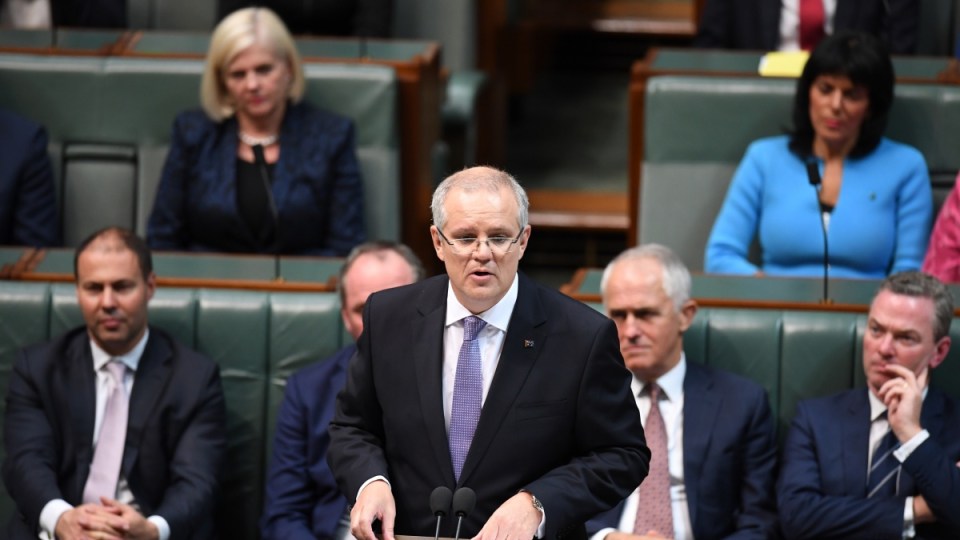 The Turnbull government has gambled its fortunes on a big-spending, big-taxing budget as it seeks to unwind the damage of the Abbott years and reclaim the political agenda from the Labor opposition.

In the government’s first budget since it scraped back into office in 2016, Treasurer Scott Morrison moved to neutralise Bill Shorten’s successful scare campaigns on health and education while also slugging the banks with a new tax and launching a new crackdown on welfare recipients.

Despite some drawing comparisons to Labor, the opposition said it was a budget for “millionaires and multinationals”.

Elsewhere, business and welfare interest groups were quick to attack certain budget measures, while the medical community was largely supportive of the Coalition’s big-spending health policies.

The Business Council said plans for a new banking levy set a “worrying precedent”, while the Australian Bankers’ Association described the initiative as “naive and misguided”.

The Treasurer was steadfast in his defence of his two biggest-ticket items: an increase on the Medicare levy to fully fund the National Disability Insurance Scheme (NDIS), and a new tax on the banks that is expected to reap $6.2 billion over four years.

He also issued a warning to the affected banks – Commonwealth, Westpac, NAB, ANZ and Macquarie – saying that customers should take their business elsewhere if the costs were passed on to them.

“They can’t go and lie to customers. This isn’t a levy on their deposits,” Mr Morrison said.

Australian Bankers’ Association CEO Anna Bligh dismissed it as “policy on the run”, which would hit anyone with superannuation or a retirement income linked to bank shares.

Nearly a year after Labor’s “Mediscare” campaign, the government has pledged to set up a Medicare Guarantee Fund and reversed the freeze to the Medicare Benefits Schedule.

Mr Morrison defended the decision to hike the Medicare levy to 2.5 per cent (up 0.5 per cent) in order to meet a funding gap in the NDIS.

“This is to fund the NDIS, that’s it,” he said. “It’s to do a job and to be able to give guaranteed certainty to everyone who is relying and depending on the promise that this Parliament made.”

Australian Medical Association president Michael Gannon welcomed lifting the Medicare rebate freeze saying “the Government has claimed back a lot of the goodwill it lost with its disastrous 2014 budget”.

He said lifting the freeze from the start of July meant patients would be more likely to be bulk billed when they visit GPs and specialists.

“This means that we will not see patients thinking twice before visiting doctors,” he said.

The new welfare crackdown, which has already drawn scorn from welfare groups and unions, includes cutting payments to people who miss Centrelink appointments, while a trial to drug test 5000 dole recipients will also be rolled out.

After lowering expectations on the budget’s one-time centrepiece – housing affordability – the government has instead put the focus on a $75 billion infrastructure spend.

Labor was quick to criticise the budget’s approach to housing affordability, with Shadow Treasurer Chris Bowen saying it was a “damp squib”. Mr Morrison lamented that the government had failed to pass its attempted savings from the 2014-15 and 2015-16 budgets due to difficulties negotiating with Senate crossbenchers.

The cost to the budget – $13 billion – was “basically a Senate tax”, the Treasurer told a budget press conference. But he added: “You’ve got to rule a line and move on.”

Mr Bowen said the government had “tried to catch up with Labor” but “failed miserably”.

“If they think all of a sudden Labor gives up on health, education, housing affordability because they’ve done a little bit, they are very, very much mistaken,” Mr Bowen told the ABC’s 7.30 program.

He did not rule out supporting the hike to the Medicare levy, but denied the suggestion the NDIS was not fully funded. Labor would support the new bank tax.

Greens leader Richard Di Natale said it was “a budget that screws over young people”, noting the slated increase to university fees. But he welcomed the bank levy, saying: “It is pleasing to see the government has been dragged kicking and screaming to the revenue side of the budget.”

Senator Nick Xenophon said the budget, while “clever politically” was a “mixed bag”.

“It almost feels like a pre-election budget even though the election is two years away,” he said.

ACTU president Ged Kearney said: “Attempts to convince Australians that this budget is fair because of tiny taxes on the banks is no more than a smoke and mirrors exercise.”

Australian Council of Social Services chief executive Cassandra Goldie welcomed the change in tack on health, but said the government was “stuck in the 2014 budget mindset” on social security.