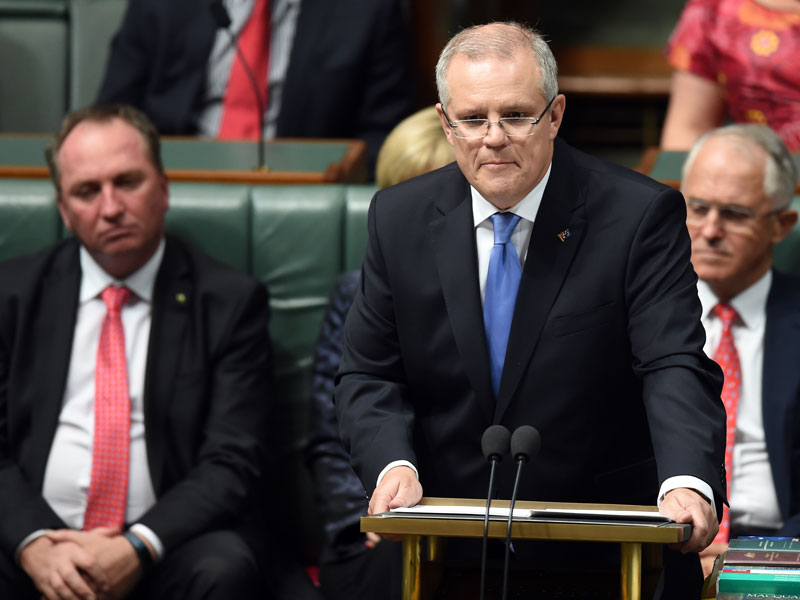 Treasurer Scott Morrison has delivered a subdued, even lacklustre first budget that offers a mixed bag of business and income tax relief, a crackdown on multi-national tax avoidance and superannuation changes that hit high income earners.

By his own admission, the Treasurer’s first budget was anything but an election-eve, vote-buyer. Mr Morrison told Parliament in his preamble Tuesday night: “This is not a time to be splashing money around.”

What followed was so understated that it was almost overshadowed by the Reserve Bank’s unprecedented lowering of Australia’s cash rate to 1.75 per cent earlier in the afternoon.

Perhaps the budget’s biggest surprise was a hit on wealthy retirees, whose tax-free superannuation accounts will be capped at $1.6 million.

The Treasurer said the measures would affect fewer than 1 per cent of superannuation fund members, and would earn $2 billion over three years.
Otherwise his Budget will neither surprise nor scare voters. In a ‘jobs and growth’ economic plan to stimulate confidence and business activity, he:

• Flagged $3.9 billion would be recovered by a Tax Avoidance Task Force over four years from Australia’s ‘diverted profits’ or ‘Google tax’ to stop multinational tax avoidance.

In his budget speech, Mr Morrison pre-empted criticism about this budget’s tax cuts for those earning over $80,000.

“By abolishing the carbon tax and keeping tax relief in our first budget we delivered a genuine tax cut for those earning up to $80,000 a year,” he said.

There would be no change to negative gearing.

“Those earning less than $80,000 a year in taxable income make up to two-thirds of those who use negative gearing. They are teachers, nurses, police officers, defence force personnel, office workers and trades people.”

Unannounced but contained in the budget papers are cuts to taxpayer subsidy to aged care providers accumulating to about $1 billion over four years.

With prior knowledge of this budget’s planned economic stimulus measures, the RBA justified the historic further lowering of rates on deflationary indicators.

“Inflation has been quite low for some time and recent data were unexpectedly low,” Governor Glenn Stevens said.

“In reaching today’s decision, the Board took careful note of developments in the housing market where indications are that the effects of supervisory measures are strengthening lending standards and that price pressures have tended to abate.

“At present, the potential risks of lower interest rates in this area are less than they were a year ago,” Mr Stevens said.

The RBA’s justification brought into question the credibility of Treasury projections of 2.5 per cent GDP growth in the next two years on which this year’s budget measures were based.

The budget papers also forecast unemployment to fall to around 5.5 per cent by June 2017. While that may reassure households it cannot be tested in time for the July 2 election, just eight weeks away.

Housing construction remains strong but is slowing and business investment, dominated by the mining industry, is shrinking.

Treasury expects non-rural commodity exports to grow by up to 7.5 per cent in two years as higher priced iron ore and LNG production ramps up.

Treasury has had to reduce by $13.5 billion its forecast of tax receipts over the next four years  since last December’s economic and financial review.

On Thursday, Opposition Leader Bill Shorten will have an opportunity to challenge these assumptions and devise an alternative plan for ‘jobs and growth’.

Mr Shorten’s challenge is to deliver a credible plan to demonstrate superiority over the Turnbull government in managing a domestic economy post-mining boom.

While there is expected to be intense debate about conflicting assessments now exposed by the Reserve Bank’s rate cut decision, the Turnbull government retains a political advantage.

It can talk over all its critics in the sure knowledge that by going to a July 2 election, its Treasury assumptions on which this budget is predicated cannot be disproved.