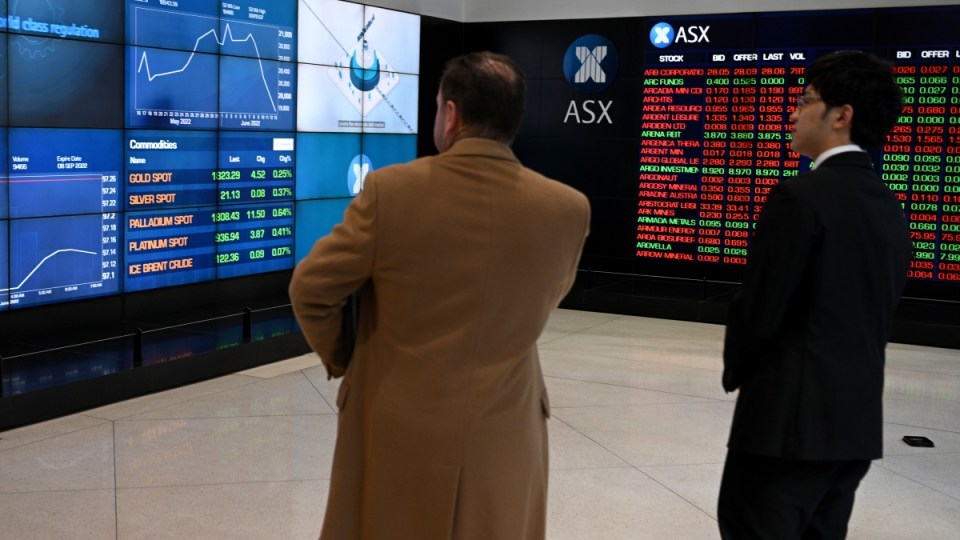 Technology stocks were the biggest losers on the ASX, followed by property and energy. Photo: AAP

The local bourse has closed lower for the sixth session in the past seven as traders digest the possibility of a supersized US rate hike overnight.

Selling accelerated in the afternoon, with the benchmark S&P/ASX200 index finishing Wednesday down 85 points to 6601.0, a drop of 1.27 per cent.

Global markets have been in free-fall since US consumer price figures released on Friday showed inflation was still raging, with many expecting the Federal Reserve to respond with its biggest rate hike in 28 years at its next meeting early on Thursday, Australia time.

“As you can see from the performance of the last two days, the market’s very much on tenderhooks, starting to anticipate that the Fed might start hiking (interest rates) a lot more aggressively than it otherwise would,” Australian Stock Report senior advisor Ben Le Brun said.

Mr Le Brun said “ironically it might be a reason for a relief rally tomorrow” if the Fed’s commentary on Thursday is more dovish than hawkish.

“We really want to get this risk event out of the way tonight before we look at the market with a fresh set of eyes,” he added.

Every sector on Wednesday was in retreat, with tech stocks the worst performers, collectively falling 3.1 per cent. Xero was down 5.2 per cent and Block 7.1 per cent.

Property trusts were the second-worst performer, falling 2.9 per cent with losses across the board.

All four big banks were lower after Reserve Bank of Australia Governor Phil Lowe said Australians needed to be prepared for the possibility of substantial interest rate hikes this year.

The Fair Work Commission’s decision to boost the minimum wage by 5.2 per cent will increase the pressure on the RBA to quickly normalise rates, RBC Capital Markets economists Su-Lin Ong and Robert Thompson said in a note.

“The global backdrop only adds to the theme of a possibly more front-loaded and higher rate path,” they wrote.

Elsewhere in the financial sector, investment giant Macquarie was up 0.5 per cent and insurance companies QBE, IAG and Suncorp were all up by between 2.2 and 3.5 per cent.

ResMed fell 2.5 per cent to $29.01 as the respiratory products company agreed to acquire German healthcare software company Medifox Dan from Hg for $US1 billion.

ResMed said it would integrate Medifox’s out-of-hospital software solutions to its software-as-a-service offering.

The Australian dollar reached a five-week low against the greenback, buying 69.07 US cents, from 69.54 US cents at Tuesday’s close.

Australian 10-year bond yields rose above four per cent for the first time since 2014, hitting 4.2 per cent. They were just 1.7 per cent at the start of the year.

ASX falls yet again ahead of Fed meeting