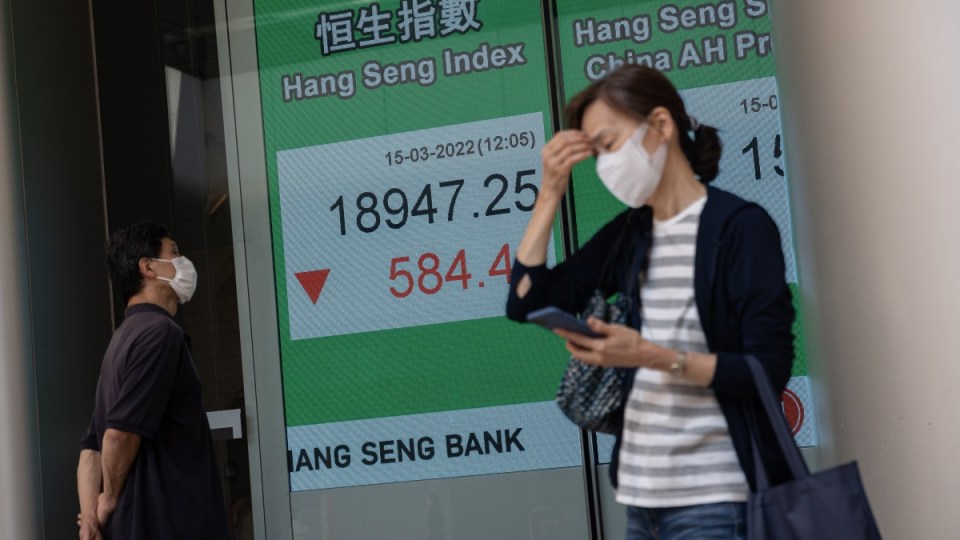 Chinese and Hong Kong stocks have surged after a huge sell-off in the previous session. Photo: EPA

Stocks in China and Hong Kong have surged after Vice Premier Liu He said Beijing will roll out more measures to boost the Chinese economy as well as favourable policy steps for capital markets.

The comments came as China shares have been pummelled in recent weeks by rising domestic COVID-19 cases, the Russia-Ukraine conflict, continued regulatory crackdowns and a widely expected interest rate hike by the US Federal Reserve.

Hong Kong stocks on Wednesday witnessed their best day since 2008 after a huge sell-off in the previous session, with tech giants logging their biggest intraday gains ever, as investors rushed to buy the battered shares.

China’s yuan also reacted to Liu’s comments and the sharp rebounds in the sharemarket. The yuan extended early gains and hit a high of 6.3460 per dollar at one point in the afternoon session, up nearly 0.4 per cent.

China will keep its capital markets stable, while cautiously unveiling policies which may have a contractionary effect, Liu said.

He also said Beijing will take measures to boost the economy in the first quarter, adding monetary policy should take initiatives to support growth.

Liu’s comments helped to ease worries that encouraging economic data for January and February were leading to complacency among policymakers in Beijing.

The central bank surprised markets on Tuesday by not cutting one of its key lending rates.

“People are concerned that (Chinese) policymakers would believe that the economy is doing much better and growth is rebounding and there’s no need for further policy easing measures,” said Ting Lu, chief China economist at Nomura.

“It is quite reasonable for the Chinese government to properly step in, maintain the basic stability of the stock market and avoid further decline,” Zhang Ming, Deputy Director of Institute of Finance & Banking at Chinese Academy of Social Sciences said in a note on Tuesday.

Zhang added this round of declines came against a very complex background, hit by “external geopolitical shocks, China-US game and malicious short-selling by international investors.”

A recent surge in infections had raised concerns about the rising economic costs of its tough measures to contain the disease.

Analysts at ING said in a note that they expected market moves in Asia to be “cautious” ahead of the Fed meeting. Investors are expecting the US central bank to raise interest rates later on Wednesday for the first time in three years, by at least 25 basis points, amid soaring prices.