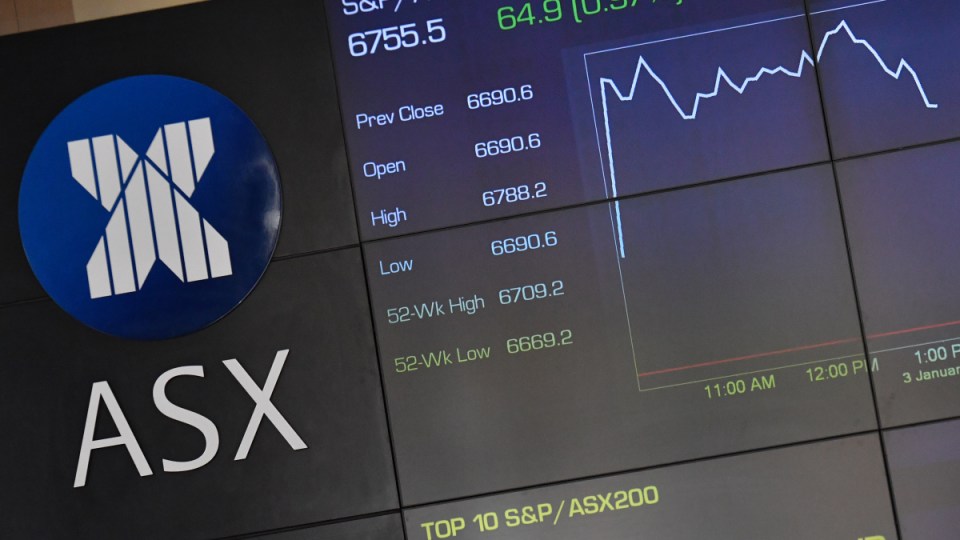 Trading on the ASX was halted just half an hour after it opened on Monday. Photo: AAP

Trading on the Australian share market has been out of the action for most of the day because of a technical glitch.

The local market got off to a strong start with all sectors higher led by real estate firms, miners, banks and oil stocks but the Australian Securities Exchange announced that trading had been paused shortly after opening because of “market data issues”.

A message displayed on the ASX website said the market was paused while the exchange investigated the problem.

“ASX apologises for the disruption and is working to rectify the issue as soon as possible,” it said.

At 11.58am AEDT, the ASX said it had identified the issue which caused the market outage.

But at 2.28pm AEDT, the market operator said it was still working to fix the issue, its ninth update of the day.

Some users were not happy, responding with sarcasm, with the market outage coming soon after the ASX revamped its website amid complaints about the new format and functionality.

Another user helpfully suggested, “Turn it off & on again.”

Buy now, pay later firms lost ground after a new report by the corporate regulator found that one in five consumers who use the services are behind on their repayments.

ASIC found that in the 2018-2019 financial year, firms like Afterpay and Zip made $43 million from customers who were not able to repay on time.

China and Japan bounce back from coronavirus

Markets rallied in Asia with the Nikkei 225 index up 1.7 per cent to 25,805 and the Shanghai Composite up 0.6 per cent to 3331 at 2.30pm AEDT on renewed hopes of a coronavirus vaccine and good economic data.

China’s industrial output rose by a faster-than-expected 6.9 in October from a year earlier, expanding for the seventh month in a row as the economy quickly recovers from the coronavirus slump and global demand picks up.

Retail sales rose 4.3 per cent last month from a year earlier compared with 3.3 per cent in September.

Japan’s economy expanded at the fastest pace on record in the third quarter as it rebounded from its biggest post-war slump because of the coronavirus.

A rise in exports and consumption helped the economy grow but analysts warned that the sharp bounce back was from a recession caused by the pandemic.

The Japanese economy expanded by an annualised 21.4 per cent from July to September, the first increase in four quarters.

The economy contracted by nearly one-third on an annual basis over the second quarter amid a coronavirus lockdown.

On Friday on Wall Street, the Dow Jones index put on 1.4 per cent to 29,480 on upbeat earnings reports and hopes for a successful COVID-19 vaccine.

Shares in media firm Nine Entertainment have dropped nearly 2 per cent after it told the stock exchange that chief executive Hugh Marks will resign during the second half of the current financial year.

On Saturday, Mr Marks told Nine’s Sydney Morning Herald that he was in a relationship with former Nine executive Alexi Baker, a former subordinate.

The news came ahead of an email to staff where he announced he was stepping down.

In an interview with the Australian Financial Review, Mr Marks said intense gossip about his new relationship had pushed him to announce his resignation over the weekend.

He admitted the board was only told about his new relationship last week and said any conflicts of interest were handled appropriately.

In a statement, Nine said Mr Marks would “actively continue as group CEO” while the board looked for a new boss to take the company through the next stage of its development.

Mr Marks said with almost half of the company’s earnings from digital assets, he was confident it was the right time to announce his retirement.

“When I was appointed CEO five years ago, my brief was to lead the transformation of what was then a television business, to a digitally based media company,” he said.

“We have achieved so much in that time frame. Bringing together three legacy media businesses, each with their own structural challenges, and investing in the assets that will ensure our position at the forefront of Australia’s media future.”

“The transformation of Nine to a multimedia and digital business has been all-encompassing and we now have an unreplicable suite of assets, fit to lead us through the digital age,” he said.

“We respect Hugh’s decision, allowing us plenty of notice to work through the next few months, and enable an orderly transition. We wish him well in all his future endeavours.”