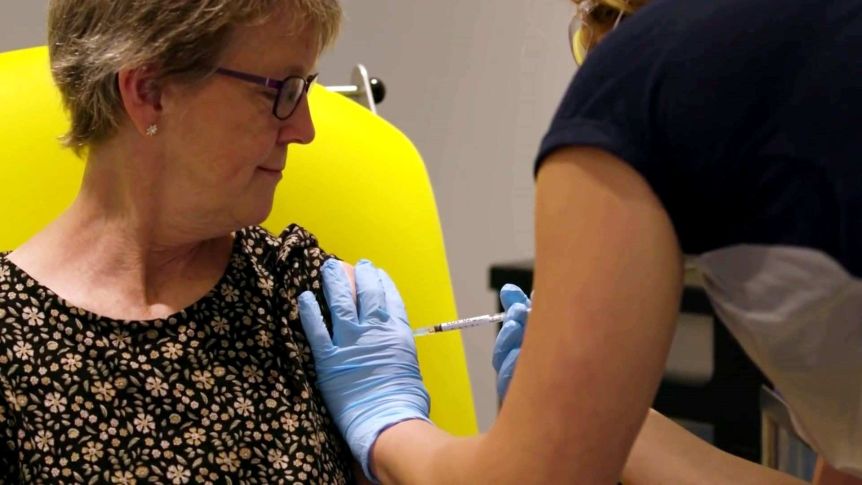 Australian shares have risen to their highest level since the start of the COVID-19 pandemic, buoyed by pharmaceutical company Pfizer announcing early success in a vaccine trial.

The pharmaceutical firm, along with partner BioNTech, said initial results from tests of their experimental COVID-19 vaccine found it could be more than 90 per cent effective (although there is some fine print).

Investment firm Morgan Stanley said in a note that the effectiveness of the potential vaccine was better than expected.

We look forward to tolerability and safety details, which have not yet been disclosed,” it said.

In early trade on Tuesday, the ASX 200 index rose nearly 2.2 per cent to 6438. That was its highest point since March 5, weeks before the federal government implemented national lockdowns.

The benchmark index later came off its morning highs and closed at 6341.

Sectors that have been hard hit by the coronavirus shutdown surged, while pandemic winners such as tech stocks and gold miners slumped.

The best-performing stocks of the day were in the education sector, with education firm IDP Education up 10 per cent.

Energy stocks also led the gains, as prices rose on optimism that economies could reopen further and increase demand for fuel.

Technology firms, miners and consumer stocks were sold off.

The biggest loser of the day was NEXTDC, a technology company that specialises in outsourcing and connectivity. It was down 13.9 per cent.

Gold mining company Ramelius Resources was also down (-13.3 per cent) and healthcare firm Fisher & Paykel was down 12.8 per cent.

The Australian dollar came off its overnight high of 73.40 US cents.

The firm said quarterly sales rose by 12 per cent, thanks to a sharp recovery in the US as home building rebounded strongly.

It reaffirmed its operating profit forecast for 2021 at up to $420 million and said it expects to resume paying dividends this financial year.

Fertiliser and explosives maker Incitec Pivot saw annual net profit fall by 19 per cent to $123 million for the year to the end of September.

Its shares lost 2.3 per cent as it did not pay a final dividend.

Real estate firm Domain said business has improved over the past few months from the last quarter of the 2020 financial year.

The National Australia Bank said business confidence rose to its highest level since mid-2019, led by a large gain in Victoria as coronavirus infections fell and the lockdown was eased.

Business confidence rose 9 points to 5 index points, but business conditions only rose 1 point over the month.

NAB said while the survey results were encouraging, there were notable declines in South Australia, Queensland and Western Australia.

The survey showed the economy has rebounded from the sharp fall in activity over the first half of the year amid government lockdowns and business shutdowns.

NAB chief economist Alan Oster said the improvement in confidence was encouraging, but remained fragile, and was likely to stay that way until there was a vaccine.

“Business conditions saw a marginal improvement in the month. Trading conditions and profitability continue to improve as the economy opens up,” he said.

But employment continues to lag and is still negative, suggesting at face value there has been ongoing job shedding.”

The vaccine news raised hopes of a quick recovery from the coronavirus pandemic, which has shut down the global economy and killed more than 1.2 million people, including more than 230,000 Americans.

Companies hit hardest by months of travel bans and lockdowns – like airlines and cruise operators – soared.

Stocks were also boosted by the victory of Democrat Joe Biden in the US presidential election, which investors see as positive for global trade.

In contrast, shares in technology and other companies seen as “stay-at-home” winners in the pandemic were lower or made limited gains.

The Dow Jones Industrial Average finished off its highs but still rose by nearly 3 per cent or 835 points to 29,158.

It climbed to a record high during the session, up nearly 6 per cent, or more than 1600 points.

The Nasdaq Composite rose by a much smaller amount during the session and slumped in late trade, after US Senate majority leader Mitch McConnell said Congress should pass a limited coronavirus stimulus bill by the end of the year, rather than the $2 trillion relief bill that the Democrats want.

There are questions left in terms of how quickly Pfizer can get their vaccine to markets all around the world,” he said.

“But today’s market move suggests … we checked a box in terms of reducing some risk as we look ahead in terms of economy.”

Global leaders welcomed the US election results, congratulating Mr Biden even as incumbent Donald Trump refused to concede and vowed to challenge the result.

The US Federal Reserve warned in its latest Financial Stability Report that the North American economy may face a wave of debt defaults and “significant declines” in asset prices because of the coronavirus recession.

“As many households continue to struggle, loan defaults may rise, leading to material losses”, the US central bank said.

Oil prices jumped nearly 10 per cent on the vaccine news and after an OPEC output deal fuelled optimism about rising demand.

Gold prices fell as investors turned away from safe havens to riskier assets.