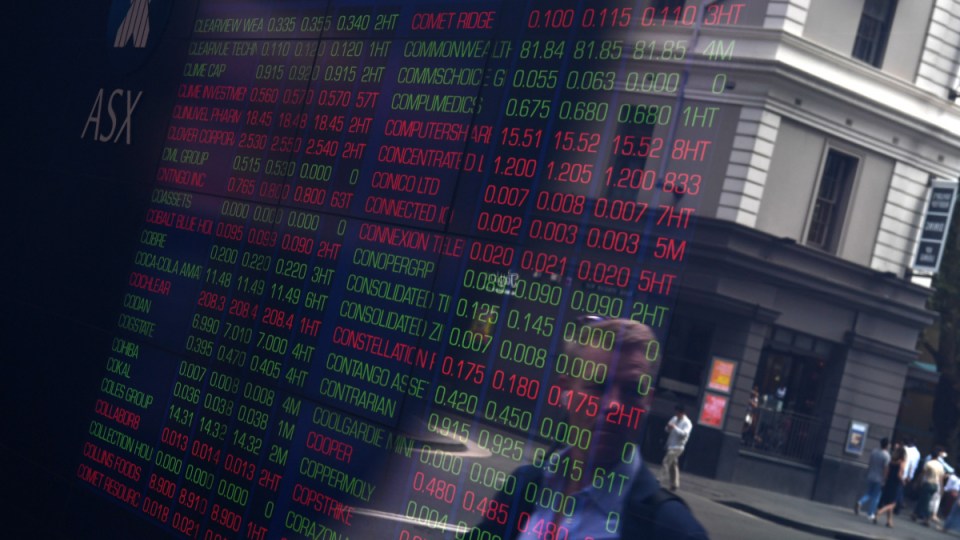 The market slumped to its worst opening since the GFC with more than $120 billion wiped off in the first minutes of trade Photo: AAP

The Australian share market has lost more than $100 billion in Monday’s trade so far, amid the economic fallout from the coronavirus and an oil price war.

At the same time, the Australian dollar briefly tumbled to just above 63 US cents – the lowest level since the global financial crisis – in what currency strategists have called a “flash crash”.

Overall, it has been the worst day of trade since October 2008, when the GFC took hold, and the rout is hammering share portfolios and superannuation balances.

Australian shares closed down 7.4 per cent, which equates to more than $130 billion in paper losses.

The rapid spread of the coronavirus and a collapse in the price of oil have driven the latest big sell off on the Australian share market with oil stocks suffering huge losses.

Commsec market analyst James Tao said the market was facing its worst trading day in more than a decade.

“It’s on track for the worst daily decline since October 2008,” he said.

“We’re seeing the market push below 5,900 points for the ASX 200 which is the worst levels in 13 months since about February of last year.”

On October 10, 2008 markets plunged in what was labelled as “black Friday” when the start of fears of a global recession sparked drops in Asian markets and on Wall Street and the S&P 500 stock index fell nearly 8 per cent.

A “flash crash” is a fall caused often by technical issues. It can deepen losses because of the widespread use of computer generated trading across global share markets.

The currency since recovered to above 65.6 US cents – still down around one US cent on Monday – which spells bad news for those planning on travelling overseas.

The Aussie dollar is falling because China, Australia’s major trading partner, is at the epicentre of the coronavirus outbreak which has the global supply of products and services used by industry and consumers.

It is also falling because the Reserve Bank is expected to further cut interest rates to help boost the ailing economy.

Australia’s economy is taking a multi-billion dollar hit from both the coronavirus and the bushfires. The RBA cut official rates to a new record low of 0.5 per cent last week.

Treasurer Josh Frydenberg worked to dampen fears about the market plunge, saying volatility was not uncommon.

“As you will be aware, there are many factors behind movements in equity markets,” he said.

“And I note that some announcements by the Russians and the Saudis in relation to oil overnight, and we’ve seen a steep drop in the oil price in recent weeks.

“So there are a number of factors at play when it comes to the equity markets, but our financial system remains strong, our economy remains strong.

“This is a very different situation to what we saw through the GFC, which was essentially, a problem with the banking and the financial system and issues of liquidity.

“We haven’t seen those same problems in relation to this health crisis. What we have seen is a supply and demand side constraints, and that’s where our [stimulus] package will be focused.”

C-M-C Markets strategist Michael McCarthy said the stock market rout was far from over even though shares had fallen sharply from their record highs.

“Because at some stage in the future there will be a brighter outlook and a time to buy,” he said.

“However, it doesn’t look like that today given the heavy volume of selling and the damaging falls that we’ve seen.”

Oil stocks have led the losses, with the ASX 200 index in the red across the board.

Investors are turning to gold as a safe haven – Newcrest Mining has jumped 5.6 per cent to $30.75.

ASX closes down 7.4 per cent in worst day since global financial crisis