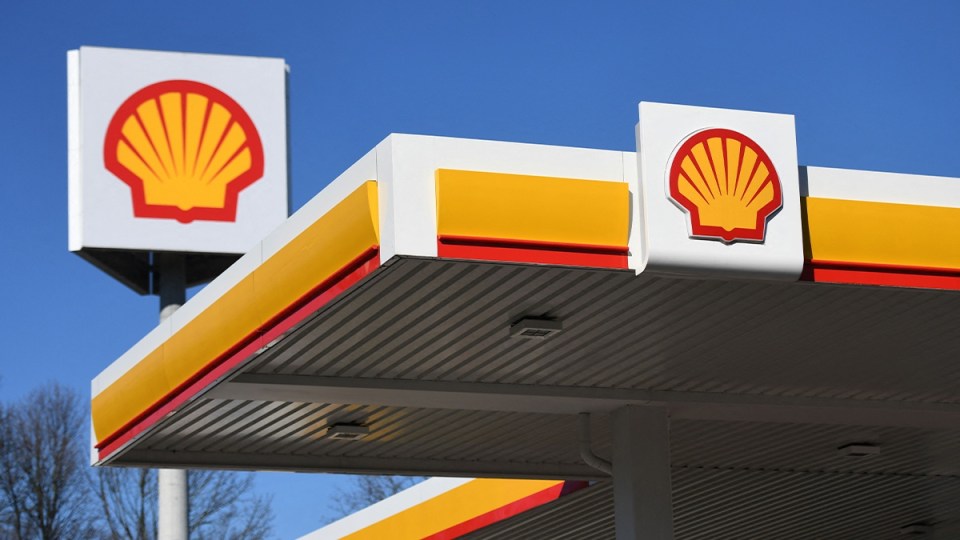 A $2.9 billion fuel tax holiday designed to ease record-high petrol prices has failed to deliver for many motorists because oil companies fattened their profit margins, new analysis has found.

Figures from Fueltrac show the gap between wholesale and retail petrol prices widened in many cities after the petrol tax was halved in March – and did so again in July.

Fueltrac CEO Geoff Trotter told The New Daily the discrepancy shows hundreds of thousands of motorists, particularly those across regional areas, did not fully benefit from lower oil prices as retailers passed on the excise cut.

Mr Trotter argues the 22.1 cents per litre (cpl) tax holiday made it easier for service stations to reduce bowser prices without passing on falling wholesale costs.

It brings into question whether six months of government support actually saved motorists 22.1 cpl over what prices would have been otherwise – without $2.9 billion of taxpayer funding.

The fresh analysis comes amid debate about whether the tax cut should be extended beyond its expiry date in September, with Opposition Leader Peter Dutton leading calls for additional relief.

Mr Trotter branded the cuts a waste of taxpayer money.

“It shouldn’t be extended. It has been a waste of time and taxpayer money,” he said.

“Oil companies have pretty much converted the cut in excise and the drop in international oil prices into increased profit margins.”

There is no suggestion that a large number of retailers failed to pass on the fuel excise cut itself.

Rather, Mr Trotter said the tax cut has enabled retailers to retain lower oil prices in their margins without passing on additional relief to motorists.

Fueltrac data shows the gap between wholesale and retail costs has widened at several points since March, boosting profits at service stations (many of which are controlled by big oil companies). 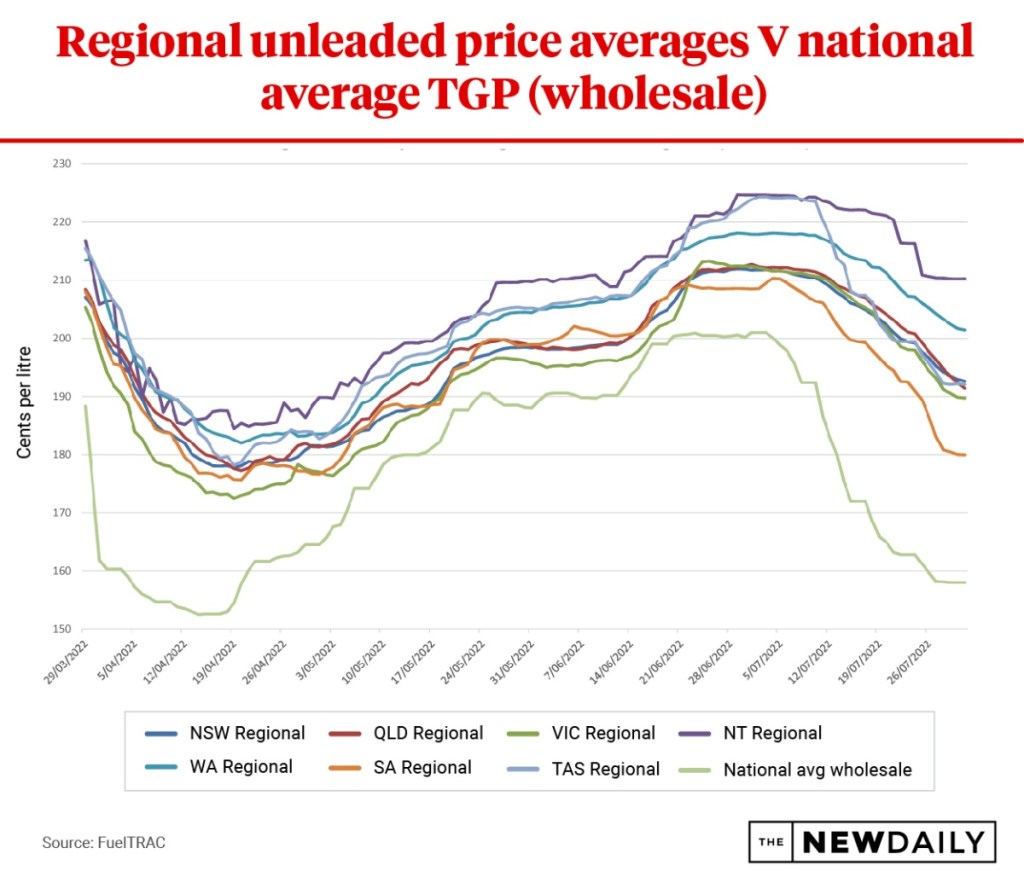 Mr Trotter said motorists in towns like Alice Springs in the Northern Territory, and Longreach and Cloncurry in Queensland were particularly short-changed as oil prices have fallen.

The difference can also be seen in some capitals, particularly across smaller cities like Hobart and Darwin.

“What’s happened is there has been drops in some capitals – Brisbane, Sydney, Melbourne, Adelaide and Perth – but no significant drop in Darwin, Hobart or most regional places,” Mr Trotter said.

In the days after the March budget, average petrol prices across regional centres fell sharply, often in excess of the 22.1 cpl – but wholesale (or terminal gate prices) fell by even more.

And after global oil prices peaked in June a similar trend occurred, with retail prices easing off during July, but not by as much as wholesale costs as demonstrated in the below graphic.

The terminal gate price is not a perfect measure of retail margins, but does reflect changes in global oil prices, which are the predominant factor in determining the petrol prices motorists pay.

He said it’s clear the fuel excise cut has not delivered enough value for taxpayer money.

“[But] it’s perfectly plausible and suggests some of the excise cut has been held onto.” 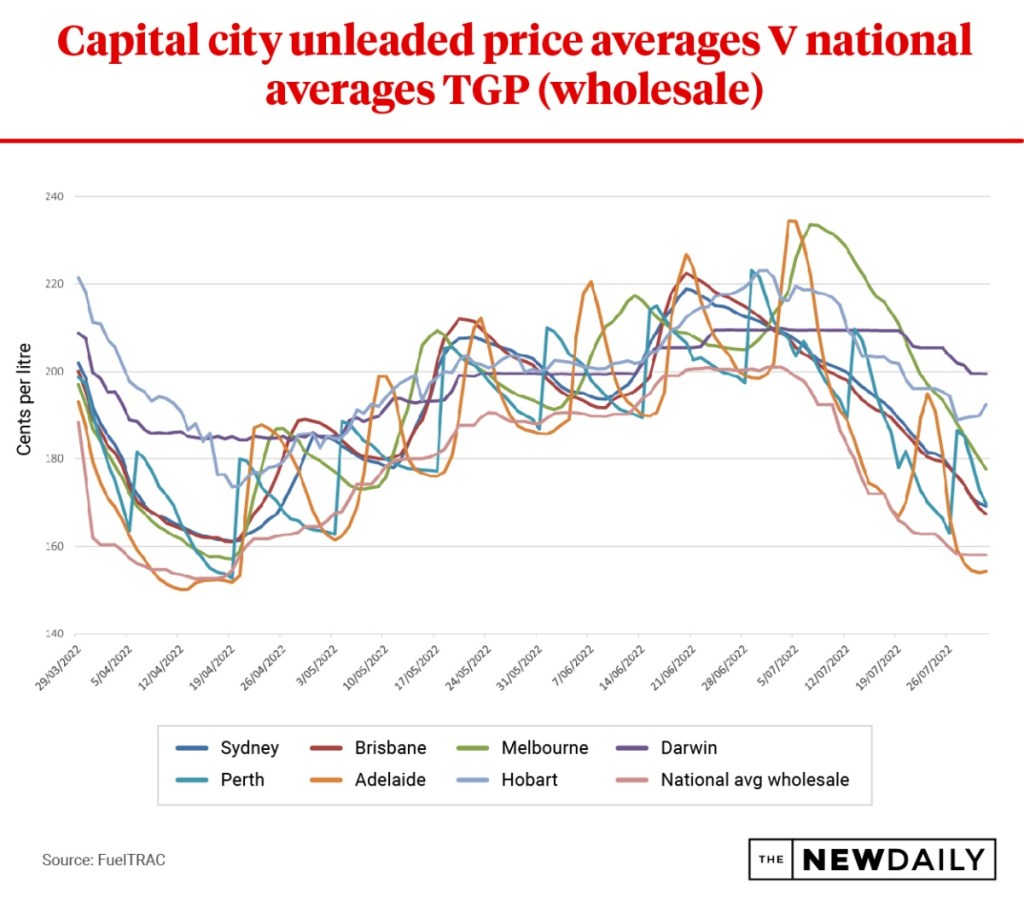 Petrol prices to rise in September

Despite data indicating retailers used the fuel excise cut to fatten their margins, Mr Trotter expects prices will rise by the full 22.1 cpl amount when the tax holiday expires in late September.

It could send average prices back above $2 a litre, even though global oil prices have been falling lately on the back of fears about a global economic slowdown.

The Coalition, which introduced the temporary tax holiday in March before the federal election, is leading calls for the excise cut to be extended.

Mr Dutton this week said “Labor is preparing to make a bad situation worse” by failing to extend tax relief.

The government is resisting those calls, with Treasurer Jim Chalmers all but ruling out an extension in interviews this week, saying the budget  cannot afford the burden.

Professor Holden said extending the excise cut would actually worsen inflation and would be economically irresponsible.

“The recent federal budget tipped really quite a lot of money into the economy and this fuel data speaks to whether it actually even had the intended effect,” he said.

“It definitely had an inflationary effect.”