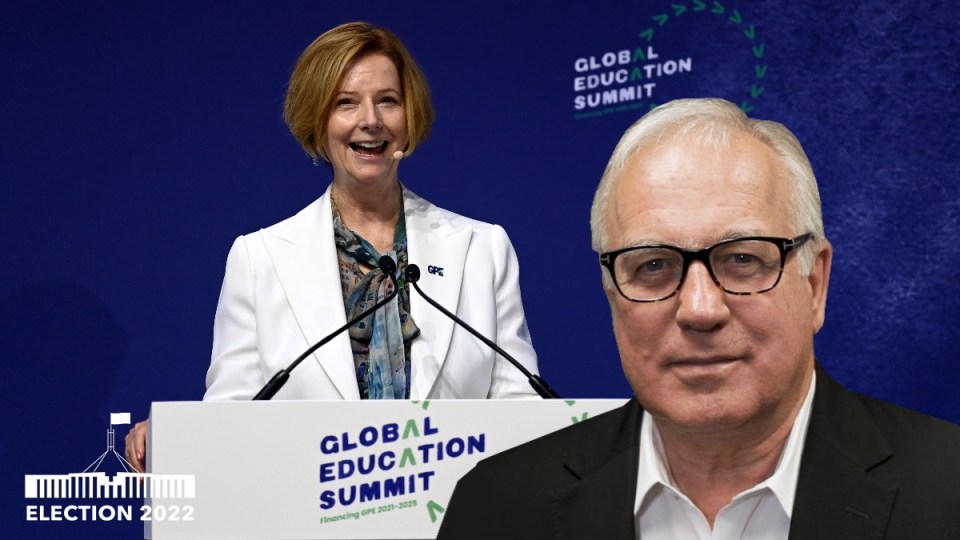 It’s tempting to think the Coalition lost the election purely because of climate change, as I foreshadowed here in April, but there’s much more to it than that.

Women rose up and voted as a group, mostly for the future of the planet, but also for integrity and the better treatment of women.

And while Julia Gillard hardly figured in the campaign, her treatment 10 years ago at the hands of men in both major parties was the unexploded bomb that finally went off on Saturday.

Australia’s only female prime minister, so celebrated and loved by Australian women, was torn down first by Tony Abbott, and then by Kevin Rudd.

Her treatment was flagrantly sexist and unforgettably nasty, and Australian women have not forgotten: For them revenge is a dish served cold.

Here’s how the total primary vote of the two major parties have declined since then:

At the 2022 election, the major parties were led by four men – Morrison, Frydenberg, Albanese and Marles – with women barely visible.

This year Labor has the lowest primary vote in its history – lower than when it lost in 2013. It won government because of preferences from women who couldn’t bring themselves to put Scott Morrison’s Liberal candidate second.

The Morrison government’s treatment of Brittany Higgins and its refusal to have quotas for female pre-selection merely served to reconfirm the view – formed from the treatment of Julia Gillard 10 years ago – that the Coalition is fundamentally sexist, and unable to properly deal with women’s status and safety.

The Labor Party has more women in Parliament thanks to quotas, but when Tanya Plibersek stepped down as deputy leader after the 2019 election, Labor’s right faction couldn’t bring themselves to replace her with Clare O’Neil and instead went for Richard Marles, another bloke.

So now six female teal independents will replace Coalition men in safe Liberal seats, and there looks like being at least nine female cross benchers in Parliament.

They may not have the balance of power this time, but unless both major parties do something very different in the next three years, the current trend will see them with less than two-thirds of the primary vote for the first time, and independents with the clear balance of power.

Meanwhile, the Coalition now needs to have a good hard look at itself.

The bulldozers in the Murdoch newspapers and on Sky News will urge the Liberal Party to shift to the right and double down on climate change scepticism, which would deliver it into complete oblivion, instead of just a big loss.

Last week the World Meteorological Organisation reported that the global mean temperature in 2021 was 1.11 degrees above the 1850 to 1900 average.

With just that amount of warming, we have seen the bushfires of 2019, the floods of 2022 and over the past few weeks horrendous heatwaves in India that have caused dehydrated birds to fall out of the sky.

By the time the next election is held in 2025, the amount of warming will be greater than it is now, and the weather events will be more extreme and more frequent.

Scientists will have confirmed that we are heading for 2 degrees of warming, not the 1.5 degree aspiration of Paris and Glasgow, which will be catastrophic for large parts of Australia and the world.

Any political party anywhere still pushing for the burning of fossil fuels in 2025 will be ridiculed and unelectable.

And by the way, the latest refrain of the anti-warmists in News Corp and the National Party is that nothing Australia does can affect the temperature of the planet because our emissions are tiny compared with China, the US and Europe.

The seed of the Liberals’ downfall

Quite true, but it’s the litterbug defence: It’s just one coffee cup, officer, no real harm done. Any politician who seriously tries that one will be looking for a job as a Murdoch opinion writer.

The Coalition gave up the ghost on climate change in September 2018 when two weeks after he took over as leader, Scott Morrison dumped the National Energy Guarantee developed by Josh Frydenberg – the last vestige of an effective policy.

In doing that, and refusing to legislate the Paris emissions-reduction target, Morrison set the Liberal Party on a course for electoral disaster.

He should have lost in 2019 but Bill Shorten frightened the nation’s retirees with the loss of franking credits. That election was like 1993, which John Hewson should have won but managed to lose with Fightback! and his plan for a GST.

At that time there was a bipartisan consensus about the need to do something about global warming, but after winning the 1996 election, John Howard joined the United States as the only two countries refusing to sign the 1997 Kyoto Protocol.

Al Gore’s 2006 film An Inconvenient Truth briefly changed the prevailing wind, so that John Howard raised a licked finger, felt how the breeze was blowing, and went to the 2007 election promising an emissions trading scheme.

That was the last time climate change was not the defining left/right contest of Australian politics.

The Liberal Party must redefine itself

Now everyone has converged on “net zero by 2050”, or at least they say they have, but differences remain with 2030 targets, which scientists are now saying is the more important.

With a clear majority in its own right, Labor will try to stick with 43 per cent but will have to negotiate with the Greens in the Senate, so it could be forced to compromise on a higher number.

But the most interesting and consequential number now will be the Coalition’s.

What it settles on as its 2030 target will tell us whether it understands that support for coal can no longer be the thing that defines the Liberal Party.

Nor can balanced budgets and economic management, since no one cares about debt and deficits any more, or macho strength, which has been Scott Morrison’s defining election policy.

This election confirms that the Liberal Party has to redefine itself as a viable centrist party that appeals to women as well as men. It won’t be easy.