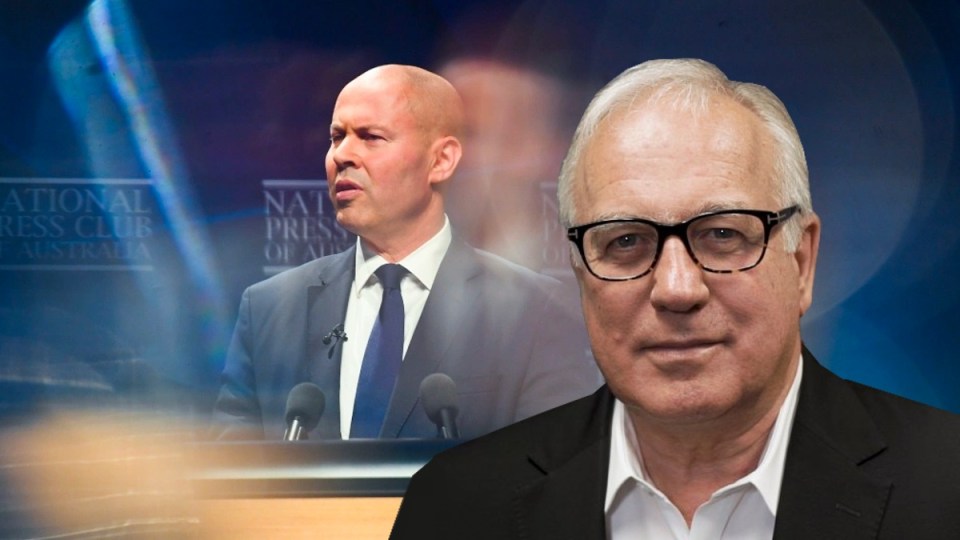 If Treasurer Josh Frydenberg loses his seat on Saturday his best legacy could end up being his commissioning of a review of Australian productivity.

He sent the terms of reference to the Productivity Commission on February 7, and the final report is due next February, which should be just about when the next government is looking for something to do.

The PC’s report will provide the Prime Minister and federal cabinet with a set of boxes; all they will have to do is tick them.

Not that there is any mystery about what’s required: Reduce child care costs, improve education outcomes, fix health care and aged care, reform the tax system, improve transport infrastructure, build a lot more social housing and take steps to improve housing affordability, create a national integrity commission to stop corruption and misuse of public money and, last but not least, put a price on carbon to sharpen the incentives for decarbonisation.

Every economist in Treasury and economic adviser in Parliament House knows all that, and there’s a library of reports and studies into productivity for what they’ve forgotten, but a Productivity Commission blueprint might focus the collective political mind and provide some cover for tough decisions.

As Frydenberg wrote in the terms of reference, “productivity growth is vital for Australia’s future”, but you wouldn’t know it watching the election campaign.

The topic has been conspicuously absent from a campaign in which both sides seem to be working overtime to avoid any discussion of difficult reform or productivity, although they have been having half a debate about wages and inflation.

“Half” because any discussion of wages and inflation is empty without productivity: It’s how wages can grow faster than prices without causing an inflationary spiral.

But neither party is proposing anything that would lift Australia’s dreadful productivity performance, which is not that surprising since they haven’t done anything about it for 25 years, so why change the habits of a political lifetime.

It used to be thought that improving productivity simply meant freeing companies from the strictures of industrial regulations and allowing them to pay less.

Now we have an inflation spike and wages growth that is being held back by weak productivity, with the result that real wages (after inflation) are going backwards, to the detriment of the economy. The only way to safely get wages above the inflation rate, so that Australians aren’t going backwards, is by lifting productivity.

And that is a job for government, not the private sector – only government has the legislative and financial power to make it happen. In some ways it’s a government’s main job, but it’s also really hard, not for lazy populists.

Productivity growth collapsed after 1998, as this chart from Treasury’s 2021 Intergenerational Report shows. 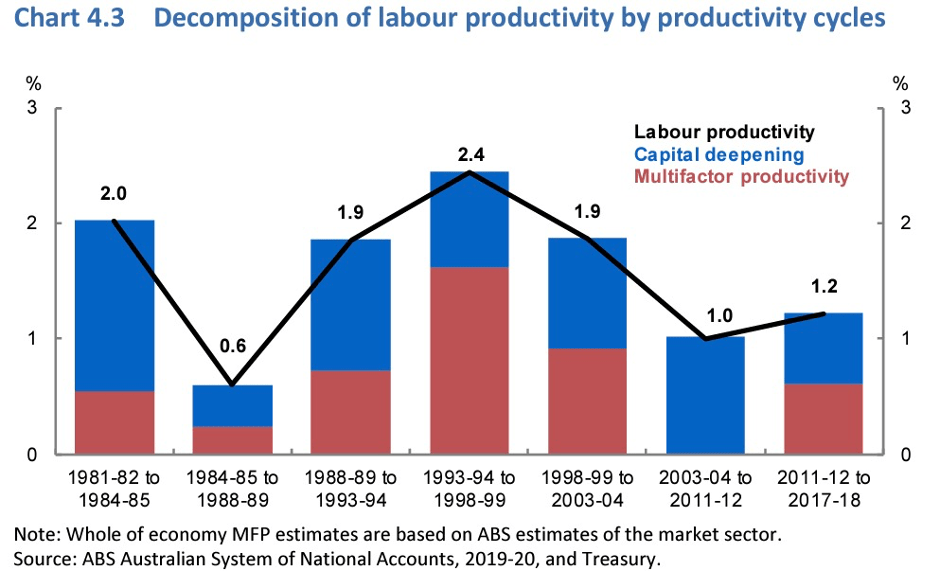 There are two reasons for that. First, Australia’s era of economic reform ended with the election of the Coalition in 1996, and second, the Asian financial crisis happened.

What does the Asian financial crisis have to do with Australian productivity? A lot.

That event in 1997-98 wiped out the middle classes of a series of developing countries like Thailand, Indonesia, Russia and Argentina, and provided a wake-up call to China.

To make sure it never happened again, emerging nations, led by China, adopted a simple but powerful set of economic policies.

They decided to build substantial foreign exchange buffers to protect their financial systems, which meant they had to run persistently large current account surpluses. To do that, you have to maintain an undervalued currency.

For some countries to run external surpluses, someone else has to run deficits, and that task fell mainly to the United States … and Australia, and we were happy to get the cheap products.

For the past 25 years, undervalued currencies in emerging markets, particularly China, as well as reduced tariffs and free-trade deals, have allowed Western consumers to buy low-priced goods and services from developing countries.

In effect, Australia and the US contracted out their productivity-improving reforms to China and other developing countries that were providing cheap labour and cheap imports through currency suppression that acted as a tax on their own citizens but built large current account and foreign exchange surpluses.

For countries like Australia and America it made life easy: Why do difficult reforms if you don’t need to? Successive governments coasted.

But because Australia’s unions were smashed and the Howard government doubled immigration at roughly the same time, wages growth fell short of even Australia’s reduced productivity growth.

However, the world is now changing and that comfortable arrangement can no longer be relied upon.

Even before Russia invaded Ukraine, China was upending the chess board, making it clear that Australia’s cosy, lucrative role as an exporter of raw materials and importer of cheap manufactures would have to be rethought.

More broadly, the world’s unipolar era, with America and its consumers at the apex of the pyramid, is over; the world is dividing back into blocs and the future of globalisation, as we’ve known it, is suddenly unpredictable.

That is being dramatically manifest in the global food crisis now emerging as a result of Russia’s blockade of grain exports out of Ukraine, but that’s like to be just the beginning of the trade disruptions.

Western countries will have to become more self-sufficient, and look to their own productivity: The time for lazy, comfortable government is over.