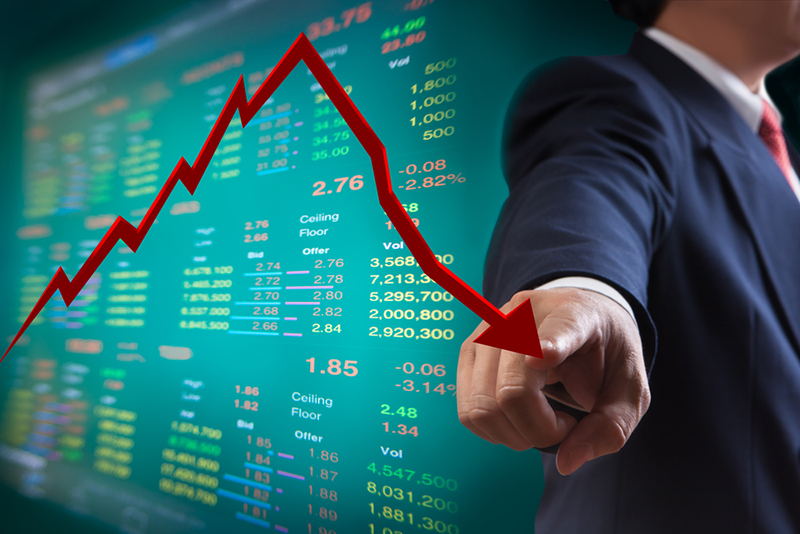 The headlines on Friday were all about share market tumbles as the Australian Stock Exchange All Ordinaries Index dived 2.7 per cent at its worst.

That loss, worth about $79 billion, will have delivered that “ouch” feeling for many investors, as the All Ordinaries recovered only slightly to close at down 2.25 per cent, or 7467.points, at the end of the day’s trading.

Nicholas Gruen, an economist with Lateral Economics, said the market is testing professional fund managers, who seemingly have been caught out and sold down shares into the fall.

“It was obviously going to happen, but when it it does there is shock among people who are supposed to be paid for their acumen,” he said.

Why is it happening?

The Price Earnings (PE) ratio, which is traditionally used to tell investors what a business is worth, is 23 times, well above the average of 15.

All that means if interest rates rise, cash investments become more attractive than shares, so the share markets fall.

The RBA’s move to push up its cash rate by 0.25 per cent on Tuesday was one indicator of the rate rise which hit the headlines and most people would have noticed. But something else has been happening out there in the arcane world of bond traders.

The 10-year Australian government bond is now trading at an interest rate of 3.5 per cent compared to 2.1 per cent in late February. In January it was 1.1 per cent.

“It’s a big jump and we haven’t seen something like this for decades. It’s something the market thought would have played out over 12 or 18 months and its happened over three months,” Laurie Conheady, bond specialist with JB Were, told The New Daily.

What that means is that the big players were paying much more for loans long before RBA chair Phil Lowe pulled the rates trigger on Tuesday, making the markets extremely brittle and ready for a fall.

Is Bitcoin the answer?

Over 2022, Australian shares have fallen 5.8 per cent, with war protecting it by pushing commodity prices higher.

But in the US, where inflation worries hit early, the S&P 500 index is down 13.5 per cent and the NASDAQ tech index is down 22 per cent.

For the past few years, as Bitcoin has boomed, its aficionados have claimed it is a separate asset class that would move under its own dynamics and do so differently to the share market.

Well, as the chart above shows, that just isn’t happening. The marque cryptocurrency is down 27 per cent since January and 46 per cent since its highs in November 2021. That means that if at either of those times you had sold shares and moved into Bitcoin, you would have lost more than you would have in shares.

And it wouldn’t have mattered whether you had Australian shares, the general US market or the NASDAQ, you would still be out of pocket in Bitcoin.

Dr Andrzej Gwizdalski, a lecturer at the University of Western Australia Business School, says the view that Bitcoin would act independently to shares was never true.

“It was a common observation that Bitcoin was immune to major disturbances and changes in the markets, but it’s been shown to be quite correlated with many markets,” he said.

However that doesn’t mean you should bail from bitcoin because, while it has often moved with shares, it has other characteristics.

“If you look at what happened during the initial COVID shock in 2020, Bitcoin fell with other stock markets but it recovered much more quickly and to a greater extent,” Dr Gwizdalski said.

That makes bitcoin a different type of asset to shares even though, at times, it will move with the share market.

“It was recognised by [investment banker] Bank of America Merrill Lynch as the best performing asset class over a decade and performed way above other asset classes,” Dr Gwizdalski explained.

But of course the volatility of Bitcoin makes it a speculative investment, especially for people who can’t stay with it for the long term.

So what can you do now?

It depends on your situation, but if you can hold on to your investments that could be the best option in the long term.

David Bassanese, chief economist with BetaShares, says “at the moment cash is king and if there is a major selloff and bear market there are very few places to hide”.

However, if markets fall significantly then yields on shares could become attractive.

Other equities will also increase dividend yields as markets fall.

If you do want to go to cash, or you have some to invest, you’ll get a better deal now than for some time. Canstar figures show bank deposits are paying as much as 3.5 per cent and term deposits 0.61 per cent for two years.

Unvaccinated Pauline Hanson has COVID
‘Should have been a penalty’: Boy crash-tackled by PM gives his verdict
Amber Heard’s sister and friend give evidence
Russian Google to file for bankruptcy
Man arrested at NSW school for bestiality
Concern about COVID-19 deaths in aged care
Big US rate hike a warning for Australia
Today's Stories

Sharemarkets are falling, but Bitcoin is falling faster, at least for the moment