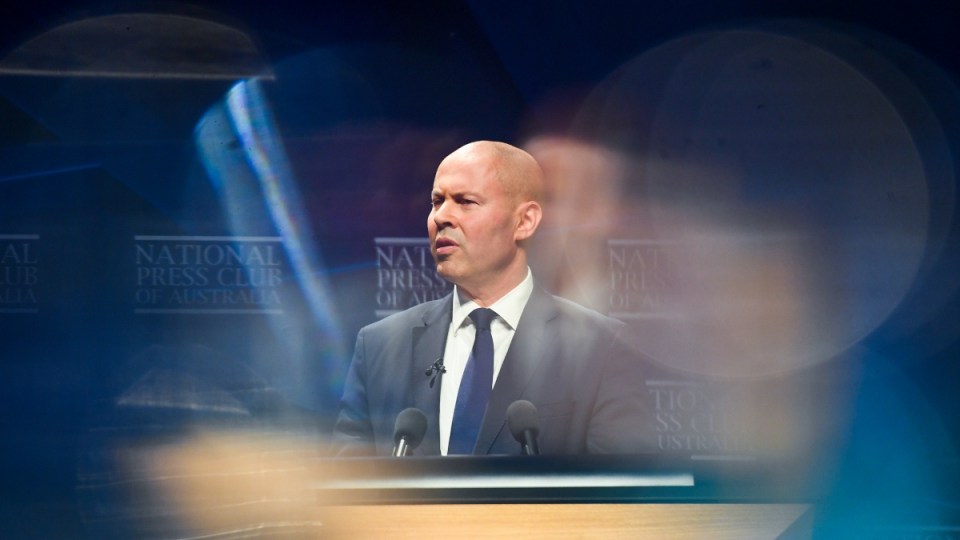 The budget shows the government only has eyes on the election. Photo: AAP
opinion

Josh Frydenberg’s pea-and-thimble budget is worse than it looks, even more cynical than it appears – and a budget that headlines a $420 “tax cut” this year to hide a $1500 tax increase the following year looks very cynical indeed.

What’s tucked away in a single overlooked chart is the Treasury’s forecast that our economic recovery, the one supposedly “leading the world”, hits the wall next year.

From strong 4.75 per cent GDP growth this calendar year, Treasury quietly thinks we’ll drop to a dud 2 per cent growth rate in 2023.

But by then, the economy won’t be Mr Frydenberg’s responsibility. Contrary to the front page headlines of the nation’s newspapers on Wednesday, this isn’t a budget trying to grab votes to win the May election. It’s a budget just trying to limit the size of the loss.

In many ways, Table 2.2 summarises the spin, illusions and delusions of Josh Frydenberg’s fourth budget.

“Despite the challenges, our economic recovery is leading the world,” the Treasury proclaimed on Tuesday night.

Well, yes, but only for the moment. As the Treasury chart shows, we lagged the world in 2021 and we’ll be lagging again in 2023.

One out of three is bad, Mr Meatloaf might conclude. And anything beyond 2023 is more a hopeful guess than a credible forecast.

It looks suspiciously like this one chart escaped a little massaging by the econocrats’ political masters.

Marrying the calendar and financial year numbers, it appears the first half of the new financial year has been front-loaded with cash-splash outcomes while the second half of 2023-24 is being given the benefit of a large dollop of forecasting optimism.

Once alerted to the game, it’s not hard to find indications of how it has happened.

Given the downturn in new building approvals and the expectation that the backlog of building activity pulled forward by the government’s HomeBuilder grants will be mainly cleared this calendar year, the contraction in dwelling activity will start in 2023.

Somewhat similarly, the pull-forward of business spending encouraged during the worst of the pandemic and given another rev-up on Tuesday night is not sustainable.

There are only so many laptops, utes and coffee machines that businesses need to buy for a while. Thus, it’s likely most of the forecast 9 per cent increase in business investment in 2022-23 will be occurring in the first half of the financial year. Treasury expects business investment growth to drop to a feeble 1 per cent over 2023-24.

Given the election-focused nature of Mr Frydenberg’s cash splashing and the reality of real disposable wages continuing to go backwards as interest rates start rising, it’s not a surprise that business investment drops off.

The three big-ticket items dominating budget headlines all provide only the most temporary of stimulus as the politicians seek to avoid the “cost-of-living” damage they’re being told about.

Already noted, that $420 extra tax offset is promised for July/August this year, to be followed by an effective $1500 tax increase the same time next year.

The halving of fuel excise to be seen to be doing something was also designed to be noticed in the election campaign and be gone not long thereafter.

Ditto the $250 handouts to welfare recipients that start rolling out late next month, just in time to be noticed as the election date looms.

And while the Morrison/Frydenberg government is throwing spending petrol on an economy already running pretty hot, the Reserve Bank is about to start increasing interest rates.

Josh Frydenberg has just done his bit to encourage the RBA to start lifting interest rates sooner rather than later. A series of rate rises running into 2023 will be another factor in the economy hitting a pothole.

The bigger, broader failure of the government of course is that the hundreds of billions it has sprayed around during the worst of COVID has mainly been done as sugar hits, not as investments in sustainable growth.

Instead of spending on urgently needed social housing as most economists recommended – a lasting investment of benefit to the nation – we got HomeBuilder, $2.1 billion that mainly went to people who didn’t really need it.

Instead of stepping up investment in sustainable energy, we’re getting a gas-fired power plant that the industry says we don’t need, subsidies for further gas exploration and a billion-dollar carbon credit racket.

Instead of prioritising government funds for the most urgent and productive purposes, we’ve had nine years of systemic political corruption, amounts large and small showered on favoured electorates rather than giving the nation the most bang for every buck.

And the Morrison government is going down rorting. As the Australian Financial Review reported on the latest infrastructure announcement:

“The federal government’s $17.9 billion infrastructure splurge is tilted towards Coalition-held seats and marginal electorates Scott Morrison must hold at the May election, with almost 40 per cent of NSW’s funding allocated to one must-win electorate.

“Some marginal electorates have received a disproportionate share of funding in the pre-election spending spree, with voters in the must-win seats of Boothby in South Australia and Dobell in NSW offered billions in road and rail upgrades.

“Mr Morrison announced the $17.9 billion in spending for new and existing infrastructure projects on Monday, but analysis of the commitments by The Australian Financial Review shows the package has been crafted with May’s election front of mind.”

Standard Morrison government operating procedure. And that’s before the wholesale boondoggling to get the National Party’s begrudging OK of a substandard climate mumble in Glasgow.

What is worse again is the opportunity cost of money not spent where it is needed, of the return on better investments foregone.

In the end, the best a government can do for its people is invest in them. Instead, to quote the budget papers:

Yes, universities, hit particularly hard by COVID, continue to be punished by the Morrison government for not producing its sort of people.

Australia’s recreation and culture sector also was very wounded by the pandemic and, like the universities, received little help while excess billions flowed to Harvey Norman and other businesses not required to hand it back.

And, like universities, recreation and culture continues to be punished. The budget papers again:

Well, you know, those industries are just full of Labor and Green voters.

The poor old ABC was so grateful not to have its funding cut again in nominal terms, it smiled and pretended to enjoy going backwards in real terms. According to the budget papers again, the “broadcasting sub-function” expenses will fall by 1.7 per cent in real terms from 2021-22 to 2022-23 and by another 4.9 per cent to 2025-26.

I’ve been reading budget papers since I returned to Australia in 1979 and joined the Australian Financial Review. This is the worst I’ve seen, surpassing the lamentable 2007 effort when John Howard and Kevin Rudd were outbidding each other for votes.

This is a miserable budget, lacking integrity, conceived in cynicism, designed to help a political party, not the nation.