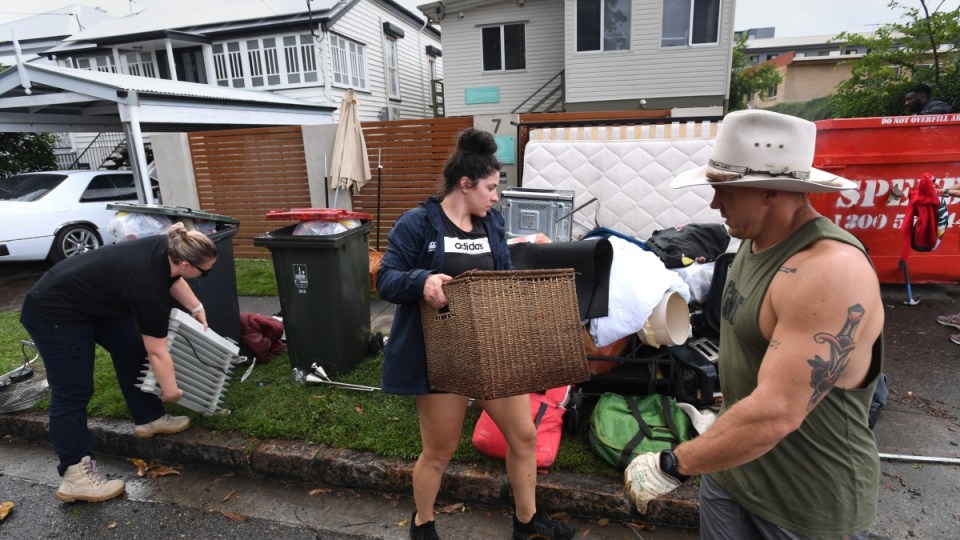 Getting south-east Queensland fully back on its feet will likely take months. Photo: AAP

A colossal clean-up effort is under way across northern New South Wales and Queensland after thousands of once-idyllic riverside homes were submerged in Australia’s latest flooding crisis.

The sense of deja vu is obvious – more than 10,000 volunteers helping their neighbours pick up the pieces are going by ‘Mud Army 2.0’, referencing the heroic clean-up efforts after Brisbane’s 2011 floods.

This second call to action is a heartwarming yet ominous moniker; because as any climate expert will tell you, this won’t be the last time the mud army is called into service.

As the climate crisis makes natural disasters more frequent and severe, once sought-after homes from the banks of NSW’s northern rivers region to the Gold Coast in Queensland are facing some thorny challenges.

And the current flood clean-up is just the start.

Experts said the latest catastrophe will be further fuel for already rising insurance premiums and harder-to-obtain mortgages in areas most vulnerable to a warming planet.

Ultimately, it means these properties to which Australian families used to aspire could plunge in value, reflecting their exposure to more frequent catastrophic flooding events.

The insurance bill behind the latest flooding alone will be staggering.

More than 70,000 insurance claims have already been made, the Insurance Council of Australia says, with early estimates suggesting at least $1 billion in costs.

It will compound more than $4 billion of insured losses to flooding over the past decade across Australia, and more than $20 billion in average annual economic costs from natural disasters.

And by 2050 this annual cost is expected to balloon to $39 billion as the climate crisis renders meaningless historicisms about one-in-a-1000-year floods and bushfires.

Karl Mallon, chief executive of risk assessment firm Climate Valuation, is working with major banks like Westpac to understand what these costs mean for areas such as Lismore and Ballina.

His modelling has identified at least 700,000 homes across Australia vulnerable to climate risks as the world heats, a pressing issue he says will leave many areas “uninsurable”.

“The rule of thumb has always been that properties in a one-in-a-100-year flood zone with a 30-year mortgage probably won’t suffer a flood event,” Dr Mallon told The New Daily.

“But now these areas are flooding two or three times over a decade.”

It’s impossible to say how frequent and severe extreme weather events will become, but scientists say the trend is clear and the financial industry is obliged to heed their warnings.

“Lismore and Ballina are going to get a jolt in insurance premiums. A lot of people already didn’t have cover because they couldn’t afford it,” Dr Mallon said.

Higher insurance premiums are just the tip of the iceberg.

Climate Council economist Nicki Hutley said the climate crisis threatens to kick off a cascading devaluation process for many once-premium riverside properties as higher insurance costs filter through to mortgages.

“These so-called one-in-a-1000-year events, according to the latest IPCC report, are likely to become one-in-20-year events,” Ms Hutley said.

“Who wants to insure that, and how are you going to get a mortgage?

“These places are at risk of not being insurable in the not-too-distant future, and some property values could essentially fall to zero.”

Australia has already seen this play out in Far North Queensland after Cyclone Yasi in 2011, Ms Hutley said.

“We’ve seen insurance premiums for cyclone-prone areas go through the roof … some resorts in Queensland have never been able to reopen. The properties became unsellable,” she said.

Ms Hutley said the only way to avoid a downward spiral of rising insurance premiums and falling property values is a rapid expansion in government efforts to improve climate resilience.

Research Ms Hutley worked on in 2014 after the Brisbane floods found flood levees return five times their investment in mitigated damages, for example.

“Bridget McKenzie came out the other day and said the disaster resilience fund is for the future,” Ms Hutley said.

“How ludicrous is that? This disaster is now.”

Andrew Gissing, general manager of resilience at Risk Frontiers and a former SES senior manager who responded to the 2011 floods, said the best thing governments can do to improve climate resilience is invest more money in infrastructure such as flood levees.

“The key message is about mitigation. The more we invest in mitigation the more we reduce risk that reduces insurance premiums,” he said.

Mr Gissing said that after the Queensland government invested in levees after the 2011 floods, insurance premiums for houses in affected areas fell 50 per cent.

“Funding is of utmost importance,” he said.

“It’s a matter of money, and the community also has a part to play in becoming as resilient as possible.”