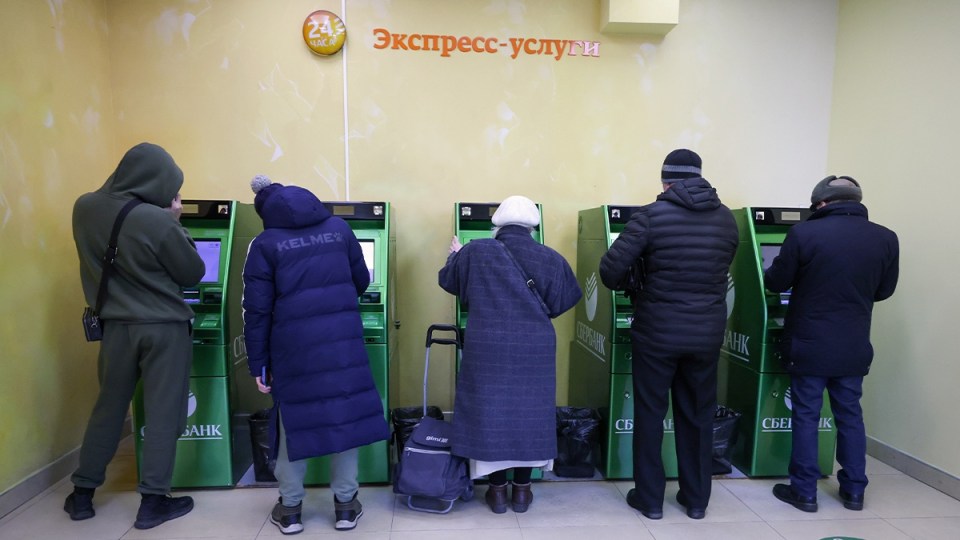 Russians are lining up to withdraw their savings as the Ruble plunges in response to western sanctions. Photo: Getty

The global economy has been hit by the largest disruption since COVID-19 as Russia scrambles to contain the fallout from western sanctions.

A coalition of nations led by the US and Europe have frozen Kremlin-linked assets, banned transactions with many Russian companies, and excluded Russian banks from key parts of the western financial system in the past week after Moscow ordered a full-scale invasion of Ukraine.

But while economic sanctions are the main reprisal western nations are imposing on Russia, experts said their impact is still uncertain, casting doubt on whether the Kremlin will back down.

The sanction regime has been weakened by an exclusion of Russian energy exports, while the Kremlin has talked up efforts to pivot Russia’s economy away from the US and Europe since invading Crimea in 2014.

Despite this, clear evidence has emerged that the sanctions are already having a serious effect on Russia’s domestic economy, with workers queuing at banks to withdraw savings as the Russian Ruble crashes.

Meanwhile, Russia’s central bank warned on Tuesday that economic conditions have “altered dramatically” over the past week, with official interest rates hiked to 20 per cent, the highest level since 2014, to shield households from inflation fears sparked by their rapidly devaluing local currency.

The White House says the sanctions are designed to “make sure that the Russian economy goes backwards as long as President Putin decides to go forward with his invasion”.

On that narrow measure, there’s plenty of evidence they’re succeeding.

The Russian Ruble has plunged more than 20 per cent against the US Dollar and Euro over the past week as sanctions block Russian banks from the international financial system, lock its companies out of western markets and freeze Kremlin-linked assets.

The US Treasury claimed 80 per cent of Russia’s banks are affected.

Crucially, foreign reserves held by Russia’s central bank have also been frozen in the US and Europe, limiting (though not totally) its ability to prevent the Ruble from nosediving by buying up the currency in bulk.

The US and European-led sanctions escalated further on Monday when Russia’s financial institutions were barred from participating in SWIFT – an international communication system covering more than a trillion dollars in financial transactions around the world every day.

Dr McDonagh explained the western sanctions are more aggressive than those levied after Russia’s annexation of Crimea in 2014, and are designed to send the country into a “financial tailspin”.

“This has never been done to a large economy of Russia’s status,” Dr McDonagh said.

“This is directly causing a plunge in the value of the Russian Ruble.”

The Ruble plunge has triggered a run on the currency in parts of Russia, as workers line up at banks to withdraw savings amid inflation fears.

The Bank of Russia (BOR) has eased lending restrictions on domestic banks and further restricted non residents from withdrawing capital.

And in another dramatic move, it hiked interest rates from 9 to 20 per cent in response to what BOR governor Elvira Nabiullina said was a “structural liquidity deficit” across Russia’s local banking system.

“We need to employ a wide range of tools to maintain financial stability,” she said in translated remarks.

“In order to support the attractiveness of deposits and protect housing savings against depreciation, we need to raise interest rates.”

Russian exporters have also been ordered to sell 80 per cent of their foreign currency revenues for Rubles, while Ms Nabiullina said Russia’s SWIFT alternative (called FSM) will be available to foreign companies.

Will the sanctions deter Russia from war?

It remains unclear how successful Russia’s attempt to mitigate sanctions will be over the coming months.

However, on the larger question of whether western sanctions will deter the Kremlin from war in Ukraine, Curtin University associate professor Alexey Muraviev is sceptical.

He said the sanctions will “definitely slow down” Russia’s economy, but are unlikely to stem the Kremlin’s appetite for war because it’s based on national security concerns around Ukraine’s stated desire to join NATO.

“If the aim of these sanctions is to alter Russia’s behaviour in Ukraine, they’re not going to have any effect,” Associate Professor Muraviev said.

“The Kremlin has made a major strategic decision … they will be prepared to take [economic] punishment for some time.”

There are also several factors weakening the western sanction regime.

One, Dr McDonagh said, is that Russia’s massive energy export industry has been largely carved out of European sanctions, allowing Russia to access foreign currencies through its sale of gas and oil into Europe.

Russian fuel and energy exports were valued at $US167 billion ($229 billion) in 2020, making it a vital part of the Kremlin’s economic leverage across Europe.

Despite this, multilateral support for Russian sanctions in Europe and a high level of trade between Russia and large EU nations like Germany and France have led some experts to suggest the sanctions will still work.

But Dr McDonagh said the success of sanctions is also about when their impact will be felt, arguing a “timing problem” plagues the western effort.

“Sanctions will take time to bite, while the Ukraine invasion is occurring day by day and escalating by the hour as more people die,” he said.

Russia also has a significant amount of foreign reserves to fall back on that will make it easier to weather the financial storm.

About $630 billion of foreign reserves will help the BOR to prop up the Russian Ruble in the face of a global selloff.

And much of this war chest is protected from the western sanctions.

According to BOR data from 2021, about 21 per cent of Russia’s foreign reserves are held in monetary gold within Russia, while another 13.8 per cent are held in China, which has opted not to join in on any sanctions.

About a third of Russia’s reserves were held in nations with sanctions, but it is still unclear how these figures changed between 2021 and 2022.

Dr McDonagh said the Ruble is still highly vulnerable to a sell off though because its foreign reserves in China are subject to their capital controls and can’t be easily converted to US Dollars, a higher demand currency.