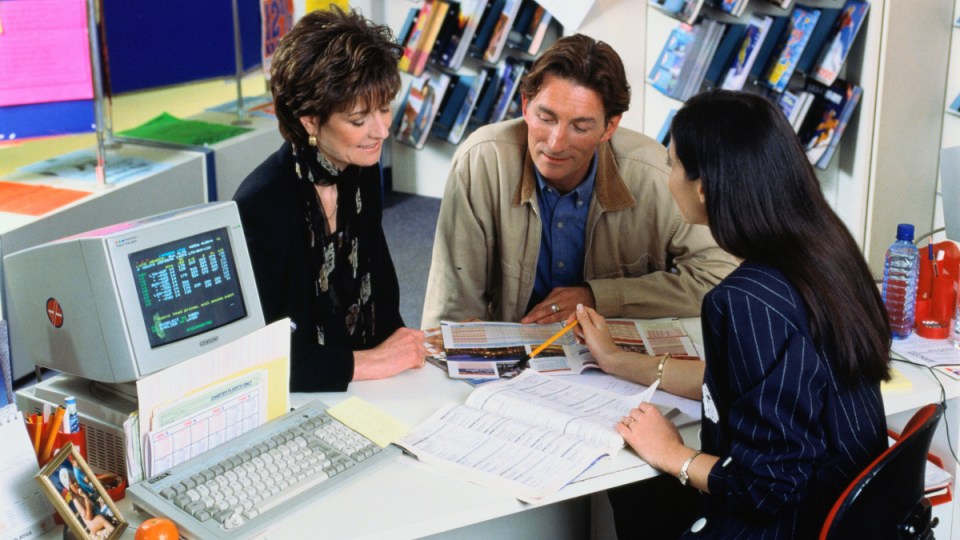 Now is the time to review your insurance with an adviser. Photo:Getty

Australians are being told to review their insurance cover after protection was dramatically cut by the regulator in October.

Reductions in income protection insurance payouts and a tightening of who’s eligible to make a claim were created by the Australian Prudential Regulatory Authority (APRA) in response to losses by major insurers, said Mark Kachor, managing director of insurance research group DEXX&R.

“Insurers have changed the definitions of incapacity and changed the time frames over which policies are paid out on,” he said.

“It makes it harder to claim in the first place and much harder to remain on claim.”

The changes apply to policies that are bought outside of superannuation funds, which are very popular with self-employed business and tradespeople.

That’s because they give higher levels of cover than are available in the basic cover offered in group insurance inside superannuation funds.

The changes are severe and hard hitting.

Previously claims could be made if the insured person “was unable to perform one important duty of their occupation”, Mr Kachor said.

The change means that claims can now only be made if “you are unable to perform all duties of your occupation”.

That means if, for example, a plumber running a plumbing business breaks a leg and cannot perform physical work but can still perform management tasks they could not claim on income protection.

Previously the plumber would have been able to claim income protection for the length of recuperation despite being able to perform tasks like management, paperwork and quoting.

In another hit to cover, APRA has cut the maximum amount of income that can be insured to 70 per cent.

Previously it was 75 per cent plus 10 per cent superannuation, which effectively made it 85 per cent. 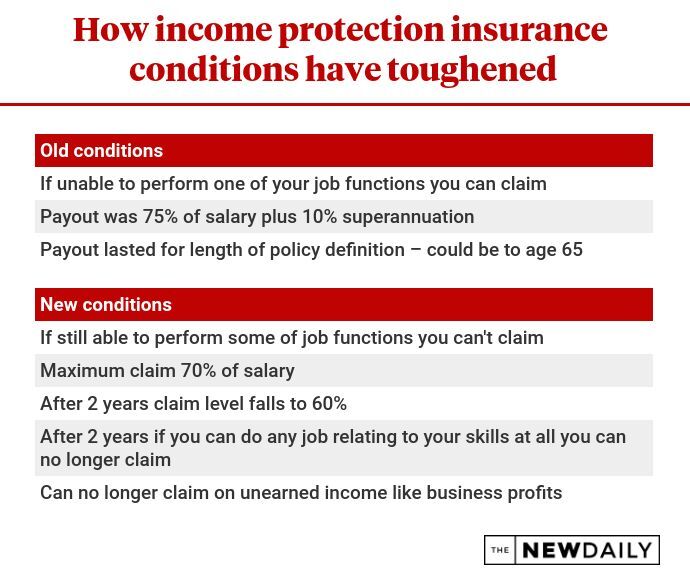 Claim times have also been cut back so that after two years the maximum claim is 60 per cent of income.

And after two years a further restriction means that a claimant can only be paid if they are unable to do all the duties of any occupation to which they are suited through education, training or experience.

Previously some income protection policies paid out until age 65 and that led to losses for some insurance policies that found themselves paying out on mental health claims that were difficult to prove, said Michael Harrison, chair of financial advisory Synchron.

Another restriction for the self-employed is that they can only claim income support on what is deemed to be personal exertion income.

That means business and trades people who receive some of their income as a profit share or dividend from their business would not be able to claim on that income if they are injured or fall ill.

Although the recent changes only apply to retail insurance policies outside superannuation, the situation in super is not that different, Mr Kachor said.

“The changes within retail make them similar to the group policies in superannuation,” he said.

That means you can’t escape by moving from retail to group cover.

In fact, some aspects of group cover make it even less attractive.

“Group cover lasts typically for a three-year period and the insurer can terminate the policy or change the benefits in that time,” Mr Kachor said.

All that means it is time to review your insurance situation to ensure that you have the best cover available to fit your needs, said Antoinette Mullins, principal of Steps Financial.

That involves understanding your level of cover, its cost and what your insurance needs are as these will change through life.

“A plan B is very important and the value of advice comes in to help you really understand the policies you have,” Ms Mullins said.

“You need to determine whether the cover you have remains appropriate for you.”

Given the changes it is important to “discover whether there are options that are more affordable or more cost effective for you”, Ms Mullins said.

Don’t be spooked into changing your policy too easily though because there are advantages to holding on to your old policy.

A new policy taken out now will have the stringent APRA measures applied to it.

“You might not need to change. If the current policy meets your needs and is cost effective then there’s no need to jump to a new policy,” Ms Mullins said.

But remember that insurers aren’t going to let you live in the old world altogether and over time they will push up premiums.

So if you do stay with what you’ve got, make sure you keep an eye on the costs and market overall.

“I tell my clients to review their cover every three to five years anyway,” Ms Mullins said.

October’s changes have really rocked the market and one of the results has been that some insurers have been finding ways to offer better deals than those defined by the changes.

AIA Group, a large US insurer, just released a new income protection policy that allows clients to insure their own occupation for up to five years, Mr Kachor said.

Companies that do not keep to the letter of the regulations released in October will be required by APRA to contribute more capital to their business.

That may mean that only very large global operators like AIA can afford to be very competitive in the space.