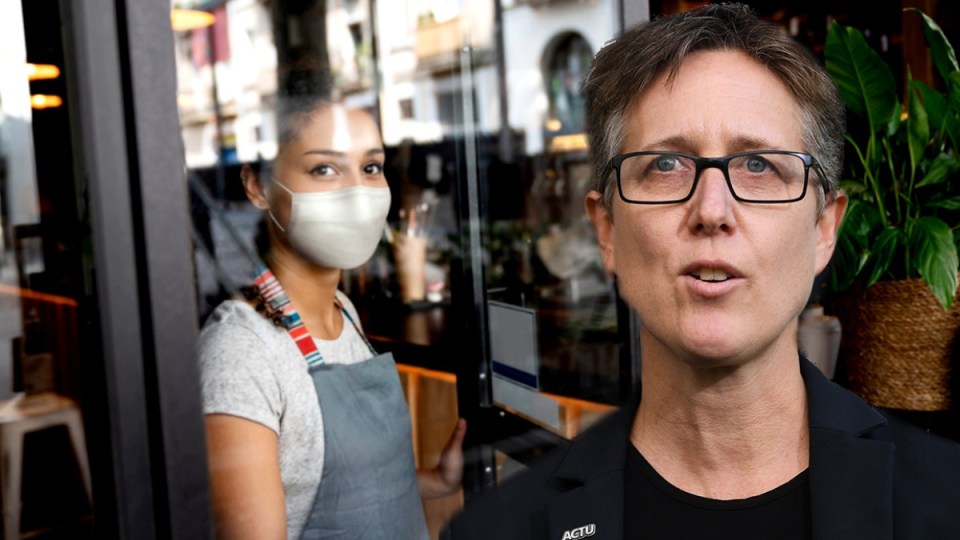 They have called on employers to improve ventilation at workplaces and invest in higher-quality masks for staff, saying “union members will take whatever steps are necessary in their workplaces to ensure they are as safe as possible”.

Weeks of growing union anger about the Omicron staffing crisis came to a head on Monday, with an emergency meeting of more than 30 unions in Melbourne resolving to issue a list of workplace demands and threats of industrial action.

ACTU secretary Sally McManus said unions “will not accept” sick people being asked to work as Australia recorded 73,818 COVID cases on Monday – among the worst outbreaks in the world on a per-capita basis.

“It’s clear Omicron requires a different response to the response we had in 2021,” ACTU secretary Sally McManus told reporters on Monday.

“That response needs to be a much bigger tightening of health and safety provisions in workplaces.”

Unions will now write to every employer across the country asking them to conduct new risk assessments about Omicron’s effect on workplace health.

They have threatened to go on strike if businesses don’t do enough to ensure worker safety.

Ms McManus said the top priorities for unions were improved ventilation, higher-quality masks such as the C2 or N95 varieties, and plans to require businesses to buy RATs for workers “once supply is resolved”.

Unions also want businesses to delay any mandates requiring workers to return to the office.

“If an employer is not going to put in place new controls for Omicron and keep [workplace safety] as it was … that would obviously create a circumstance where it would be reasonable for employees to say they’re not prepared to work in those circumstances,” Ms McManus said.

Ms McManus said unions will begin pressuring employers to start buying RATs when remote working is not possible in a few weeks, aligning with an expected influx of supplies earlier touted by the federal government.

“[But] our demand is bigger than [workplaces] – tests should be free and accessible to everyone,” Ms McManus said.

The moves come after weeks of union backlash over the government’s handling of the Omicron wave, which they say has led to severe testing shortages and a spate of food shortages due to lots of isolating workers.

Wesfarmers, owner of Kmart and Target, on Monday became the latest  retailer to warn about stock shortages and reduced trading hours amid the Omicron staffing crisis, following Woolworths last week.

Meanwhile, consumers continue to report bare supermarket shelves on social media, with warnings the shortages will continue into February.

National cabinet agreed to ease COVID isolation rules for workers in a range of essential sectors last week in a bid to address mounting anger.

But its plan to allow close contacts to return to work if they test negative has been called unsafe by unions and unrealistic by firms, because it relies on access to millions of RATs when supply is currently unreliable.

“Unions will not accept people going to work sick or infectious. This is completely unacceptable,” Ms McManus said.

Up to half of workers hit by Omicron

Unions are seeking new guarantees from bosses as new modelling shows millions of workers will be affected by the growing Omicron wave.

Treasury told the Morrison government last week that up to 10 per cent of the workforce could be affected by COVID isolation rules, but new modelling published by Deloitte Access Economics (DAE) on Sunday suggested this might be a major underestimate.

DAE said up to half the Australian workforce, or about 6.5 million workers, could miss a week of work due to Omicron in the first half of 2021.

“COVID is running riot in ways that are playing merry hell with a bunch of ‘high touch’ industries, including trucking and distribution, as well as supermarkets and retail more widely.

“That pain is probably temporary, but it is huge.”

DAE expects the economic impact of the Omicron wave to be smaller than Delta’s, however.

This is partly because state officials are no longer resorting to widespread lockdowns to minimise the spread of the virus.

DAE’s projections support the prospect of a strong economic recovery in 2022 – an observation seized on by Treasurer Josh Frydenberg on Monday despite other economists saying his most recent economic forecasts have been shredded by Omicron.

“No one is understating the challenges that we face here in Australia from the Omicron variant – both health and economic,” Mr Frydenberg told reporters in Melbourne.

“But there is good reason to be optimistic and confident about our future and the fundamentals of our economy remain strong.”