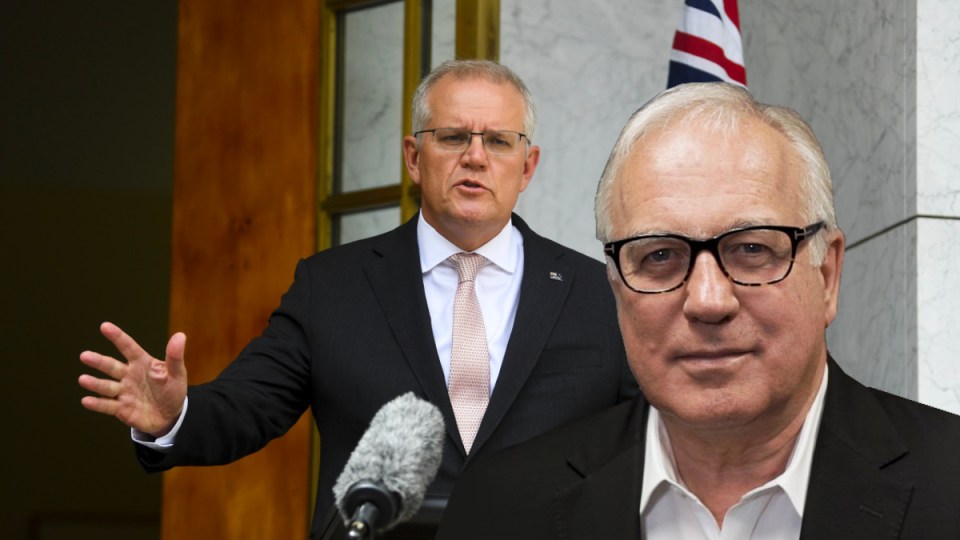 It was a reasonable spin to put on the Prime Minister’s announcement that opening the borders to skilled migrants and foreign students would go ahead, followed up by his “victory lap” speech to the Sydney Institute that night.

“In a truly global pandemic, Australia’s response has been a positive standout,” declared Scott Morrison, listing the ways in which the pandemic was now in the rear-view mirror while his government’s sights “are firmly through that windscreen on the road ahead”.

But oh boy, that speech and the AFR’s headline have not aged well.

In the days following, the Morrison government and most of the states removed most pandemic restrictions for Christmas, to everyone’s relief but against the advice of epidemiologists.

It was probably against the advice of their chief medical officers, as well, although only the inevitable royal commission will tell us that, when they’re questioned under oath, one by one.

There seems to have been no planning of any sort for the increase in COVID-19 cases that was always going to result from Omicron.

The result has been a shambles: Tests unavailable, businesses closing, supermarket shelves empty, hospitals and emergency services overwhelmed, the economy taking another swan dive, and the unvaccinated Novak Djokovic getting a visa, later withdrawn.

Watching from the sidelines of annual leave, it has been shout-at-the-TV exasperating, no holiday at all really, but the question that keeps coming back to me is: Why is it that governments, especially conservative ones, don’t do risk management?

Other organisations do it. In fact, half of most board meetings are spent discussing the risk of decisions going wrong and the things they need to do to prepare for a worse-case scenario, all while telling the market, of course, that the decision is perfect and everything is going to be just hunky dory.

Not conservative politicians. They reassure and then believe their own reassuring bullsh-t, and/or their neoliberal ideology, which tells them that governments are always the problem, not the solution.

The experts were warning before Christmas that things might go south with Omicron, and although it looked less deadly than Delta, the exponential increase in cases would result in similar or higher numbers of hospitalisations and deaths.

In fact, the exact future of Omicron was being modelled by epidemiologists so there was no need to guess.

So why on earth would the nation’s political leaders not hedge both their commentary and their actions with some recognition of the risks?

And why would they not realise that applying the same isolation policies for close contacts when there are a lot more cases would result in a collapse in the availability of staff?

Why has there been no national public space ventilation policy, as all infectious disease experts have been calling for?

Instead, they rolled the dice, while failing to put in place any contingencies for staff shortages or making sure there would be enough tests.

And what risk management planning is being done for the next variant? Omicron is definitely not the last.

Much the same dice-rolling has been going on with climate change.

In 2007, Kevin Rudd famously called it the great moral challenge of our time, which it was, and is, but global warming is primarily a risk management challenge and successive conservative governments have conspicuously failed in that.

The risk of catastrophe from global warming is not zero so why would anyone in a position of responsibility assume that it was?

It’s not just Australia; many politically conservative leaders around the world have been prepared to assume the risk of climate disaster is zero and act accordingly, although the Australian Coalition does seem to have attained world leadership in insouciance, both with climate change and Omicron.

What is it with conservatives that they don’t bother with risk management?

Edmund Burke, generally regarded as the founder of modern conservatism and quoted by Scott Morrison in his Sydney Institute speech alongside John Howard, said (among many other things): “Nobody made a greater mistake than he who did nothing because he could do only a little.”

So it doesn’t seem to be Burke’s fault. He was a practical man, who also said you can never plan the future from the past, which implies a recognition of the need for risk management.

Maybe it’s just a hangover from the absolute certainties of Margaret Thatcher and Ronald Reagan. Thatcher used to say there was absolutely no alternative to deregulation, privatisation and the free movement of goods and capital.

Reagan, of course, declared at his inauguration as head of government that government is not the solution, but the problem.

The PM must step up

In his book about the pandemic, called Shutdown, economist Adam Tooze says that dealing with the macro risks of COVID requires a willingness to contend with political choices about resource allocation and priorities.

“That runs up against the prevalent desire of the past 40 years to avoid precisely that, to depoliticise, or use markets or the law to avoid such decisions.

“This is the basic thrust behind what is known as neoliberalism, or the market revolution – to depoliticise distributional issues, including the very unequal consequences of societal risks, whether these be due to structural change in the global division of labour, environmental damage or disease.”

He goes on to point out that the coronavirus has exposed our “institutional lack of preparation” and the “weakness of basic apparatuses of state administration”.

A lot of Scott Morrison’s recent rhetoric about the pandemic has been flavoured with neoliberalism, as in: “The reach of government in this pandemic is not some new norm, and it will not be under our government” and “now (is the) time for governments to … step back”.

Not so fast, Prime Minister. You need to step up, not step back – you’ve got a job to do.

Alan Kohler: Neoliberalism is at the heart of the Omicron shambles