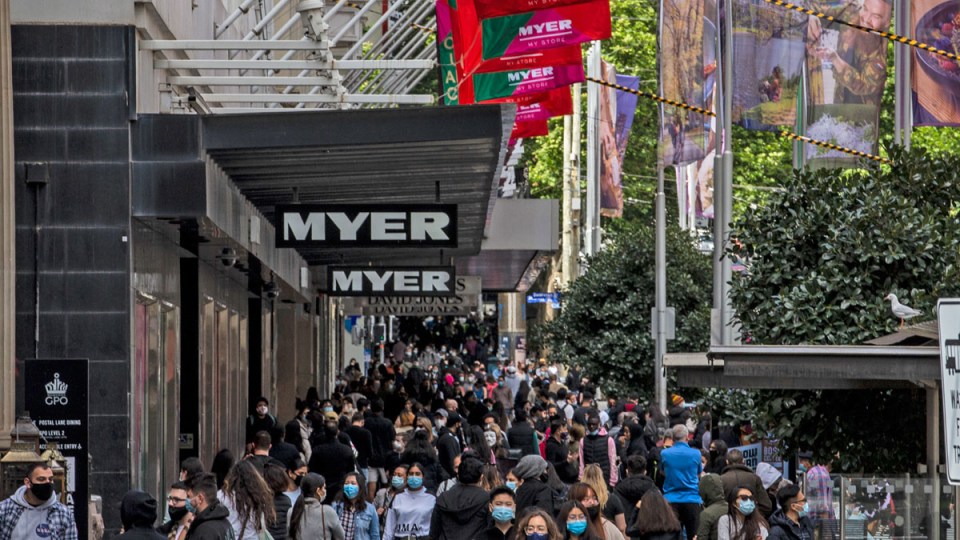 Two in five Australians this year are expected to do their Christmas shopping in November. Photo: AAP

Shoppers are expected to spend big in November as fears over delivery delays and huge online discounts push them to bring forward their Christmas shopping.

Australia Post said on Tuesday that up to 40 per cent of Australians are planning to buy their Christmas presents online this month, as retailers brace for a $5.4 billion Black Friday and Cyber Monday shopping rush.

Local shopping event Click Frenzy will kick off the November festivities on Tuesday night, with everything from clothing and footwear to toys and entertainment products predicted to fly off the digital shelves.

Retailers like Target, Big W, Rebel Sport and Telstra are all taking part, offering discounts on popular lines of between 25 and 50 per cent.

Australia Post executive Gary Starr said the taxpayer-owned postie will be delivering through the weekend to keep up with the demand.

“Click Frenzy is the start of the pre-Christmas sale period and we’ve been working hard to ready our network,” Mr Starr said on Tuesday.

“We’ve got over 45 new and repurposed operational and retail sites up and running, additional planes in the air, over 4000 new team members coming on board.”

Christmas: November is the new December

After the huge surge in ecommerce during the pandemic, November sales are expected to be fuelled by cashed-up shoppers enjoying new freedoms and warnings about shipping delays before Christmas.

The growing popularity of Black Friday and Cyber Monday sales events in late November will play a big role, with $5.4 billion expected to be splurged in four days, the Australian Retailers Association (ARA) said.

To put that into perspective, the ARA predicts pre-Christmas sales will average about $1 billion per day in the lead up to December 25.

“For the past two years, November has beaten December as the biggest month for Australian retail sales,” ARA chief executive Paul Zahra said.

“Black Friday and Cyber Monday can be credited with this trend as people snap up some bargains and shop early for Christmas.”

The Black Friday and Cyber Monday shopping events started in the US but have become established in Australia over the past five years.

And the sales this year will be even bigger than previous years, because economists are tracking a surge in spending after coronavirus lockdowns in New South Wales and Victoria.

Australian saved more than $204 billion during the pandemic as they stopped going out to bars and restaurants and delayed buying clothing and accessories.

The November sales holidays will be the first chance that bargain hunters have had to catch up on lost shopping time, with Commonwealth Bank data showing retail spending intentions shot up 9.1 per cent in October.

But Deloitte’s leader for retail and distribution, David White, said retailers might be less aggressive with their discounting due to higher cost pressures in their supply chains during the pandemic.

A Deloitte survey of local retailers published on Tuesday found 72 per cent are facing higher costs amid skyrocketing shipping prices.

“Retailers are going to try to stay on margin,” Mr White told TND.

“They’ve got to cover all the costs of COVID-safe environments and extra delivery costs.”

Shoppers will also get in early to avoid missing out on Christmas presents due to global shipping delays.

Everyone from the ARA to Australia Post and the Australian Competition and Consumer Commission is warning shoppers to buy presents early to avoid disappointment on Christmas Day.

Deloitte’s survey found 55 per cent of retailers are worried they won’t have sufficient stock for Christmas.

Mr White said popular products are likely to sell out earlier than usual.

“The big manufacturers are prioritising other markets,” Mr White said.

“Europe and North America in particular are getting the lion’s share of the best stuff, so there will be limited numbers [of products].”

Making matters worse, Australia Post has also been directly affected by strikes and has struggled to keep up with the rise in online shopping during the pandemic.

The post office has just fast-tracked $400 million in investment to raise its parcel capacity by 30 per cent before Christmas.