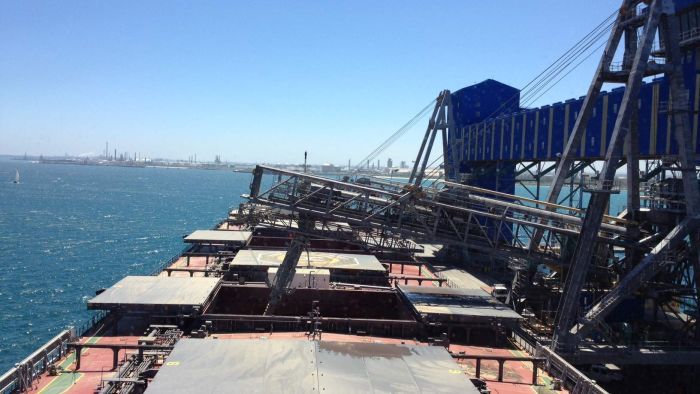 Pick up a newspaper anywhere in the world this week and you’re guaranteed to find a headline warning about COVID supply chain chaos.

Consumers the world over are being told to do their Christmas shopping early to avoid missing out as businesses warn of major delays to delivery times.

Earlier this week, the Chinese government warned consumers to stock up on essentials due in part to COVID restrictions.

And in Southern California, where container ships arrive in the United States from China, mountains of goods are sitting undelivered at ports.

Bloomberg has dubbed the worldwide trend ‘The Big Crunch of 2021’.

And it all boils down to a massive change in spending patterns during lockdowns, as we stopped going to bars and restaurants and instead spent big on goods like furniture and electronics.

Further aggravating the crisis is a shortage of computer chips and timber, together with an unfolding energy crisis in Europe and Asia.

But local retailers such as Myer and Big W are reassuring shoppers that they are well stocked for the Christmas period.

Australia’s consumer watchdog sounded the alarm locally on Thursday, warning shoppers to get in quick with their Christmas shopping as “extreme congestion” in global supply chains would delay the delivery of overseas goods.

The ACCC said freight costs had soared about 700 per cent over the past year but noted this could not guarantee the timely delivery of our Christmas presents.

“Pre-pandemic, the sector would have likely been able to manage such a surge in containerised demand,” ACCC chair Rod Sims said.

“But the simultaneous destabilisation of almost every part of the supply chain has left them without any spare capacity and struggling to cope.” This is one of those global problems with local symptoms.

Australia Post has already been forced to temporarily suspend parcel deliveries in Victoria and New South Wales this year and is now preparing for a record Christmas.

The national postie is investing millions of dollars to increase its delivery capacity by 30 per cent in time for December 25, but retailers are still warning shoppers to expect shortages and higher prices.

The ACCC said on Thursday that some big retailers are now so worried their cargo won’t arrive before Christmas that they’ve taken to buying shipping containers and chartering sea vessels.

“But a surge in demand and COVID-19 outbreaks that have forced numerous port operations to temporarily shut down have caused congestion and delays with a cascading effect across the globe.”

Other retailers are playing down the problems.

And Dan Murphy’s has reassured customers it won’t be affected by a booze shortage over the Christmas period.

But sky-high computer chip prices are already causing shortages of electronics for all retailers, sending prices much higher since COVID.

And items as far flung as bicycles are also experiencing shortages.

It all means that shopping early and being willing to settle for the second or third item on your wish list will be important.

Labor victory fires up Tamil family’s hopes of return to their Biloela home
ACTU hails Labor’s triumph as the first step to pay raises
Analyst: Sharemarket will be anxious about a Labor pact with Greens
French foreign minister hails defeat of Morrison and his ‘notorious incompetence’
Tiger Woods quits PGA tournament after the worst round of his career
COVID claims 18 more lives as nationwide daily cases soar above 35,000
Amazon accused of ‘flagrantly lying’ to Senate inquiry in fiery exchange
Today's Stories

‘The Big Crunch of 2021’: Why shoppers everywhere face major delays