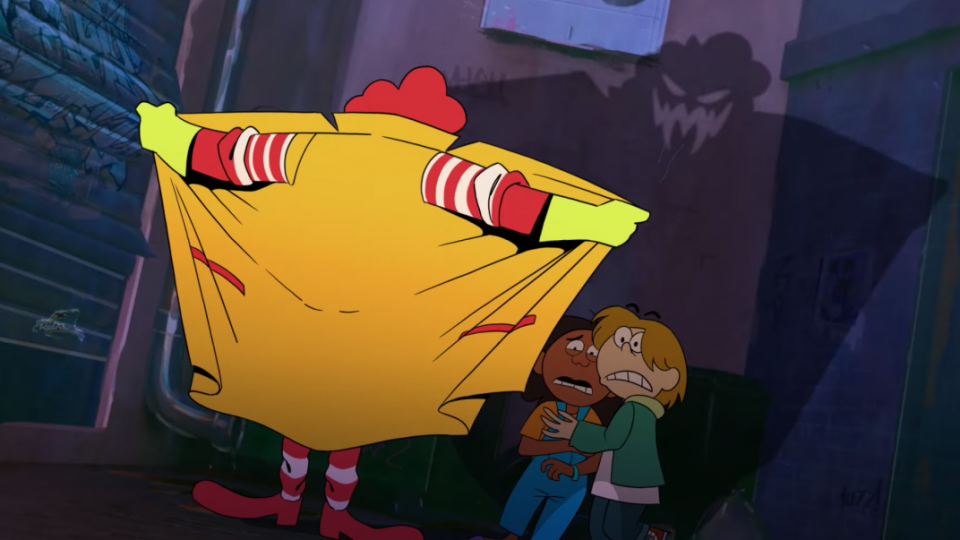 Grill'd has landed itself in hot water with the ad standards board over an "extremely inappropriate" ad. Photo: YouTube

Burger chain Grill’d has changed an “extremely inappropriate” ad after it was accused of being “suggestive of sexual violence” against children.

The restaurant published two animations in September that depicted a Ronald McDonald look-a-like appearing to expose himself to two kids in an alleyway, before revealing a trench coat filled with plastic toys.

A personified Grill’d burger then appears and attacks the figure, who is later shown half naked with a Grill’d toothpick flag covering his genitals.

It was an attempt to poke fun at fast food giants making pollution worse by handing out plastic freebies, but the company is now in hot water with Ad Standards which found Grill’d broke the advertising industry’s code of conduct.

In a ruling published on Wednesday, Ad Standards said the animation was an “extremely inappropriate” way to promote burgers.

It said the ad was “menacing and suggestive of sexualised violence”.

“The Panel determined that the advertisement didn’t treat sex, sexuality and nudity with sensitivity to the relevant audience,” the Ad Standards community panel said.

Some of the public complaints about the animation, which led Ad Standards examining the videos, branded the ads as “disgusting”.

“The advertisement is displayed during a normal documentary show Mysteries of the Missing which is educational and appeals to curious children,” one complaint said.

“Displaying an advertisement that makes fun of a Ronald McDonald type person in a trench coat creeping up to two children who are alone in an alley is extremely inappropriate for children to view.”

The sections of the code prohibit ads that present or portray violence unless it is justifiable in the context of a product and require companies to treat sex and nudity with sensitivity to children.

“The suggestion of sexual violence at the start of the advertisement was extremely inappropriate in an advertisement for burgers,” Ad Standards said.

“Further, the Panel noted the additional scenes of cartoon violence, while relevant to the narrative of the advertisement, were not related to the burger products being promoted.”

Ad Standards does not issue fines or make binding rulings.

But Grill’d has now promised to change the ad to address the concerns.

In its submission to the Ad Standards complaint, Grill’d originally said it did not believe the marketing campaign breached advertising standards.

“The cartoon nature of the violence is consistent with animated superhero programs and is justifiable in the context of the product being advertised in this fashion,” Grill’d said in response to the complaint.

“We note that the superhero persona of the burger is consistent with the messaging of the advertisement, being a ‘righteous’ figure who combats against perceived ‘evils’ in the industry (in this case, offering plastic toys to children as an enticement to purchase fast food products).”

Grill’d was investigated by the Fair Work Ombudsman (FWO) in 2019 over allegations its workers were underpaid.

Grill’d was contacted for comment but did not respond before deadline.