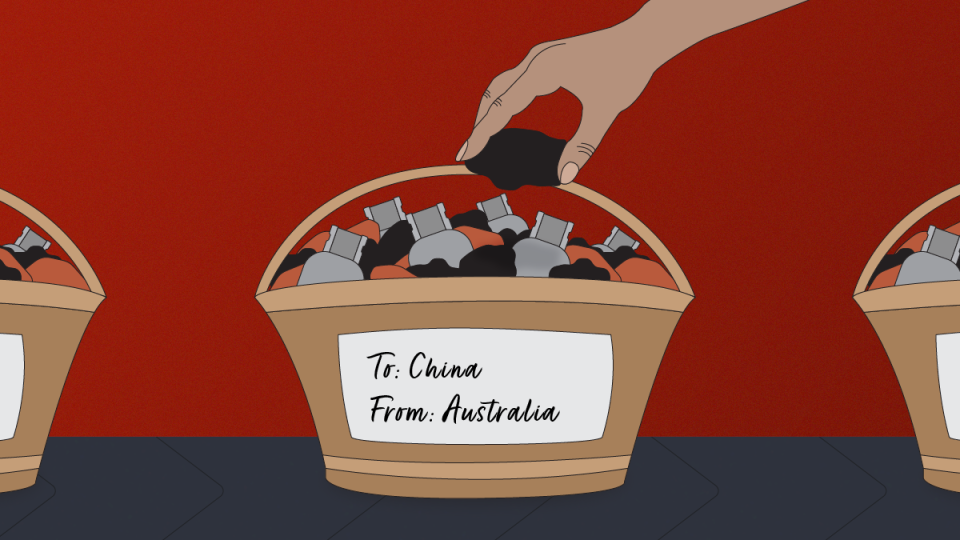 Australia has put too many eggs in the China basket. Photo: TND

Australia has missed an opportunity to use the China minerals boom to invest in businesses beyond the mining sector and increase exports to other nations, according to a new report.

Proceeds from the trade bonanza with China could have been used to build a high-wages manufacturing sector and invested into Australia’s schools and universities.

Researchers from the University of Technology Sydney said that is what would have happened in advanced economies such as the United States, Japan and much of Europe.

But James Laurenceson, report author and director of the Australia-China Relations Institute, said Australia had instead adopted a “completely hands-off approach to an extreme degree” with Australia’s trade with China.

“That’s very different to the way countries like the United States, Japan and much of Europe behave these days. They see smart industry policy, not protectionism, as having a role to play in building resilience,” Dr Laurenceson said.

“Some of the proceeds could have been plowed back into education and building out a smart manufacturing sector.”

Australia’s relationship with China has come to distort the trade picture in a couple of ways.

Firstly, China takes so many of our exports that we are highly dependent on its moods and economic performance.

But that hasn’t been as much of a problem as you might expect.

Jo Masters, chief economist at EY Oceania, said Australian businesses have managed to diversify into other markets since China slapped big restrictions on a wide variety of industries, including coal and wine.

“If you look over the last couple of years we’ve seen goods like coal and wine that the Chinese have put tariffs on, but we have been able to divert volume to other markets,” Ms Masters said.

And coal shortages in China, partly resulting from the ban on Australian exports, have seen the price rise, delivering higher values from other markets.

Although China sucks in massive amounts of Australian resources, many of those are used to manufacture products that are then on-sold into the global market.

When that calculation is taken into account it means “China’s share of the Australian total is lowered by around five percentage points”, the UTS report found.

The Chinese market is constantly changing, meaning it is becoming a bigger target for Australian exports.

“There is a big growth in the middle class, which is rising in number and income,” Dr Masters said.

The extremely high exposure to China in recent times is “only a recent phenomenon”, Dr Laurenceson said.

“[Countries similar to Australia] have their largest market accounting for between 25 and 30 per cent of exports and that’s precisely where China was until the recent big run up in iron ore prices.

“Iron ore peaked at $230 a tonne and no one expected it to remain there. We’re already seeing it fall back.” 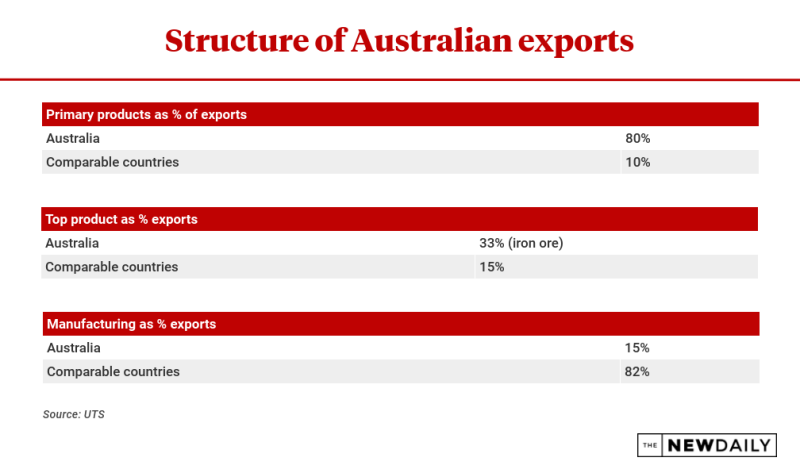 As prices normalise, China will move back towards the average of 25 to 30 per cent of exports, Dr Laurenceson said.

That price fall will also reduce Australia’s reliance on one product in its exports which, as the above chart shows, is 33 per cent on iron ore.

Similar countries rely on an average of 15 per cent of export income from one product.

Where Australia really differs in its exports is the mix of goods sold offshore.

“We have 80 per cent of our exports made up of primary production [agriculture and mining]  and for similar countries the average is 15 per cent,” Dr Laurenceson said.

“We really look like an outlier here and that has consequences in resilience.”

If primary industry prices fall through new competitors, like African countries being backed by China to enter the market, prices could fall and markets could be lost.

“The problem with our export mix is that it’s much more carbon intensive than the economy as a whole,” said Climate Council economics spokesperson Nicki Hutley.

“The European Union is talking about carbon border adjustment mechanisms [taxing the carbon levels in exports] and others will do the same.”

As the international community adopts measures against climate change Australia’s economy will suffer.

That diversification could see the development of export industries in green products like hydrogen, renewable energy and the metals used in its creation.

Research from Net Zero Emissions show such products could provide a new base for the export economy.

“It suggests those exports could triple the size of current fossil fuel exports by 2050 and the International Energy Agency talked of the critical minerals market [supplying the green economy] being the same size as the fossil fuels market by 2040,” Ms Hutley said.

Encouraging investment into high-value manufacturing products would also provide a new base for Australia.

“We have a trade deficit in elaborately transformed manufactured goods of 9.5 per cent of GDP while the average for similar countries is a surplus of 2.5 per cent of GDP,” Dr Laurenceson said.