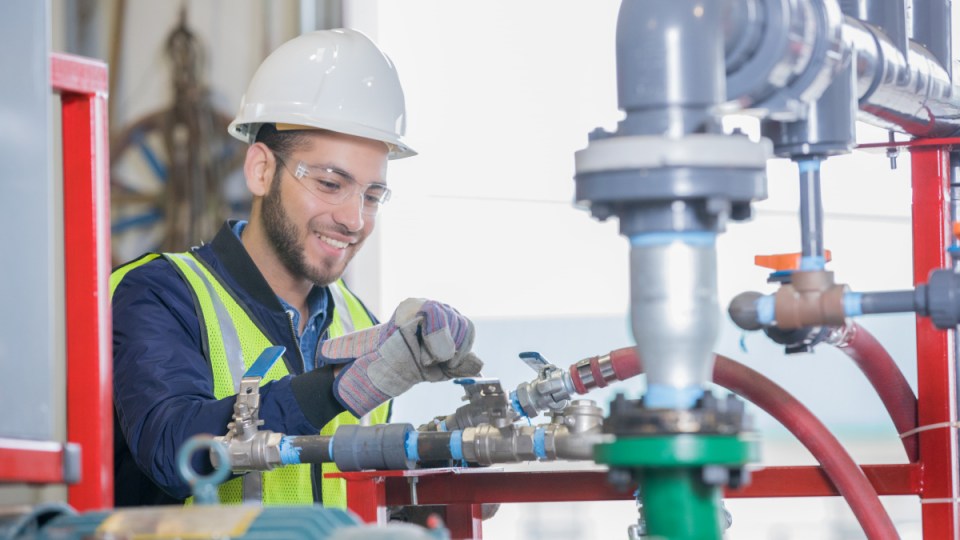 Australians have dodged the bullet of skyrocketing gas prices currently hitting consumers in Europe and Asia.

While prices in the major gas hubs of those regions have spiralled up by a factor of five, in Australia a brief spike eased in September.

That means local consumers won’t be facing big jumps in household bills into next year.

Australian gas prices jumped in June and July after outages at coal-fired power plants in Victoria and Queensland boosted demand for gas generation.

That spike was short lived due to warm weather in some states and lockdowns in Victoria and NSW eroding demand, according to research by EnergyQuest.

“You’ve had warmer weather though the major capitals, the effects of the lockdowns and increased renewables, which reduced the demand for gas generation,” EnergyQuest CEO Graeme Bethune said.

Those factors have also fed into power prices, with electricity costs falling in September in comparison with a year earlier.

What is interesting about the table above is that not only did average power prices drop, but the peak price charged by generators when power is in short supply also dropped.

That was despite the ongoing problems at the Victorian and Queensland power generators.

Part of the explanation is that there is increased output from renewables as rooftop solar grew, and new wind and solar generation came online.

That meant that gas power was called on less often to meet peak demand, which in turn held down power prices.

The inverse was true in Europe, where a 20 per cent fall in wind output over recent months helped run down gas supplies, contributing to the price spike, Mr Bethune said.

The future of power prices in part will depend on renewable output.

“If the wind blows strongly and there is plenty of sunshine across eastern Australia then it will keep pressure off gas prices,” Mr Bethune said.

The influence of renewables across the system in the last year is evident in this chart on power supplies. 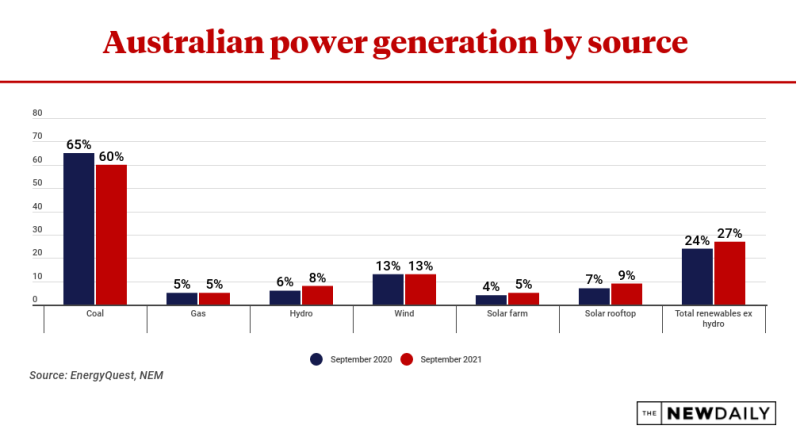 Although wind has been stable in terms of its contribution to the power equation, outputs from hydro, solar farms and rooftop solar have risen.

The result is that coal has been pushed down from 65 per cent of power production to a record low of 60 per cent and that should help hold down both gas and electricity costs.

Even if offshore gas prices continue to spike Australian gas producers would not be in a position to push up local prices to match it.

“A lot of the export contracts for LNG [liquified natural gas] out of Queensland are set against the oil price and that has not risen by anywhere near the amount gas had,” Mr Bethune said.

“Then you have the federal government which has made clear to LNG exporters that they need to make enough gas available to the local market.

“They’re doing that regardless of the fact that they could make more money in the export market.”

Domestic users are supplied from long term contracts that cannot be easily changed when gas prices rise, so that would be another brake on prices.

However, while it is comforting to know local gas prices won’t spike to offshore levels, Australian consumers are still not getting as good a deal on prices as they should be, according to Bruce Mountain, Director of Victoria Energy Policy Centre at Victoria University.

“For small customers the gas price is not the big deal. The biggest things are the operation of the retail market and the costs levied by the owners of the gas-distribution pipes,” Professor Mountain said.

“Gas supply has been very profitable for the big gas companies.”

That was in part because consumers don’t bargain-hunt for retailers, and the charges levied to use the pipes and wires of the energy distributors are too high.

Regulators set these charges and could crack down on them but don’t, Professor Mountain said.

Since privatisation margins earned in energy distribution have increased dramatically.

When power was distributed by [the state-owned] SECV there was a margin of 3 per cent on sales, Professor Mountain said.

Household power bills could be 15 per cent cheaper if the distribution businesses were less profitable, he said, with the situation similar for the gas sector.

But the move away from gas as a household fuel, necessary to reduce greenhouse emissions, will help deliver cheaper energy.

“Devices that use gas [for household tasks] are much less efficient that those using electricity,” Professor Mountain said.