As the Morrison government continues to resist introducing a carbon price to reduce emissions, new research suggests Australian workers will soon be paying for one anyway through key exports like coal, iron and gas.

The Climate Council and Victoria University published a report on Tuesday forecasting 70,000 job losses in New South Wales and Queensland if big trading partners like the US, Japan, China and South Korea impose border tariffs on countries without carbon prices like Australia.

In a worst-case scenario, Australia could lose $4.5 billion in GDP every year.

Europe has already unveiled plans to create a so-called “carbon border adjustment mechanism” (CBAM), which Climate Council chief economist Nicki Hutley said will be the first of similar schemes in America and Asia.

“Other nations are saying, ‘if you don’t have a carbon price, we’ll impose one on your goods when they get to our country’,” Ms Hutley told TND.

“We’re going to see exports of targeted goods decline across the board.” 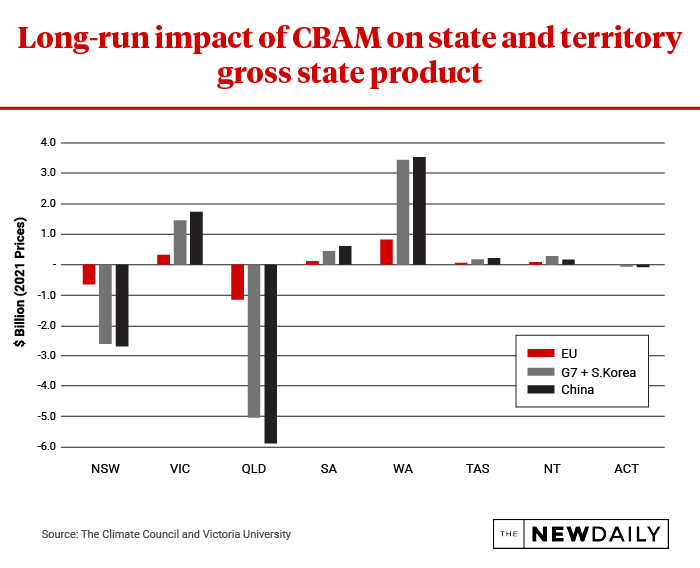 The research comes as Prime Minister Scott Morrison refuses to say if he will attend the Glasgow climate summit later this month amid talks with the Nationals, who are holding back their support for net-zero emissions by 2050.

The government has dismissed carbon border taxes as “protectionism”.

Mr Morrison advocates for a “technology, not taxes” approach to climate action, but new data shows he may be out of step with public opinion.

An annual survey of 2600 Australians published on Wednesday by The Australia Institute found 69 per cent think the government should set stronger targets and take more local action to deal with climate change.

“The majority of Australians want the federal government to move now on decisive climate action, rather than wait for other countries to act,” The Australia Institute’s climate and energy director Richie Merzian said.

The reality is that Australia may not have a choice about whether it pays a carbon price on key exports, Ms Hutley said.

The European Union is preparing to implement a CBAM policy by 2026, while China, the US, South Korea and Japan are also considering doing it.

Separate research has found as many as 43 Australian industries are exposed to carbon border tariffs, covering about $40 billion in exports.

A CBAM or carbon border tariff is essentially an import charge on the carbon produced by a particular export good like coal, aluminium or gas.

Under the European proposal, countries without carbon prices will have to pay the tariffs on imported goods to ensure all emissions are covered.

Ms Hutley estimates that if G7 nations, South Korea and China create a CBAM policy then Australia could lose $4.5 billion from annual GDP. 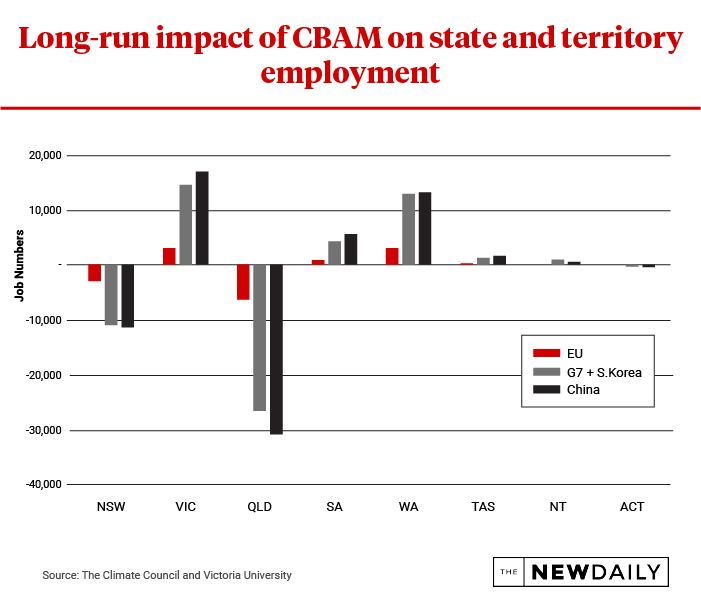 Queensland and New South Wales would be heavily affected as exports to key markets would fall in response to the tariffs, with an estimated 20,000 jobs at risk in NSW and 50,000 exposed in Queensland, the report concluded.

Ms Hutley said other nations could implement CBAMs within five years in a bid to meet ambitious emissions reduction targets after Glasgow.

“We’re going to see exports fall in all the industries hit,” she said.

“The economy will adjust over time into non-carbon-intensive industries, but what’s left behind in the wake of that is really big impacts.”

More than 64 jurisdictions around the world now have their own carbon pricing schemes, with China becoming the largest carbon market in the world following the launch of its policy earlier this year.

Nations with such schemes are encouraged to create border tariffs to ensure products they import do not escape their carbon pricing regimes.

Energy Minister Angus Taylor dismissed the prospect of carbon taxes in a speech to the Centre for Economic Development Australia (CEDA) on Tuesday, likening carbon border tariffs to a “back door” carbon price.

“We like carrots, not sticks, because the sticks have to be paid for by middle Australia,” he said.

In response to a question from the audience, the minister added: “If you create an artificial market then you’re a central planner.

“You’re raising costs, and that’s what we don’t want to do.”

Mr Taylor said the Australian public had made it clear at the ballot box they did not want to see higher power prices from climate action.

But The Australia Institute’s annual climate survey on Wednesday found that more Australians believe higher power prices over the past decade are the result of government policy uncertainty than of action on climate change.

Most Australians blame privatisation for higher electricity prices, while just 28 per cent believe higher prices are driven by renewable energy.

About 24 per cent said prices are higher because coal power is closing and we have “no clear plan” to replace it, while 38 per cent blamed poor government policy making or uncertainty about government policies.

The climate survey, which has been run annually since 2007, reported a record 75 per cent of Australians are concerned about climate change.

More than eight in 10 Australians support phasing out coal-fired power, even though Mr Taylor on Tuesday reiterated his view that coal is here to stay.

Shadow minister for climate change and energy Chris Bowen said the survey shows the “needle has shifted” in the public climate debate.

“Morrison has spent his time as Treasurer and Prime Minister developing slogans instead of policy,” he said on Wednesday.

“He’s always too little too late, and it’s Australians that bear the brunt through higher power bills and less new energy investment.”

Click on this link to read more of The New Daily‘s climate change coverage in the lead-up to COP26.