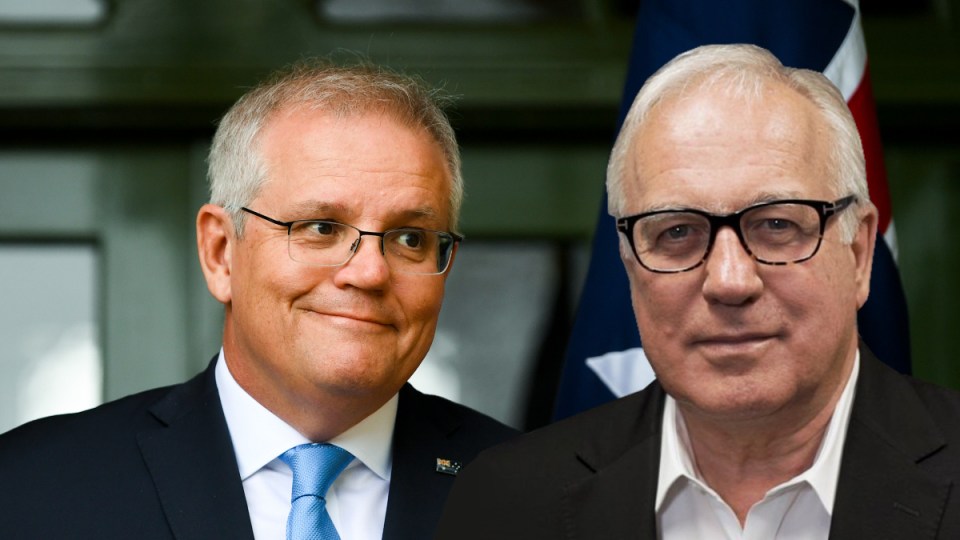 The federal government has yet to answer many important questions, writes Alan Kohler. Photo: AAP/TND
opinion

So when the Morrison government says it’s going to force the end of state lockdowns by cutting off financial support at 70 and 80 per cent vaccination, that’s really 56 and 64 per cent.

And it’s nowhere near enough.

Singapore is now 80 per cent (of the total population) vaccinated and is seeing its highest number of cases since the pandemic began – 2909 new cases on Friday and eight new deaths. Schools have had to close again.

The Doherty Institute modelling shows that if we open up at 70 per cent vaccination there will be an overwhelming 23,680 hospital ward admissions of unvaccinated people in the first 180 days, plus hundreds of the vaccinated.

What does that mean for hospitals? What happens if you have an accident or a heart attack? Will there be any point calling an ambulance? And if one eventually arrives, will you get a bed?

Has this been modelled? If not, why not? And if so, let’s see it.

For the first time in the pandemic, I’m now worried for my family – not so much about getting COVID-19 because we’re all fully vaccinated, but about getting something else, or having an accident, and having to go to hospital.

And we can all forget about elective surgery for a while.

For the first time in any of our lives, Australians might be unable to simply rely on the health system, which is an astonishing thought.

When lockdowns have to end because the federal government refuses to provide financial support for those affected, a third of the population will be unvaccinated and vaccination won’t be mandatory, except for a few industries and international travellers.

We can understand the pressure, especially in Melbourne, the world’s most locked-down city: Lockdowns and emergency payments can’t go on forever.

As Treasurer Josh Frydenberg said: “I put to you, if it’s not 80 per cent double‑dose vaccinations when we bring to an end the COVID disaster payment and the business support payment, then when is it?”

It’s not 80 per cent double-dosed, Treasurer, it’s 64 per cent, which is a different, much riskier proposition.

And mandatory vaccination gets some people very upset, as we saw with the recent riots in Melbourne, so you can understand why politicians are dancing around that.

You might be wondering why the government can even think about opening up at 70 to 80 per cent of adults vaccinated (56 to 64 per cent of everybody) if Doherty says this means tens of thousands of unvaccinated people ending up in hospital.

It’s because the modelling also says that the hospitalisation numbers can be significantly reduced with “test, trace, isolate, quarantine” (TTIQ) measures, so that’s what the politicians focus on.

But that modelling is based on 30 cases a day; TTIQ simply doesn’t work when there are thousands of cases a day, as there are already.

Also, the “I” in TTIQ – isolate – is almost as damaging economically as lockdowns, with businesses including supermarkets having to close for lack of available staff.

If there are close to 900,000 infections in the first 180 days after opening up at 70 per cent, as the Doherty modelling indicates, there would be so many people isolating that it would be the same as a full lockdown and the economy would stop.

And, of course, there would be no financial support from the government for businesses whose staff are at home isolating.

The one big positive is that the rate of vaccination has increased a lot, including for 12 to 15-year-olds, although we’re still well behind the rest of the world.

But beyond that, Australia’s pandemic response has become a mess of political spin and confusion.

That includes the question of mandatory vaccination.

The federal government is adamant that vaccination is free and voluntary and that won’t change … except for travellers, that is, who must show an International COVID-19 Vaccine Certificate, and federal aged-care workers.

Last week the Victorian government issued an amazing list of 118 “essential workers” who must be vaccinated by October 15 to go to work.

It covers just about everybody except baristas, who are arguably essential workers dealing closely with the public.

The rest of the country is mandating vaccination for health workers, plus a few others.

New South Wales has added churchgoers, but that might change once the church-going Dominic Perrottet becomes Premier this week.

There is no coherent national plan for who needs to be vaccinated, nor any guidance for businesses and event managers about what to do.

Will they be covered by public liability insurance and WorkSafe if they allow unvaccinated customers and staff onto the premises?

What are the employment law and privacy issues around mandatory vaccination?

The basic principle of employment law in Australia is that directions to staff must be both lawful and reasonable, but what is reasonable?

And can an employee who catches COVID-19 sue her employer for not having proper ventilation, or not requiring masks and distancing?

So many questions, so few answers, so much spin.

CORRECTION, October 5: An earlier version of this article incorrectly stated that the US and UK had fully vaccinated 64 per cent and 72 per cent of their respective populations. In fact, the correct figures are 55 per cent and 67 per cent.

Alan Kohler: So many pandemic questions, so few answers, so much spin