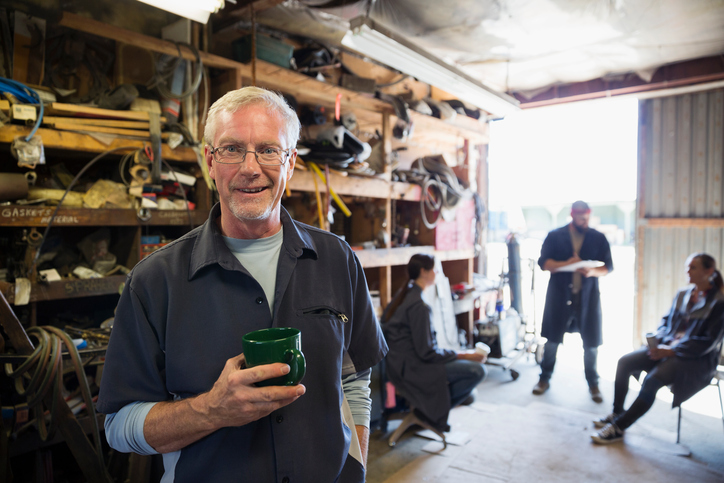 Older workers are being locked out by ageism regardless of skill. Photo: Getty

Older Australians are being locked out of the workforce despite growing need for their services, according to a range of recent research.

As concerns grow about a shortage of direct care workers, the Council of the Ageing (COTA) on Friday welcomed a new federal government advisory body, called the Council of Elders, to consult on care reform

It will consult with government on the delivery of new aged care funding after a royal commission exposed dire staff shortages across the sector.

The announcement coincided with the international day of older persons and Australia’s first ageism awareness day, which is sounding the alarm on barriers facing older people and their participation in the jobs market.

Advocates say older workers can be redeployed to address shortages in aged care, but they’re facing widespread discrimination from employers.

Just 67.1 per cent of people aged between 55 and 65 are participating in the jobs market, according to OECD data. For those over 65 the figure is 14.2 per cent, which is below the OECD average of 15.5 per cent.

Advocates say those figures don’t reflect the work choices of older people, many of whom find themselves locked out of the jobs market.

“If I decided to retire it would be very hard to come back and convince an employer that I’m still a good, productive worker,” he said.

“It’s an immense decision to retire … it’s one that should be delayed as long as possible,” Mr Versteege, 61, said of salaried workers.

“You soon realise it’s pretty empty once you stop.”

Getting back into the workforce once you quit as an older person means confronting the reality of ageism head on.

And in the labour market that can be crushing for would-be job seekers.

That means having a screen in place where employers say, “we don’t employ people over 50”, Mr Yates said.

“Then there is the situation where an employer doesn’t have that policy but faced with the prospect of employing someone from three applicants where two are under 50 and one in their 60s.

“They will not choose the older one,” Mr Yates said.

The AHRC found that if an extra 3 per cent of people aged 55 or over  joined the workforce it would add $33 billion to annual GDP.

And Australia increasingly needs the service of older workers.

As the below graph demonstrates, an ageing population is creating a  shortage of direct-care (aged care, health care, disability care) workers. 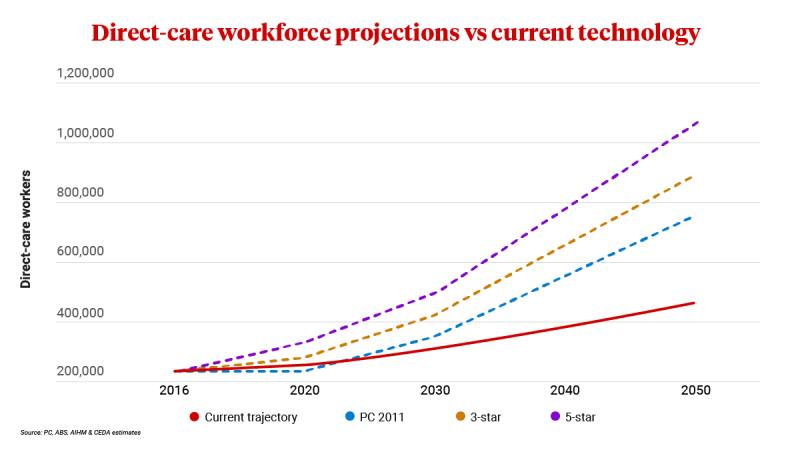 National Seniors Australia chief advocate Ian Henschke said even “rock bottom assessments” suggest there will be a shortfall of 110,000 staff within a decade if care standards are to be maintained at minimums.

“We should be training more mature age Australians to work in that area, particularly women who don’t have much super,” Mr Henschke said.

Despite that ageing, views about the workforce among employers are not keeping up.

“Research by the Australian Human Resources Institute has found that 51- to 55-year-olds were considered ‘older workers’,” Mr Henschke said.

A third of employers surveyed estimated that between a quarter and a half of their workforces weres made up of over-55s.

“Even though the workforce is increasingly ageing, employees are being viewed as ‘older’ well before their 60s,” Mr Henschke said.

Currently the age pension starts to reduce once a special work longer supplement of $7800, or $300 a fortnight, plus another allowance us $180 a fortnight, is added to a pensioner’s income.

“We think they should continue working even though they’ve got the pension,” Mr Henschke said.

“If you worked an eight hour day and got $30 an hour then that is your extra allowance gone.”

Any work beyond that would effectively be taxed at 50c in the dollar due to the loss of pension entitlement.

So to make more older workers available, extra earnings allowance needs to be added to the pension.

“In New Zealand the pension is paid to everyone regardless of income,” Mr Henschke said.

Ageing workforce facing discrimination even as demand for carers rises