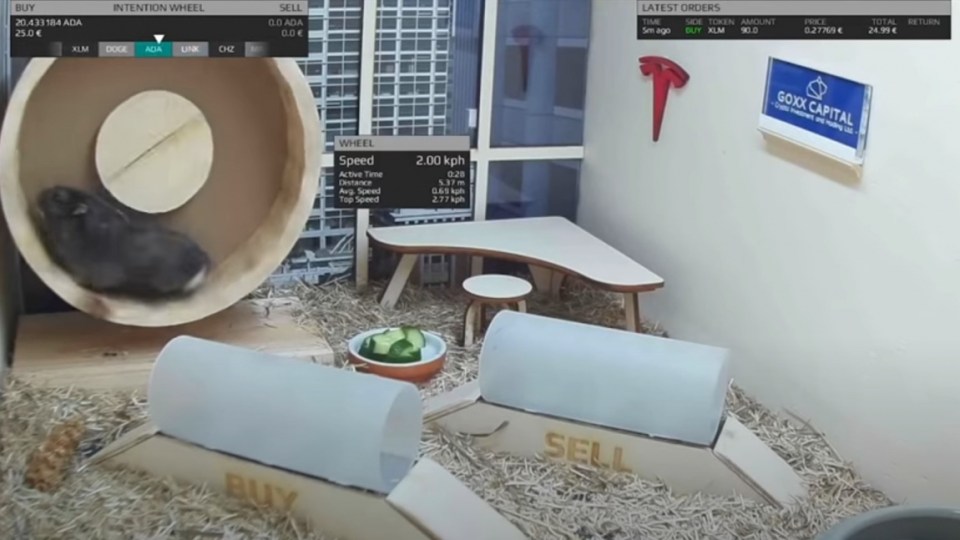 Someone in Germany is buying cryptocurrencies on the whims of a hamster. Photo: YouTube (mrgoxx)

A hamster in Germany is up nearly 30 per cent on his investments since he started buying and selling cryptocurrencies in June.

No, that’s not a typo. A hamster is randomly buying digital assets by performing various exercise routines to execute trades.

Known as Mr Goxx, the hamster live-streams his trading days from his rodent-sized office, where he selects which cryptocurrency to trade by running on a wheel, and then chooses whether to buy or sell it by running through one of two ‘decision’ tunnels.

The experiment has many people around the world wondering – and not for the first time – whether the average person would be better off picking stocks at random than investing time into researching the best ones to buy.

Steps Financial principal Antoinette Mullins, a licensed financial adviser, offers a categorical ‘no’ in response to that question.

She says the hamster stunt is a neat trick but nothing new.

Every couple of years, someone rolls out another animal who has got lucky picking stocks, she said.

But for every animal who gets it right, there is a whole zoo that doesn’t make the news because they get it wrong.

And here’s what is missing from the clicky headlines: Mr Goxx’s investment portfolio was down 15 per cent just two months ago.

A graph charting the value of his investments mirrors that of Bitcoin’s rollercoaster journey, with sharp rises followed by devastating crashes.

So, what is the key lesson here?

Randomly picking stocks could make you rich – there’s no doubt about that.

But it could just as easily leave you penniless. And who would want to bet it all on the spin of a roulette wheel?

Instead, she suggested budding investors ask for help from a professional beforehand.

“[A] long-term strategy is much better – and will pass the sleep test for you at night – than trying to time the market perfectly every time,” Ms Mullins said.

She offered four simple steps for new traders before they invest:

Only after going through these four steps should you begin researching what investments to make, she said.

“That’s like the cherry on top of the sundae – you don’t just go to the cherry … all of those are much more important than [choosing whether] stock A or stock B better,” Ms Mullins said.

She said a core stable of proven stocks should be the bulk of your investment portfolio and should match your tolerance for risk and asset allocation.

Then you can choose to add in a few optional extras that “maybe could hit the lights out like Mr Goxx happened to be doing”.

What a crypto-trading hamster can teach us about the sharemarket