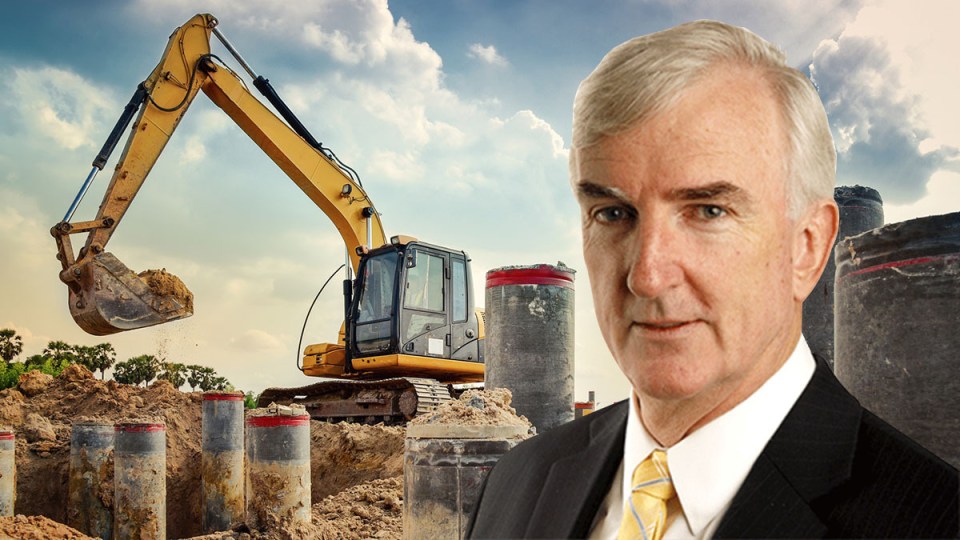 But the good news for the economy overall is that a record surge in transport infrastructure spending will more than make up for the housing downturn.

Most of the spending will be on numerous big ticket projects that were in state government pipelines well before COVID hit, with some extra sauce from stimulus spending in the delayed round of 2020 budgets.

The timing of the mega projects getting underway is most fortuitous given restraints elsewhere, especially the looming housing dive. 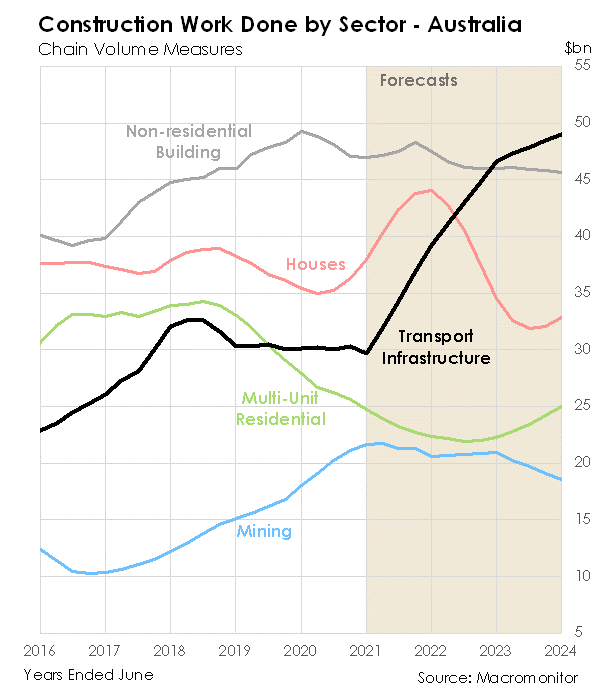 “In the short term, lockdowns and restrictions on movement of people will impact activity in a number of areas of building, particularly in Sydney,” Macromonitor economist Natalie Senga said in the report’s release.

“But transport infrastructure construction is less concentrated in dense metropolitan areas, and increased safety requirements have a lesser impact on horizontal projects.

“In the longer term, the prospects for building activity are also poor. House building, which has been the key driver of activity in the past 12 months, faces a massive hole in demand once the majority of the HomeBuilder backlog gets done over the next 12 months.”

Macromonitor expects the housing construction spend will peak at $44 billion this financial year, but then dive to a multi-year low of $32 billion in 2023-24.

From an employment perspective, many of the trades and materials required for housing don’t translate to major road, rail and tunnelling operations. Not many chippies also drive D9s.

“The next three years will be characterised by major transport infrastructure investments in both capital city projects, such as Sydney’s Metro West rail line and Melbourne’s North East Link road, and regional works, including Inland Rail and upgrades on the Bruce, Pacific, and Princes highways,” Ms Senga said. The colours in the Macromonitor graph of projects consuming at least $300 million a year tell the story of New South Wales and Victorian dominance in the infrastructure space.

As regularly reported on these pages, for all the spin and political advertising, it’s the states, not the federal government, doing the heavy infrastructure lifting.

The Commonwealth is promising to spend $110 billion over 10 years on transport infrastructure. If it’s geared up to that level of spending in time, that would represent just 22 per cent of the peak spend.

Treasurer Frydenberg’s pandemic response added just $1 billion a year to its existing pledge – 2.5 per cent of what is being spent this financial year.

Matildas will be keen to forget 7-0 drubbing by Spain
Upcoming stats will reveal where and how hard rates are hitting economy
Victorian MPs pocket a tidy 2.75 per cent pay raise
Reserve Bank review isn’t a ‘get the governor’ exercise: Jim Chalmers
‘Violence for weeks’ feared after landmark US abortion ruling
Aussie Hannah Green within striking distance of Women’s PGA Championship lead
Madonna King: From Kabul, more pictures that will linger in memory’s unfading album
Today's Stories

Michael Pascoe: Bleak outlook for housing construction but infrastructure is set to soar