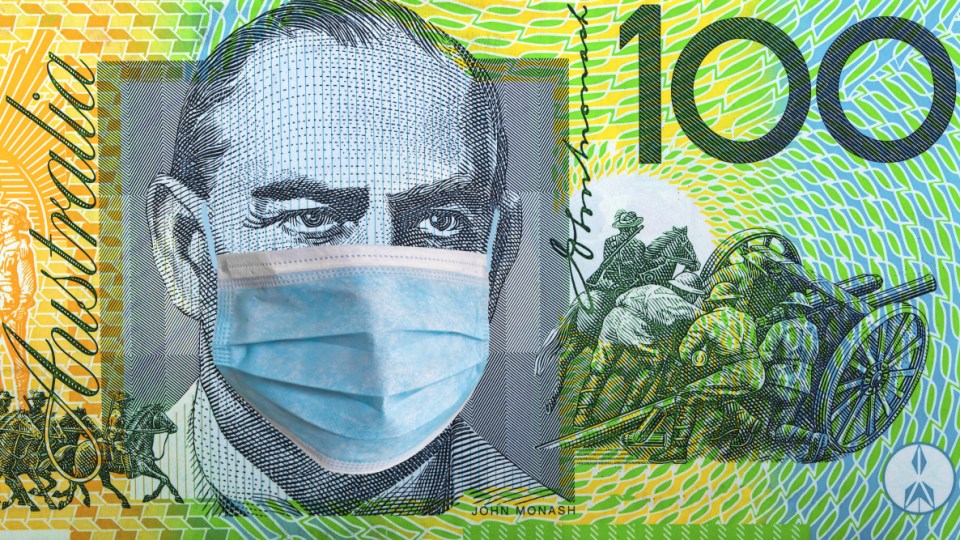 Australia is unlikely to roar back from the latest COVID outbreak, economists fear. Photo: Getty

Workers won’t enjoy an economic snap-back when lockdowns ease as economists brace for tens of thousands of job losses in coming months.

As New South Wales reported 642 COVID cases on Friday, fears consumers will be hesitant to go shopping or eat out once restrictions ease are driving new concern the next economic recovery will take much longer than the last.

The key difference this time is that case numbers in NSW are unlikely to be driven to zero before the state ends its lockdown, as the focus will instead be on driving higher rates of vaccination.

Some economists therefore believe that Australians, unaccustomed to getting out and about amid double-digit case numbers, will take longer to hit the shops and resume other activities once restrictions ease.

Some say the experience overseas shows there will be a hand brake on the economy for years to come, as living with COVID creates constant disruptions for businesses and workers.

According to Indeed APAC economist Callam Pickering, the outlook for workers is already worsening each day in what feels like new recession.

“The economy is contracting by a large amount – we’re effectively in a recession already,” Mr Pickering told The New Daily.

NSW Premier Gladys Berejiklian is now preparing the state and the nation for the grim reality that the Delta variant is out of control and can’t be contained.

Ms Berejiklian announced on Friday that the state will lift a three-month lockdown at the end of September as vaccination rates rise, even if the state is still reporting COVID cases.

“We can’t pretend that we will have zero cases around Australia with Delta,” she told reporters on Thursday.

“Once you get to 80 per cent double dose [vaccinations], and you have to open up, everyone will have to learn to live with Delta.”

Treasurer Josh Frydenberg and the Reserve Bank are optimistic that the economy will rebound substantially once lockdowns ease in October.

Economists at Commonwealth Bank, however, worry that households haven’t learned to “live with the virus” and that this “will mean that the economic recovery, at least initially, is a bumpy ride”.

It comes after Australia staged a remarkable COVID rebound earlier this year that saw the jobless rate fall below pre-pandemic levels to 4.9 per cent.

Unemployment fell further to 4.6 per cent in July but economists say this masked a massive reduction in hours worked ahead of “nasty numbers” in August and September – months that capture NSW’s lockdown fully.

Commonwealth Bank chief economist Gareth Aird predicts the jobless rate  will spike in the September quarter and end the year at 5.5 per cent, before falling back to 4.9 per cent midway through 2022.

That would represent a 12 month delay in the jobs market recovery.

“Many individuals may be deterred in the beginning from getting out and about as COVID cases increase significantly,” Mr Aird said.

“[The reopening] will be very different to exiting previous lockdowns … it will take time for economic momentum to begin again.”

In real terms, Commonwealth Bank is expecting tens of thousands of job losses amid the worst wave of lockdowns since April and May last year.

Employment levels fell by 36,000 people in NSW over July and this will get much worse during August and September.

These job losses will affect the economy by slowing growth in consumer spending and wages.

RBA research published on Wednesday found that households reduce their spending by 9 per cent on average when they lose their jobs.

That’s a big risk for the recovery, because if workers buy less stuff then bosses will employ fewer people, in a downward spiral that extends recession.

Consumer confidence has already fallen well below the 30-year average in recent weeks, according to the weekly survey conducted by Roy Morgan and ANZ Bank.

It means the consumer-led recovery touted by Treasurer Josh Frydenberg earlier this year is on ice for the time being.

And Mr Pickering said it would take time to thaw out when lockdowns ease.

“People will be less willing to go to shopping centres, restaurants and things like that, because of the associated health risks,” he said.

“That wasn’t the case when we emerged from lockdown the first time.”

The prospect of a longer recovery means workers’ purchasing power will be flat heading into Christmas, particularly for public sector workers.

Public sector wages growth was the lowest on record, falling to 1.3 per cent annually, while private sector growth was slightly better at 1.9 per cent.

It translates to a 0.2 per cent rise in workers’ purchasing power once price increases are factored in – consistent with the eight-year average.

Economists said it was a disappointing result because it showed a tighter jobs market had done little to boost wages growth over the June quarter.

Bosses typically take a while to increase wages when finding workers becomes harder.

But outbreaks in NSW and Victoria since July will likely stop employers lifting pay altogether after largely erasing the earlier jobs recovery.

“It will take some time for low unemployment rates to translate into a noticeable acceleration in wages, holding back inflation and pushing out the prospect of policy tightening from the Reserve Bank,” she said.

Ms Masters has been looking at what’s going on in countries like the UK to understand how the Australian economy might fare when learning to live with COVID-19 over the December quarter.

She said even opening up with higher vaccination rates imposes COVID-related costs for businesses and workers.

That’s because high infection rates will persist, shutting down businesses and forcing many workers to self isolate when they become infected.

“It doesn’t mean the economy doesn’t improve, but it will take longer to do that … it’s a bit sobering.”

The UK is reporting more than 30,000 new COVID cases each day at the moment and Ms Masters estimates about 1 million people are in isolation at any given time.

Translating those numbers to Australia, 380,000 workers could be forced into isolation at any given time, even once vaccination is widespread.