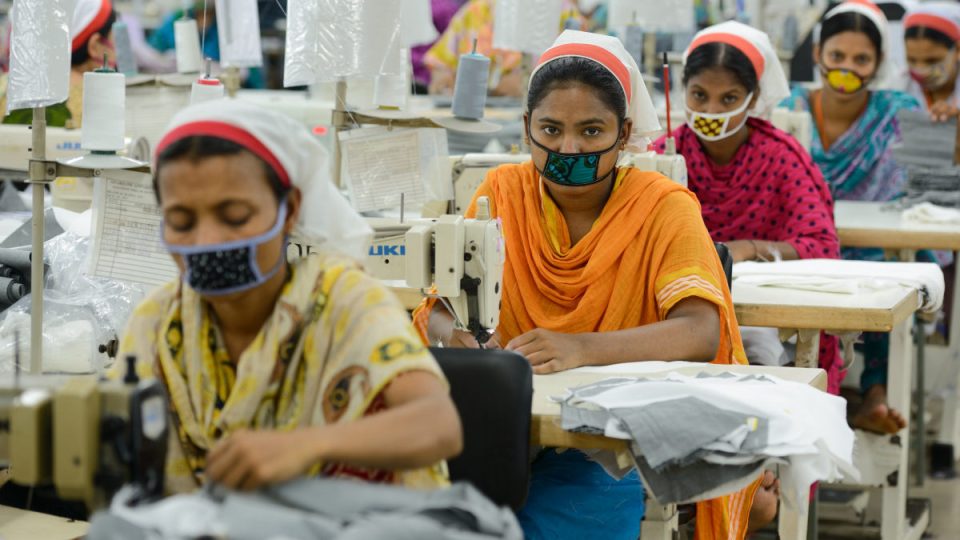 New research has found a big gap between what Australian shoppers say and what they do. Photo: Getty.

Australian shoppers are failing to walk the talk when it comes to ethical fashion, driving fears that big retailers are getting away with profiting from modern slavery in their supply chains.

Although 87 per cent of Australians want to buy more ethical products, only 46 per cent do so regularly, a new Baptist World Aid survey finds.

It’s a gap between intention and action that is holding back efforts aimed at ending supply chain exploitation, which is rife among Australian retail brands and actually worsened during COVID-19.

Peter Keegan, Baptist World Aid’s advocacy director, said shoppers have “seen the stories of child labour and exploitation in factories” but lack the necessary information to vote with their wallets.

“It’s a bit overwhelming to look at a big problem like the global supply chain that produces our clothes and to work out how to start,” he said.

Almost four in 10 of the 2000 consumers surveyed earlier this year said not knowing which brands are ethical is a big barrier to shopping more ethically.

A larger proportion said it was more difficult to work out which brands to shop with in store versus online.

Modern slavery: Shoppers in the dark

The shopping landscape is a minefield for consumers as Australian retailers are more likely to have a poor supply chain record than a good one.

Australian retailers have performed poorly in supply chain audits for more than a decade, with annual Oxfam and Baptist World Aid reports exposing grisly practices across the industry every year.

Their reports have singled out huge brands such as Noni B and Just Group while praising the work of Outland Denim, Adidas, Bonds and Bras N Things.

But despite all this work, sales across the brands named and shamed for poor practices have continued to rise, appearing to confirm the findings that many shoppers are unaware of what really goes into the clothes they buy online and in store.

With this in mind, Mr Keegan said Baptist World Aid had published a new online quiz allowing consumers to identify their shopping needs and tastes against a database of retailers with ethical supply chain practices.

“It’s about having simple information available and then using it,” he said.

Many shoppers are also worried about the effect of ethical choices on their hip pockets.

About a third (33 per cent) of shoppers said price was a major factor in their decision to forgo brands for ethical supply chains.

“There doesn’t need to be a conflict … we can get great products that are affordable for us that are produced in ways that respect workers,” he said.

Prominent examples are H&M and Kmart, which are rated with a B score in Baptist World Aid’s latest report.

“Those on lower incomes actually have to engage much more with their consumption and they’re making more reflective decisions,” he said.

There have been recent efforts to arm consumers with better information at checkouts, including new laws forcing big retailers to report on modern slavery in their supply chains each year.

But advocates including Mr Keegan have argued the reports do not go far enough and additional regulation is needed to ensure consumers know which stores at their shopping centre profit from slavery.

One suggestion has been a mandatory labelling scheme that would show shoppers a supply chain score when they go to purchase a product.

Dr Harrison said such a standardised information system could be useful in filling the gap created by businesses prioritising profits over ethics.

“Whenever I’m consulting for businesses they say, ‘What’s in it for us?’ … they’re still driven by a profit objective rather than a social one,” he said.

But Dr Harrison also stressed such a system would be more difficult to create than the successful food star health rating scheme, largely because ethics are more complicated than nutrition.

“We have to come up with better ways to measure what we mean by an ethical brand,” he explained.

Meanwhile, Mr Keegan said Australia’s modern slavery reporting system, which is in its first year, could be the first step towards more stringent requirements.

“We absolutely encourage more movement in that [labelling] direction,” he said.

“The modern slavery act demonstrates that government does have a role to play in regulating what companies do in their supply chains and making sure that information is provided to Australian citizens.”

Modern slavery: Shoppers failing to walk the talk at checkout