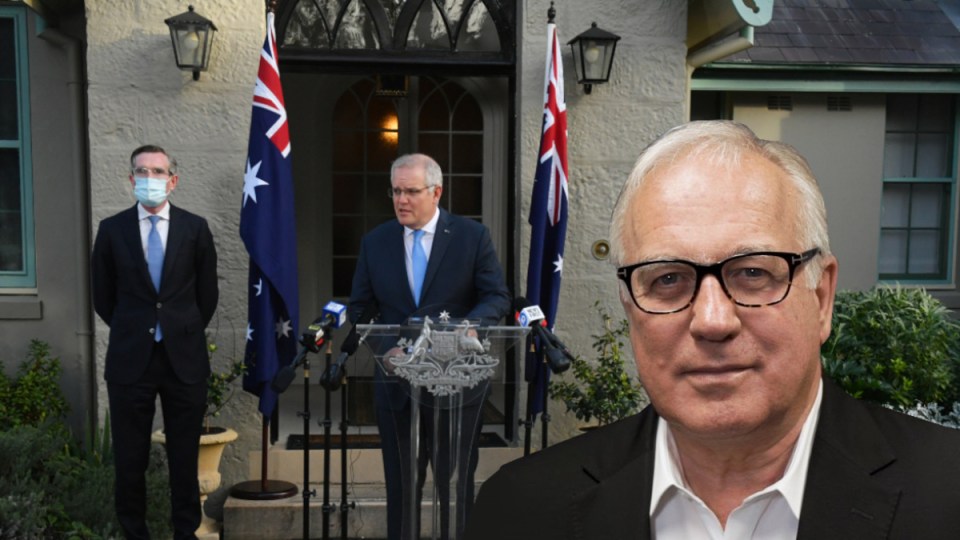 Little wonder the Morrison government is paying cash directly to employees stood down in the Sydney lockdown, with a cap and time limit, after the way JobKeeper was plundered last year.

And what’s being paid to companies this time is both miserly and shared with the state government.

Of course, this week’s program is being spun as generous to a fault, and Victoria is helping by complaining about not getting it in May and June, but it’s the JobKeeper you have when you’re not having JobKeeper.

That JobKeeper was a fiscal disaster was mostly due to the government’s poor design and administration of it, but too many businesses were cold-bloodedly greedy as well, so that billions of dollars were grabbed by people who didn’t need it, and aren’t giving it back.

Not that the government is admitting any of that, of course: It’s pats on the back all round for saving 700,000 jobs, except … it’s not being repeated.

Those jobs cost $132,000 each and at least a quarter of the money was hosed into the bulging bank accounts of businesses and private schools whose profits actually increased last year.

A small example of many: A friend knows a concreter who didn’t miss a pour last year and whose revenue increased, but he pocketed $1.3 million from taxpayers, laughing like a drain.

Australia’s business and political leaders should be leaning on those who wrongly profited from JobKeeper and the Cash Flow Boost to cough it up and help those suffering in the NSW lockdown now, and those who will suffer in lockdowns to come until Australia is vaccinated.

But no one’s offering and no one’s asking.

In these pandemic dog days between the end of JobKeeper and the arrival of herd immunity from vaccination, the unique Australian constitution is telling.

Lockdown and JobKeeper an Australian problem

Australia is almost alone in the world in having fiscal and health decisions made by different sets of politicians.

Would Gladys Berejiklian have waited so long to introduce a Stage 3 lockdown, instead of quickly going to Stage 4, had she been confident the federal government would rescue the businesses affected?

Of course not. In fact, it’s almost impossible for a state government to introduce a Stage 4 lockdown without federal support for the businesses affected given the dire impact the decision has on so many people’s lives.

Is what was announced this week enough to support Stage 4? We’ll see, but it doesn’t look like it, certainly not a long Stage 4.

And would the federal government have stopped JobKeeper in the first place and withheld fiscal support from Victoria if Scott Morrison was making the decisions to lock down and ruin lives? Definitely not.

Actually, it’s probably a good thing he’s not making those decisions given what’s going on in the UK right now: The Conservative government, untroubled by state premiers, is opening up and going mask-free with 30,000 Delta cases a day, and rising.

It’s a risky experiment opposed by all medical experts, but it’s the sort of thing you do when you’re more worried about economics than health.

And the UK’s rushed opening is also the sort of bet you can make if 70 per cent of the population is vaccinated, which has meant falling hospitalisations and deaths despite the big increase in infections.

Australia, let us remind ourselves, is less than 10 per cent vaccinated, but given that Mr Morrison is unlikely to launch an inquiry into himself we’ll have to wait for the books to be written by investigative journalists about that cock-up.

It seems to have been a catastrophic combination of mismanagement and bad luck.

It seemed like a good idea at the time to focus on the vaccine that was being developed here (by the University of Queensland) and the overseas one that CSL could make here (AstraZeneca).

Maybe they should have pressed on with the UQ vaccine even though it was giving false positives for HIV (better than false negatives), but it’s too late now.

And the blood clot problem with AstraZeneca could have been handled better, although the media and some state health officials didn’t help.

Those problems were bad luck, as are the delays with Novovax, but the failure to buy enough Pfizer doses last year, and then to let it slip through the official fingers again this year, was obvious incompetence.

And now the government is compounding that by trying to spin its way out instead of admitting the mistake, welcoming Kevin Rudd’s help in getting more, and moving on.

As for quarantine, epidemiologists were warning from the start that the ease of aerosol spread meant that using air-conditioned hotels for quarantine was dangerous, and now the much more easily spread Delta variant is making that triply clear and making a mess of the economy in 2021.

If the Labor Party wins the next election, Anthony Albanese should, and no doubt will, establish a royal commission into Australia’s handling of the pandemic, which will focus on exactly what happened with the vaccines and the decisions about quarantine, as well as state government decisions about lockdowns.

It should also expose the organisations that received JobKeeper money, kept it, and shouldn’t have.

Of course, if the Coalition wins the election it will all stay spun and buried.

Alan Kohler: Spinning out through the pandemic dog days