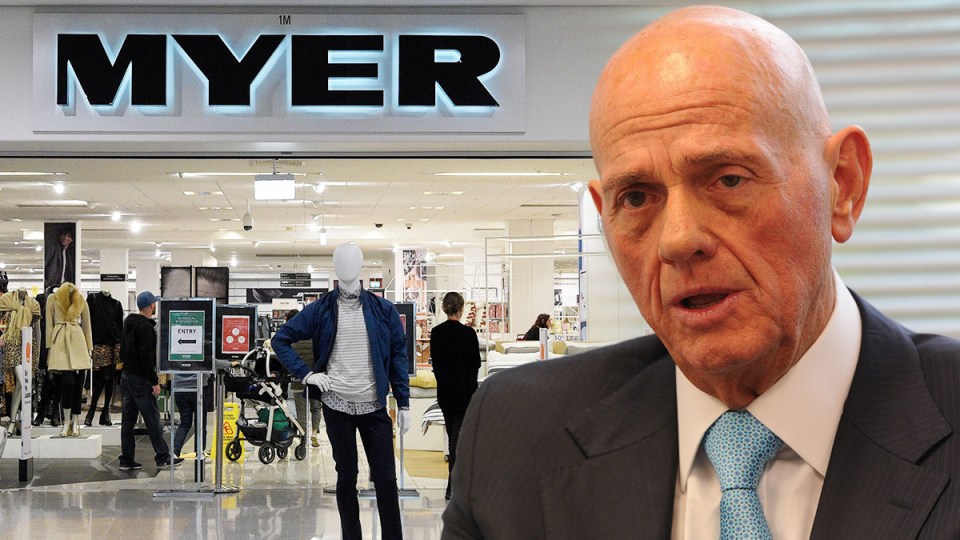 Solomon Lew has lost heavily on Myer and is trying to find a way to make it up. Photo: TND

Solomon Lew appears to be playing one of his renowned long, high  pressure games with department store chain Myer after building his stake from 10 per cent to 15.77 per cent in recent days and calling for a shareholder meeting.

The talk around the media is that Mr Lew wants to take control of the troubled department store chain but that, says consultant Brian Walker of Retail Doctor, is unlikely to be his aim.

“I think his aim is investing low, shaking up confidence, increasing his stake but not actually taking over the company,” he said.

Mr Lew, through his listed group Premier Investments, is certainly shaking up Myer. He has long been a critic of the retailer’s board and after his recent $16.4 million splurge on more shares, the board gave in and offered Lew’s interests a board seat.

Them, as they say, is fighting words.

He is, as Mr Walker says, “extremely dissatisfied with the board, to the point where he lobbied hard and advocated the removal of the chairman a few months ago.”

On that front he was successful, with then chair Garry Hounsell standing down in favour of Ms Stephenson in October.

Why Solly is sore

What irks Mr Lew so much about the current board is clear once you look at the share price. Back in March 2017 he paid $101 million for just under 11 per cent of Myer at $1.15 a share.

That holding is now worth $39 million so while he may have thought he was bottom fishing back then, turns out he wasn’t. This week’s purchase was done at 40c a share.

But Mr Lew has a lot more invested in Myer than just his share holding.

“He’s a supplier to Myer and he’s a competitor to Myer,” Mr Walker said.

To go into the detail of that, his companies supply Myer with goods as well as competing with it by selling similar products through its labels like Just Jeans, Smiggles and Portmans.

So if Myer does badly he does badly through his supply contracts but he might be partly compensated if his brands outdo Myer.

What Solly wants from Myer

Probably he doesn’t want to own the Myer business, which would cost him another $303 million on top of what he owns at current prices. What he wants is the business to perform well so his wholesaling operations will earn more.

Solomon Lew has history in playing the long game.

Back in 1997 he bought an 11.8 per cent stake in ritzy retailer Country Road and held it for 17 years, seemingly hoping someone would buy him out at a fancy price.

That didn’t happen until South African firm Wooworths (not the Australian supermarket chain) came along looking to buy David Jones.

Mr Lew then bought 10 per cent of David Jones and the resulting pressure on the takeover bid saw Woolworths buy out his Country Road stake for $207 million.

No white knight is likely to appear to buy Mr Lew out of Myer so his plan will look different to the Country Road adventure. He has fired up his lawyers, Arnold Bloch Leibler, to get his hands on the Myer share register so he can talk other shareholders into calling an extraordinary general meeting (EGM).

ABL has a history with Mr Lew and the retailer. Its senior partner Mark Leibler sat on the board of Coles Myer (as it was then) in the decade to 2004. In 2002 Mr Leibler was the sole voice on the board resisting a move to force Mr Lew to resign as executive chairman of the company.

Following a massive and theatrical shareholder meeting at Melbourne’s tennis centre, Mr Lew was forced to step down when major shareholders turned against him. Mr Leibler, originally appointed at the behest of Mr Lew, stepped down a couple of years later.

If an EGM is called Mr Lew would use it as a venue to force through board changes he wants to see – if he can get support from enough people on the share register prepared to put faith in him.

He could have one ace up his sleeve to help in that argument. Recently Premier Investments CEO Mark McInnes stepped down and was replaced by Richard Murray, the man behind JB Hi Fi’s success.

Mr McInness, a former David Jones CEO headhunted by Mr Lew after he was forced out by sexual harassment allegations, is widely regarded as the country’s top retailer.

“Mark McInness is leaving Premier and he’s a man with consumate experience so it wouldn’t surprise me to see him come on the Myer board,” Mr Walker said.

However in the long term Myer’s future is not bright, Mr Jackson said.

“They won’t die but they’ll contract to the point where someone will buy the brand as an online operation,” he said.

“So the bottom line is the value of Myer shares might be zero but there are people who have lent them money or signed long term leases with them so they will prop them up longer than you might expect.”

“They’re not laid out for shoppers to make decisions they way they do now and foot traffic was declining even before CIVID,” he said.