The Morrison government has set its heart on a gas-fired economic recovery that is already failing, according to new research.

A new paper by progressive think tank The Australia Institute found that gas is a minuscule employer in the overall economy and has actually shed employees during the recovery from COVID-19.

The Australia Institute classifies the gas industry as involving the extraction and distribution of gas and its downstream use as a domestic and industrial fuel, in electricity generation, and as a feedstock for manufacturing materials like plastic and chemicals.

“Employment in gas fell faster than any other industry during the crisis, but it is so small we didn’t notice the shrinkage and it didn’t have an impact on our recovery,” Dr Denniss said.

As the below chart shows, the post-COVID recovery has been driven by labour-intensive industries such as retail, professional services, health and social services.

Employment in health and social services alone has grown by more than 2.7 times that in the gas sector since last May, while the overall economy has added 913,000 new jobs. 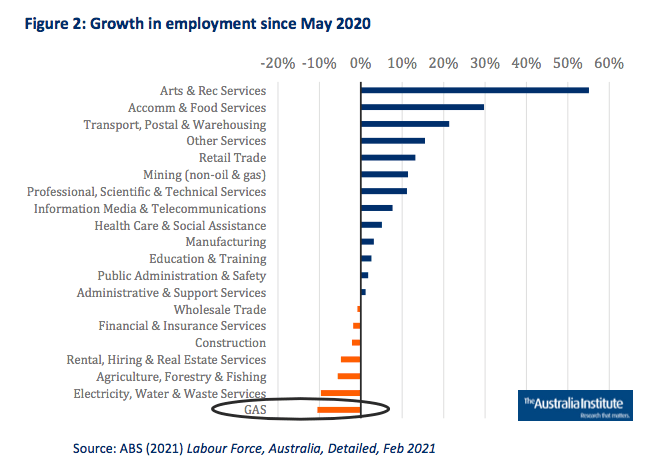 Had the rest of the economy declined at the same speed as the gas industry since last May, “total employment would have decreased by 1.3 million,” Dr Denniss said.

But in the past month alone the government has promised $2.04 billion to keep the country’s last two oil refineries in operation, committed $600 million to build a new gas-fired generator in the Hunter Valley, and pledged a further $254 million in gas subsidies in the federal budget.

Given the strength of employment growth in other sectors, that money could have been spent more productively elsewhere, Dr Denniss said.

However, CEO of the Australian Petroleum Production and Exploration Association, Andrew McConville, said the gas industry would have a growing role in building the economy.

“Right now, our industry contributes $62 billion (3.2 per cent) to the economy and around 13 per cent of exports,” he said.

“But this is just the tip of the iceberg. A recent EY report showed under the right investment settings, the oil and gas sector could provide a $350 billion boost to the economy and more than 220,000 jobs over the next two decades,” Mr McConville said.

But those figures were challenged by Dr Denniss, who pointed out that while the manufacturing sector employed 793,142 workers, only 13,929 were directly employed in industries using gas as a feedstock.

Gas demand in South-East Asia is expected to double by 2040 and “we need to able to capitalise on that,” Mr McConville said.

However, Dr Denniss said even with high growth rates, the output of the gas industry would remain small.

“If somehow the Australian economy grew 4 per cent a year for the next five years (an overall 22 per cent expansion in the size of the economy) and the gas industry grew at three times that annual rate (12 per cent a year for an overall expansion of 78 per cent), then it would have contributed only 3 percentage points to the overall growth profile,” Dr Denniss said.

“The gas sector is simply too small to be the sole reason for any future growth story.

“Future growth requires co-ordinated policies, or good luck, across a range of industries.” 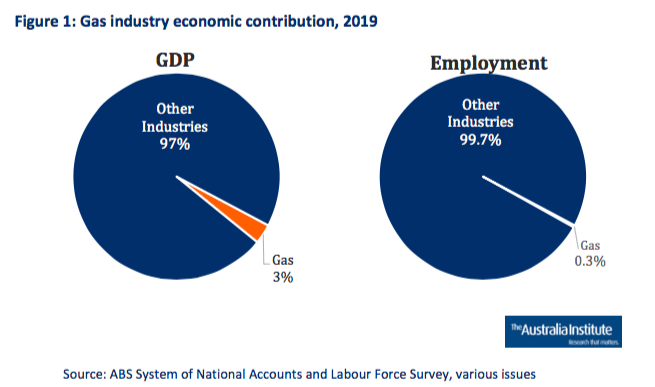 Independent economist Nicki Hutley said moves by the government to finance gas power generation were going against technological development in the sector.

“The price of gas as an input is going up and it makes it one of the most expensive forms of energy,” Ms Hutley said.

“Why would you do it when a combination of renewable investment and storage, whether pumped hydro or battery, create long-term sustainable jobs with export opportunities.”

Energy Minister Angus Taylor did not respond to questions from The New Daily.

But in a statement earlier this month he said: “Gas is a critical enabler of Australia’s economy and helps to support our manufacturing sector that employs over 900,000 Australians.

“Without action to address supply, industry and households will be faced with higher prices, disruptions in supply and unplanned outages.”

Graham Bethune, principal of consultancy group EnergyQuest, said the price of gas had fallen since before the crisis and this would make the fuel more cost-efficient for industry.

While some of that was due to pandemic-induced drops in demand, some of the price fall could be expected to last, he said.