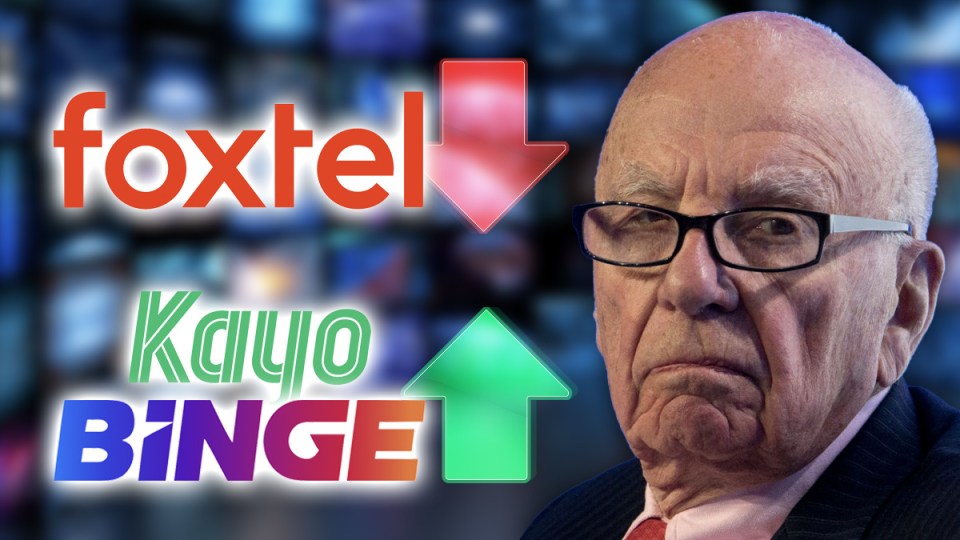 Foxtel customers continue to desert the group’s traditional pay-TV offerings as they take up lower-cost streaming options within the Foxtel stable – a trend that is going to challenge profits in coming years.

The Foxtel insight came as Rupert Murdoch’s News Corp announced a move into the black for the March quarter with a $US96 million ($123.55 million) profit compared to a $US1 billion loss for the same time last year.

Overall revenues in the Foxtel subscription video business were up 13 per cent, or $US61 million, to $US523 million. But $14 million of that came from foreign exchange fluctuations, meaning that real business revenues actually rose only 10 per cent to $US509 million. 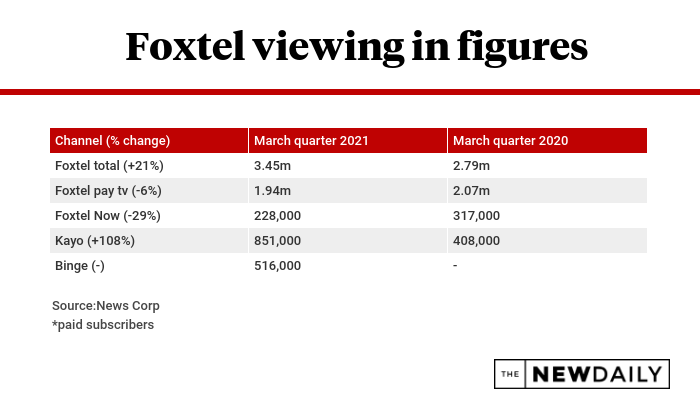 Subscribers to the traditional pay-TV offer fell 6 per cent to 1.94 million while newcomer Binge gained 526,000 subscribers from its standing start last May. The sports streaming service Kayo more than doubled its viewership to 851,000 pay customers.

While growth in those new options is good news “subscriber churn was 20 per cent,” said independent media analyst Peter Cox.

“Back in the good old days it was 12 per cent, and a year ago it was 17.5 per cent. That churn is being driven by people switching from being broadcast [pay-TV] subscribers at $80 a month to being streaming subscribers at much lower rates,” Mr Cox said.

The company’s subscription rates show the difference starkly. Foxtel pay-TV subscriptions range between $49 and $104 a month, and its original streaming service, Foxtel Now, costs between $25 and $109 a month.

Binge, a Netflix and Stan competitor, costs between $10 and $18, and the sports-focused Kayo between $25 and $35. The subscription figures show clearly that viewers continue to desert the traditional medium.

It lost 29 per cent of its subscribers, with many of them likely going to the cheaper offers internally.

The streaming future for Foxtel will depend on winning large numbers of new subscribers to defray the erosion of its higher-margin traditional business.

To date that hasn’t been happening, as is evidenced by the low rise in subscription-TV revenues once the foreign exchange gain is removed.

And given the highly competitive Australian streaming scene that will be a tough call, with Netflix well ensconced, Stan growing strongly and big hitters like Amazon and Apple now in the market.

Kayo’s numbers have been strong and it has benefited from $US22 million in cost cuts it managed to wring from Australian football codes. But it is still in a difficult situation.

“It is all very well having a low subscription [cost] but it is not earning what it costs them to buy sport,” Mr Cox said.

“If they truly accounted for it [sports costs] directly it would show a big loss.”

News Corp’s results also highlighted the continuing decline in print media revenues. When the sale of US business News America Marketing is taken out, the News Media operation, which includes US and UK papers, it leaves revenue growth of only 2 per cent and a 67 per cent decline in pre-tax earnings to $US8 million.

While newspapers are trying to switch to a subscription-based online model to boost revenues this is not going well at significant parts of News. While Australian subscriptions grew by 24 per cent to 760,000 they fell by significant levels at the New York Post and were flat or lower at UK papers. 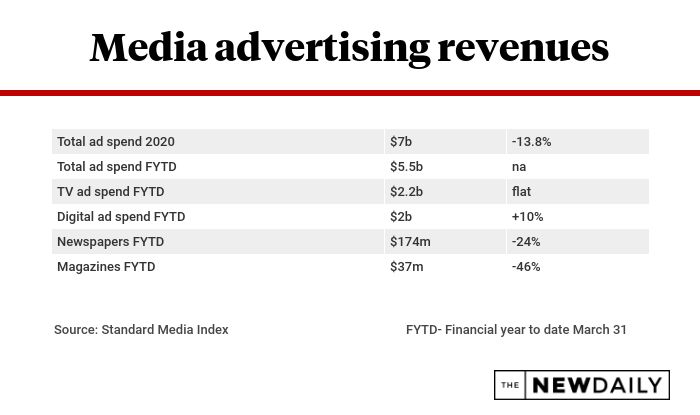 The continued collapse of print revenues is clearly visible in the Australian market, according to Chris Walton, principal at media buyers Nunn Media.

“If you look at the nine months of the financial year to the end of March, advertising revenues for all media were $5.5 billion,” Mr Walton said.

“That means print-ad revenues are only 3.8  per cent of all media ad revenues. The often mentioned decline of print shows no sign of abating.”

The pride of the News Corp print stable, Dow Jones, which owns The Wall Street Journal, showed revenue growth of $US24 million, or 6 per cent. But foreign exchange gains again accounted for $US4 million of that.

The Australian television advertising market is beginning to bounce back from lows caused by the coronavirus.

Standard Media Index Australian managing director Jane Ratcliffe said “figures in March were up 2 per cent but from what we can see in April it was up 20 per cent and it’s going to be up lots more.”

However, overall ad revenues are yet to hit the high point reached in March 2017, Mr Walton said.