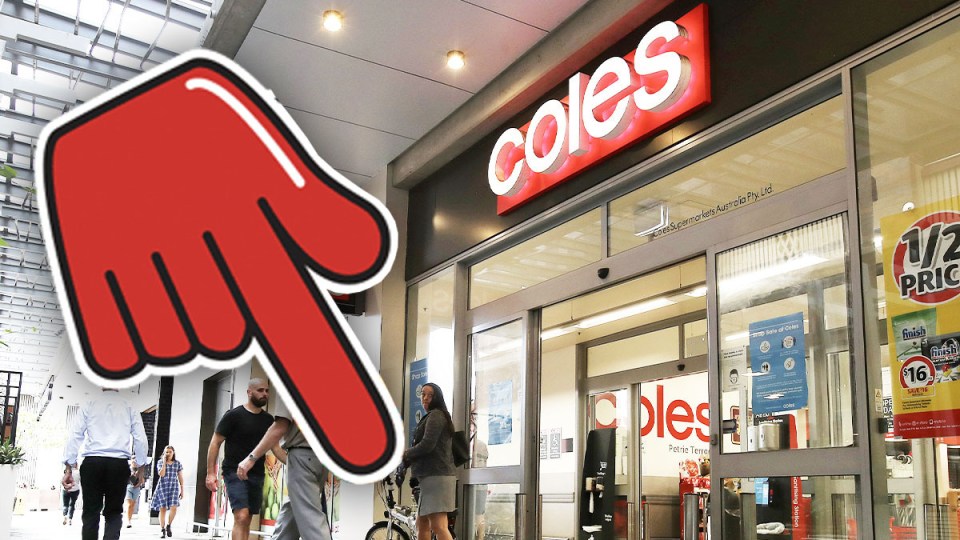 Prices are going down as Coles takes on Woolworths. Photo: TND

In a desperate bid to catch up to rival Woolworths, Coles is dropping prices on hundreds of groceries in a revival of its ‘down down’ discounting campaign.

The supermarket chain has slashed between 5 and 35 per cent off popular products – from free-range eggs to bottled water – since the start of the year, as the infamous “big red hand” reappears in supermarket aisles.

Coles announced the return of its ‘down down’ campaign on Thursday, revealing more than 250 prices have already been slashed in a move that’s driving hope the supermarket price wars of yesteryear are back on.

“We are more committed than ever to lowering the cost of [the] weekly shop,” Coles executive Greg Davis said.

Coles’ ‘down down’ program reduces prices on popular grocery items for an extended period, rather than spot sales, which only last a few days.

So far reductions have hit home-brand dried pasta (down 17 per cent), cheese slices (down 7 per cent) and orange juice (down 5 per cent), among others.

It’s all good news for consumers after prices at both Coles and Woolworths rose faster than wages in 2019-20 – eating into household budgets.

But the latest version of Coles’ big red hand will probably be smaller than its efforts during the peak of the supermarket wars six years ago, retail expert and QUT associate professor Gary Mortimer told The New Daily.

Not quite so ‘down down’ this time

That’s because the supermarkets have realised too much competition just drives a race to the bottom that eats into their profitability.

Professor Mortimer said Coles’ return to ‘down down’ is more about the chain trying to reclaim a highly successful marketing campaign after finding itself on the back foot to rival Woolworths in the wake of COVID-19.

In other words, expect the TV ads to return, but don’t hold your breath for price drops to match.

But even if prices don’t go down as far in the past, the promotion’s return has already drawn a response from Woolworths – and that means cheaper groceries for you.

For example: last month Coles dropped the price of its barbecue chicken by $1. Within 24 hours, Woolworths matched it.

All this comes as German giant Aldi looks to extend its reputation beyond price, recently pledging to launch online amid a revamp of stores.

Are the price wars back? Coles v Woolworths as discount campaign makes comeback