Young people are being left behind in the economic recovery from COVID-19, according to one of the nation’s leading economists.

Employment as a proportion of population is still 2 percentage points lower than it was in March 2020 for people aged 15 to 24.

“Young people who are in full-time study – their employment is basically back to where it was, or a little bit ahead of where it was, before COVID,” Professor Borland said.

“But young people who have finished full-time study – they have fallen behind. And since September last year, any recovery for them seems to have plateaued or stopped.” An analysis of ABS labour force data conducted by Professor Borland shows that, in January, employment as a proportion of population was 5.1 percentage points lower for young people not studying full-time than it was for those attending full-time study.

The research found that employment in January was up 1.3 per cent on January 2020 levels for full-time students, but down 3.8 per cent for young people no longer studying full-time.

Professor Borland said the jobs lost by those no longer studying full-time were mostly full-time positions and people with lower levels of education were hit the hardest.

“It raises fears that we’re starting to see the usual type of recession effects play out for young people,” he said, noting this was a continuation of a long-run trend that started after the GFC.

“That is, what happens during recessions is that the amount of new job creation slows down but the same number of people want to be in work.”

Professor Borland said young people would be disproportionately affected by this slowdown in job creation as they were overrepresented among the cohort of Australians looking to break into the labour market. The federal government has acknowledged the youth unemployment rate is much higher than the headline rate and has subsequently announced policies aimed directly at helping young people find jobs.

Asked whether these policies would help young people find work, Professor Borland said it was good the government had demonstrated an awareness of the challenges facing them.

But he said the policies would “bias what job creation is [already] happening towards young people” rather than encouraging businesses to take on additional staff. 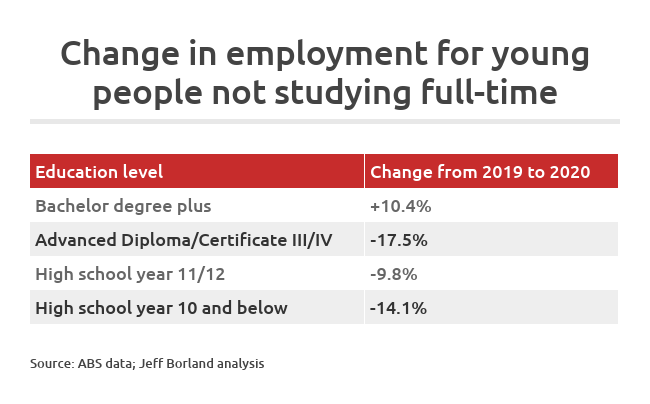 “What’s really important is that we keep worrying about the overall rate of job creation, because the best way to get young people back into work is through having a higher rate of growth in aggregate employment,” Professor Borland said.

“And that relies on overall fiscal stimulus and not withdrawing that too quickly.”

Professor Borland’s comments coincided with separate research from the University of Melbourne that found 46 per cent of people aged 18 to 34 were having difficulties paying for essential goods and services (“experiencing financial stress”) in March. 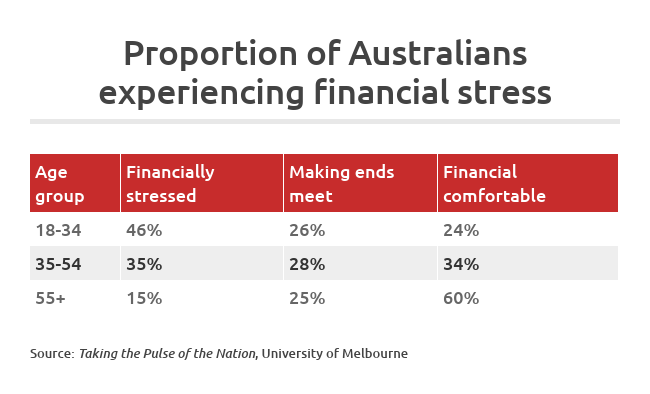 Released on Monday, the university’s Taking the Pulse of the Nation report found that financial stress among all Australians had risen to 31 per cent in March – up from 28 per cent in April.

Report author Professor Guay Lim said she believed the gradual removal of JobKeeper was the main driver of the increase in overall financial stress while a lack of job security helped explain why roughly half of self-employed Australians were suffering from mental distress.

The Australian Bureau of Statistics will release the results of its February labour force survey on Thursday. 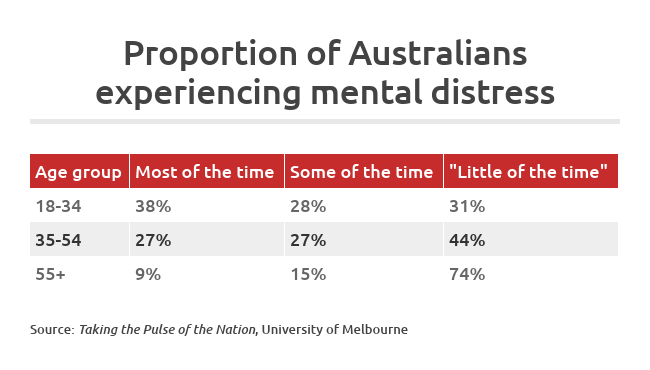