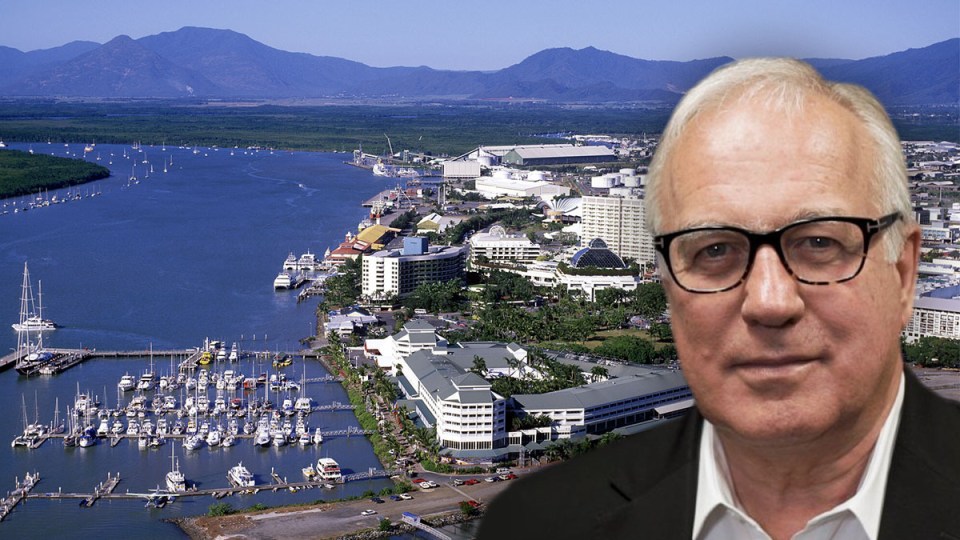 Cairns is in big trouble unless the government steps up to the plate, writes Alan Kohler. Photo: TND
analysis

Cairns is about to become a ghost town, at best a retirement village, and its fate is a test case for whether anyone gets left behind while the rest of us enjoy a booming recovery from the pandemic recession.

The far north Queensland town, gateway to the reef and the rainforest, is being kept alive by JobKeeper at the moment, but that ends on March 28.

Businesses in Cairns have already started giving staff their notice in preparation for that, and when the axe actually falls, the whole town will basically close.

Any of its 150,000 people not on a government pension will have to leave.

That’s because international tourism – Cairns’ only industry – has fallen 99 per cent, by government decree.

That is obviously hurting dozens of other places around the country, but Cairns is a special basket case because it’s too far to drive to and since there’s not much flying going on these days, it isn’t getting any domestic tourism either.

As the chairman of Tourism Tropical North Queensland, Ken Chapman, told me this week: “Cairns is basically an international destination within Australia.”

The question is not really whether to save Cairns and other places that rely on international tourism – of course they must be saved – but how to do it right.

The problem is that for them this is neither a short-term nor permanent closure; it’s something in between.

When the car industry closed, those workers had to find other work because it was never coming back.

We can argue about whether the industry should have been propped up, but it just wasn’t viable when the currency went to parity with the US dollar, driving down import prices.

The JobKeeper package of 2020 was meant as temporary employment support for businesses affected by last year’s lockdowns, like restaurants. It was brilliant policy, fast and effective, and now apart from Victoria’s encore this week the lockdowns are over.

But international tourists won’t be back for 12 months, and even then the return of tourism will be slow and unpredictable, and will depend on vaccination rates elsewhere.

Would two more years of support for businesses that serve international tourists be enough? Probably, but it’s hard to know.

The bean counters at Treasury are taking a hard line on JobKeeper, as Treasurer Josh Frydenberg revealed this week: “What Treasury have said in their review of JobKeeper is that if you leave it in when the economy strengthens as is occurring right now, it has a number of perverse or adverse incentives. It prevents the allocation of workers to more and better roles across the economy. It is expected to end in March, but what we saw in today’s numbers are very encouraging signs.”

It’s true that the numbers are encouraging: People relying on JobKeeper fell by 56 per cent in December, with 2.13 million employees “successfully graduating” from it in three months.

But that still leaves 1.54 million people relying on it, or 12 per cent of the workforce, and 22,000 of them in Cairns, which is about a third of the town’s workforce.

What’s more, the rest of the town’s workers – doctors, shopkeepers, taxi drivers – depend on those 22,000 staying in town, with money to spend.

One solution would be to keep JobKeeper going, but make businesses update their revenue figures monthly, so only those that need it still get it.

But a lot of businesses in all industries and regions do need to close and as Treasury says it would be wrong to keep zombie firms alive indefinitely. But if a business is in a two-year coma, do we turn off life support?

Dr Chapman owns the Skyrail Rainforest Cableway, which is currently running two days a week with very few customers. He’s keeping his 100 staff on with JobKeeper; when it finishes he’ll have to let them go and close the business.

Dr Chapman’s business is pretty much a zombie now, but when international tourism returns, it will be fine.

Should his 100 staff be paid by taxpayers to do little for two years, or should they – and Ken – go do something else for a while?

That seems to be what Treasury wants, but do what? And where?

If they go to Sydney or Melbourne to join the construction boom and build houses or do renovations, even if they could, Cairns would become a ghost town, or a retirement village.

To keep the town alive, tourism workers have to be paid to do something else in Cairns, even if there’s nothing there that’s commercially viable.

It seems to me, that means reviving a version of the Whitlam government’s RED scheme, which stands for Regional Employment Development, and was launched after the 1972-73 recession, lasting for two years until Malcolm Fraser killed it.

Workers were paid the minimum wage by government to build roads, youth centres, playing fields, swimming pools, senior citizens centres, surf lifesaving clubs and so on. The scheme was largely, but not entirely, funded by the Commonwealth, but run by state governments and local councils, who decided what infrastructure was needed.

Obviously, those sorts of numbers would be a drop in the 2021 bucket, so it would need to be bigger to replace JobKeeper in tourism towns.

But surely it’s better to pay the minimum wage ($758 per week) for people to do something useful than to keep paying $500 a week for them to turn up each day and play Solitaire on the computer at a dead company walking.

Alan Kohler: What’s to be done about post-JobKeeper Cairns?