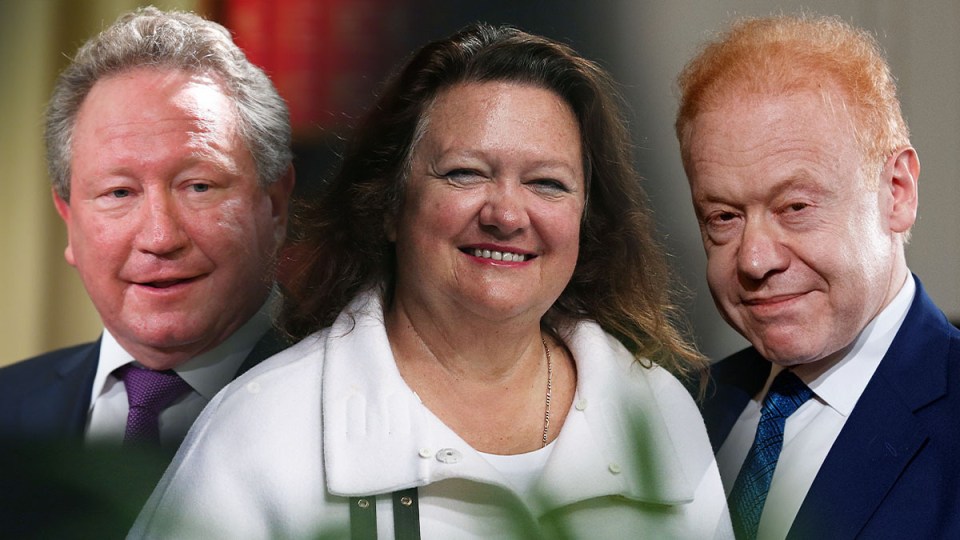 The richest Australians have gotten much, much richer over the course of the global coronavirus pandemic, with the top 200 increasing their wealth by an average of 24 per cent over the past year.

Gina Rinehart reclaims her crown as the nation’s wealthiest person with a net worth of $28.89 billion – up a staggering 109 per cent since 2019.

It was a similar trend for many on the Australian Financial Review Rich List.

Australia’s top 200 rich listers increased their collective worth by 24 per cent over the past year in spite of the virus crippling industry.

At one stage during the year, Andrew ‘Twiggy’ Forrest, the nation’s second-richest person, was adding $500 million a week to his fortune.

His personal worth rose from $7.99 billion to a mind-warping $23 billion this year – an increase of about 188 per cent in just 12 months.

He became Australia’s youngest billionaire in 2020 with a total valuation of $1.86 billion.

His 283 per cent surge in wealth was fuelled by the buy-now, pay-later giant’s listing on the Australian Stock Exchange in May.

The other major winners were the “ore-ligarch”.

These 12 Rich Listers with interests in West Australian mines more than doubled their net worth to nearly $80 billion collectively in a single year.

But there were less obvious beneficiaries too.

After Australia was declared drought-free and with cattle prices soaring, beef barons Trevor Lee and Dick Honan both became billionaires.

These are a little more obvious.

Flight Centre owners Graham Turner, Bill James and Geoff Harris all fell off the Rich List for the first time since the 1990s after the pandemic grounded all international travel and decimated the tourism sector.

Alan Rydge, who own heavily impacted businesses such as the Rydges, QT and Atura hotel chains, Event Cinemas and Thredbo Alpine Resort, watched his wealth plummet by $1.3 billion.

“It’s been one of the most turbulent years the Rich List team have ever encountered,” Rich List co-editor Julie-anne Sprague said.

“At the start of the pandemic many of the fortunes of the nation’s wealthiest were crumbling, but they have proven to be exceptional business builders. They have taken advantage of shifting demands within the economy, driving overall wealth to new highs.”

Australia now has seven billionaires in the “10-digit club” – the elite few with an individual net worth above $10 billion.

Australia’s richest five people (worth a collective $106.63 billion)
Follow Us