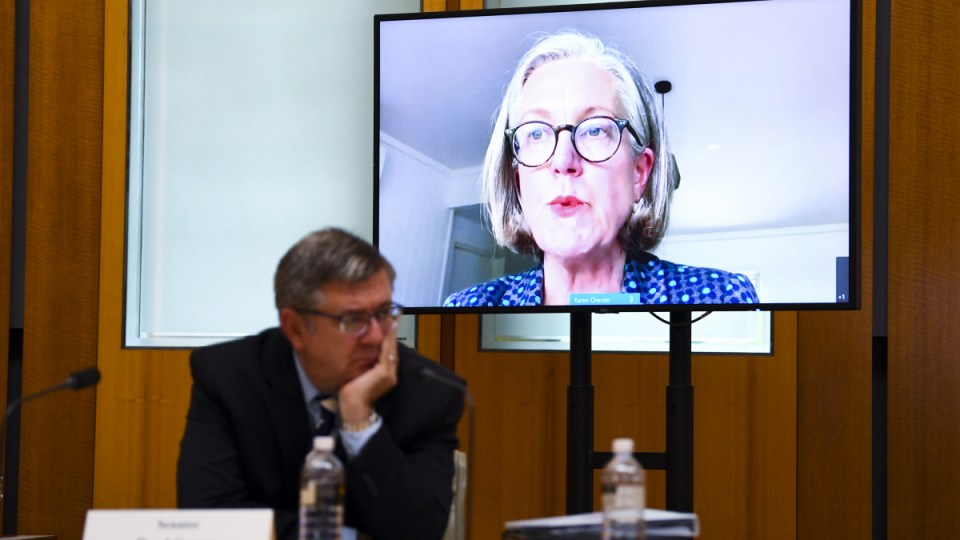 Karen Chester said ASIC commissioners were "not fully aware" of issues raised by the Auditor-General until September. Photo: AAP

Corporate regulator ASIC was told to examine rental expenses claimed by former deputy chair Daniel Crennan more than a year before their public disclosure cost him his job.

In a shock move on Monday, Mr Crennan resigned from his role as deputy chair after a Senate hearing last week revealed taxpayer funds were used to cover more than $70,000 in housing costs following his relocation from Melbourne to Sydney.

And, on Tuesday afternoon, it was confirmed that the Auditor-General had first raised concerns over the payments back in August 2019.

But “nothing was done about it,” Liberal senator James Paterson said.

Acting ASIC chair Karen Chester conceded during the Senate estimates hearing on Tuesday afternoon that “the delay in dealing with that matter is a failing”.

But she claimed the full leadership team at ASIC was “not fully aware” of the problems raised with Mr Crennan’s $750-a-week housing allowance or ASIC chair James Shipton’s $118,557 tax advice bill until September this year.

Her evidence suggested that Mr Shipton knew of the Auditor-General’s concerns for more than a year but only partially informed the rest of the leadership team.

“That was prior to the ANAO (Auditor-General’s) closing letter. There were then internal briefings of both the accountable authority (James Shipton) and Mr Crennan.

“There was then an ASIC submission that was prepared to go to the Remuneration Tribunal, [and] further briefings of the chair and Mr Crennan.”

“ASIC requested AGS to prepare a formal Remuneration Tribunal submission in May – now there was a significant delay there, but you might recall from March onwards there were matters of COVID-19 that had our chief legal office working on urgent matters.”

Senator Paterson welcomed Ms Chester’s explanation but questioned why ASIC kept paying a housing allowance to Mr Crennan after the Auditor-General had flagged it as inappropriate.

“It wasn’t until we were in receipt of final legal advice this year that Mr Crennan requested that the payments cease,” Ms Chester said.

“With respect Ms Chester, it shouldn’t be up to Mr Crennan to ask that the payments cease,” Senator Paterson replied.

Ms Chester effectively lay blame at the feet of Mr Shipton, who she said was receiving full pay while standing aside to make room for the investigation.

“I think you’re asking me a question that should be put to Mr Shipton,” she told Senator Paterson.

“I’ve explained the background, the context and the documentation, and the chronology as I understand it. But it’s fair to say that we did not have a full information set.”

The acting chairman later clarified, however, that ASIC commissioners had been “verbally briefed” last year “that there was a matter with respect to Mr Crennan’s relocation payments”.

“We did not know that it was rental payments,” she said.

“We asked about what the amount of money was. We were told it was relocation payments and checks had to be made with the Remuneration Tribunal.”

The ASIC revelations came just days after it emerged that Australia Post had spent nearly $20,000 on Cartier watches for senior employees – prompting independent MP Helen Haines to launch a renewed push for a federal anti-corruption commission.