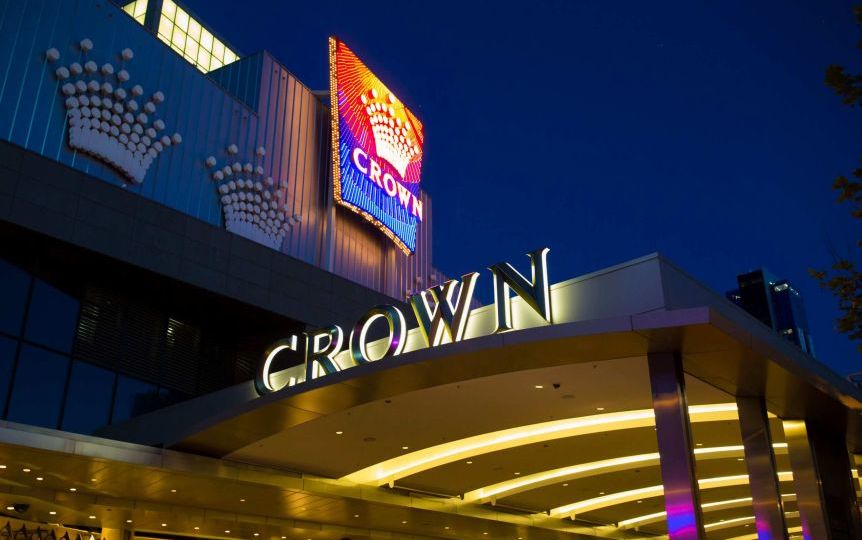 Crown Casino is facing a barrage of questions from shareholders at Thursday's annual general meeting over its corporate governance failures. Photo: ABC News

Crown Resorts has received a ‘first strike’ against its remuneration report, with more than 34 per cent of shareholders voting against the resolution.

A first strike occurs when a company’s remuneration report, which outlines each director’s individual salary and bonus, receives a ‘no’ vote of 25 per cent or more by shareholders at its annual general meeting.

As expected, Crown’s directors faced major protest votes from its shareholders but they were saved by votes from billionaire major shareholder James Packer, who has a 36 per cent shareholding.

Chairwoman Helen Coonan said if the remuneration report fails again at next year’s meeting it could trigger a spill of all board positions.

Director John Horvath was re-elected — but acknowledged he would not have survived without the supportive votes of Mr Packer — and therefore said he would retire.

Director Jane Halton is in the same position but has said she will stay despite initially considering stepping down.

Shareholder discontent has heightened as the company faces a probe by financial regulator AUSTRAC over potential breaches of Australia’s anti-money laundering and counterterrorism financing laws at its flagship Melbourne casino.

Many of these failings have been dissected in recent weeks at the NSW Independent Liquor and Gaming Authority inquiry into Crown, which is due to hand down its findings in February.

Let me say clearly that I unreservedly apologise for these failings,” Ms Coonan said.

‘It was never my intention to mislead’: CEO

Crown Resorts chief executive Ken Barton also apologised to shareholders for not telling them at last year’s meeting about special briefings to Mr Packer, despite being asked a specific question about it.

During the NSW Inquiry, Mr Barton admitted he did not tell other shareholders about a special deal to provide daily updates on the company’s financial performance to Mr Packer.

Mr Barton said he had not told a shareholder these briefings were occurring when directly asked about the level of information being shared with Mr Packer last year.

“I note my answer to a particular question asked of me by a shareholder at last year’s AGM regarding information provided to Mr Packer,” Mr Barton said during his AGM speech on Thursday.

“I answered that question with reference to information provided to Crown’s shareholder CPH under a services agreement, the existence of which had already been publicly disclosed.

“As has been discussed through the course of the inquiry, there was another confidential arrangement that specifically related to information sharing with Mr Packer.

“It was never my intention to mislead or provide a ‘non-answer’ in response to this question.

“My intention was simply to answer the question within the realms of information available to me that was in the public domain.

“In hindsight, I recognise that my response was not a complete answer to that question, and I could have chosen a clearer way to answer this question.

“I apologise for this.”

Ms Coonan said she had confidence in Mr Barton’s capacity to carry out his new role.

“He’s demonstrated a recognition of the board’s need for change,” she said.

I very much don’t accept the contention of the question that Mr Barton should exit.”

Ms Coonan told shareholders the company is facing adversity like never before, with the inquiry by the liquor and gaming authority raising serious concerns.

“The impact of COVID-19 on our resorts and the tourism industry has been devastating, and we had to make the difficult decision to stand down thousands of our wonderful employees,” she said.

“The inquiry currently being conducted by the Independent Liquor and Gaming Authority in New South Wales has raised serious and important issues.

In all of its history, Crown has never faced adversity like we are now — but I’d like to reassure all our investors, stakeholders and staff that the board is determined and willing to learn from the past.”

“We are undertaking tough and wide-ranging reforms to our management, structures, policies, procedures and culture to ensure we respond to these challenges and emerge a stronger and better organisation for it.”

She said it “reflects dissatisfaction with the performance of the board and the company, particularly in the context of evidence coming out of the ILGA Inquiry”.

Shareholders have given a clear and powerful message that board renewal is required, and the board accepts this feedback,” Ms Coonan said.

“Changes will be made.”

The casino’s VIP clients, being brought in to gamble at its Perth and Melbourne casinos by private junket operators, have long been associated with Asian organised crime elements.

To counter the risk that the company will continue to be exposed to criminal elements, it has suspended relationships with all junket operators until June next year.

Ms Coonan said if the casino resumes junkets, it would be with the backing of the regulator and far greater risk governance.

There’s a long way to go before Crown would consider re-engaging with junkets,” she said.

Ms Coonan had told the NSW Inquiry she had not seen the 60 Minutes or ABC 4 Corners programs alleging money-laundering, on-site drug use and links to criminal gangs.

She told an angry shareholder: “I don’t accept they’ve been shocking revelations … they’ve been historical shortcomings”.

Ms Coonan also rejected shareholder questions that alluded there had been money laundered through its casinos.

Ms Coonan was also asked by shareholders about Crown’s former chairman Robert Rankin, who will likely be referred to ASIC for a string of breaches linked to his time at the gaming giant.

Mr Rankin spent several years at the helm of the company until his resignation in 2017.

The NSW inquiry heard he is facing a number of allegations over the failure to inform the Crown board over serious issues within the company.

Ms Coonan said she has not seen Mr Rankin since he left the company and “my understanding is Mr Rankin… doesn’t reside in Australia”.

“The inquiry has ceased with this matter and I don’t think it would be appropriate for me to make any official comment,” Ms Coonan said.

Crown Resorts also announced it would also end its deals with the private firm of Mr Packer after the agreements were heavily criticised in the inquiry.

On Wednesday evening, the company said in a statement it had terminated a services agreement with Mr Packer’s Consolidated Press Holdings that has been in place since July 2016, and a controlling shareholder protocol that was set up in October 2018.