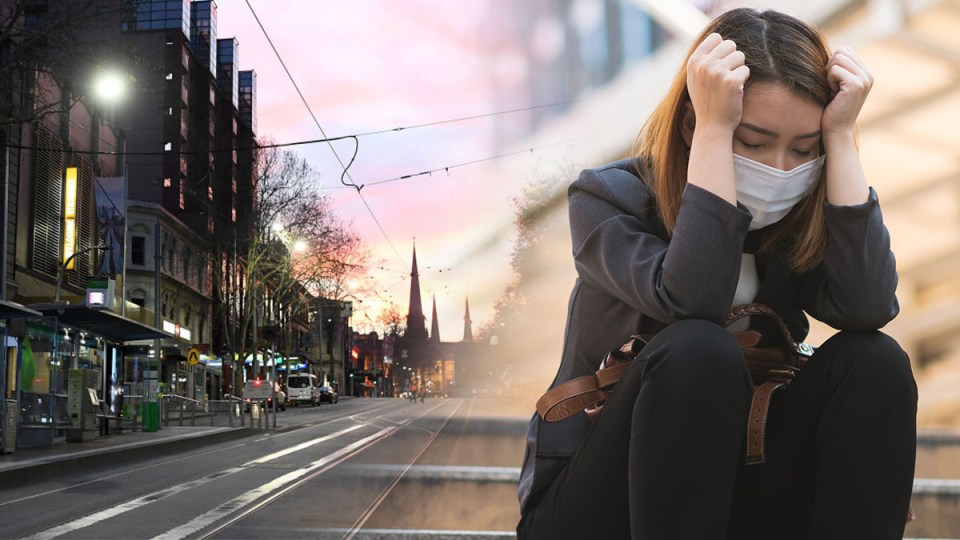 New data shows the economic recovery has run out of steam. Photo: TND

New figures show 115,000 jobs have been lost since the federal government slashed the rate of JobKeeper.

Figures released by the Australian Bureau of Statistics on Tuesday reveal the number of payroll jobs in Australia fell by 0.9 per cent over the two weeks to October 3.

Based on a rough extrapolation of ABS labour force data, that means businesses shed 113,147 jobs after the federal government cut the fortnightly JobKeeper payment from $1500 to $1200 for full-time workers and $1500 to $750 for part-time workers.

The Coalition says the economic recovery from COVID-19 is already underway and strong enough to withstand cuts to income support.

Such optimism underpinned the Treasurer’s decision in the federal budget to back business to lift the economy out of recession rather than announcing more direct government spending.

But the latest data suggests the gamble might not pay off. 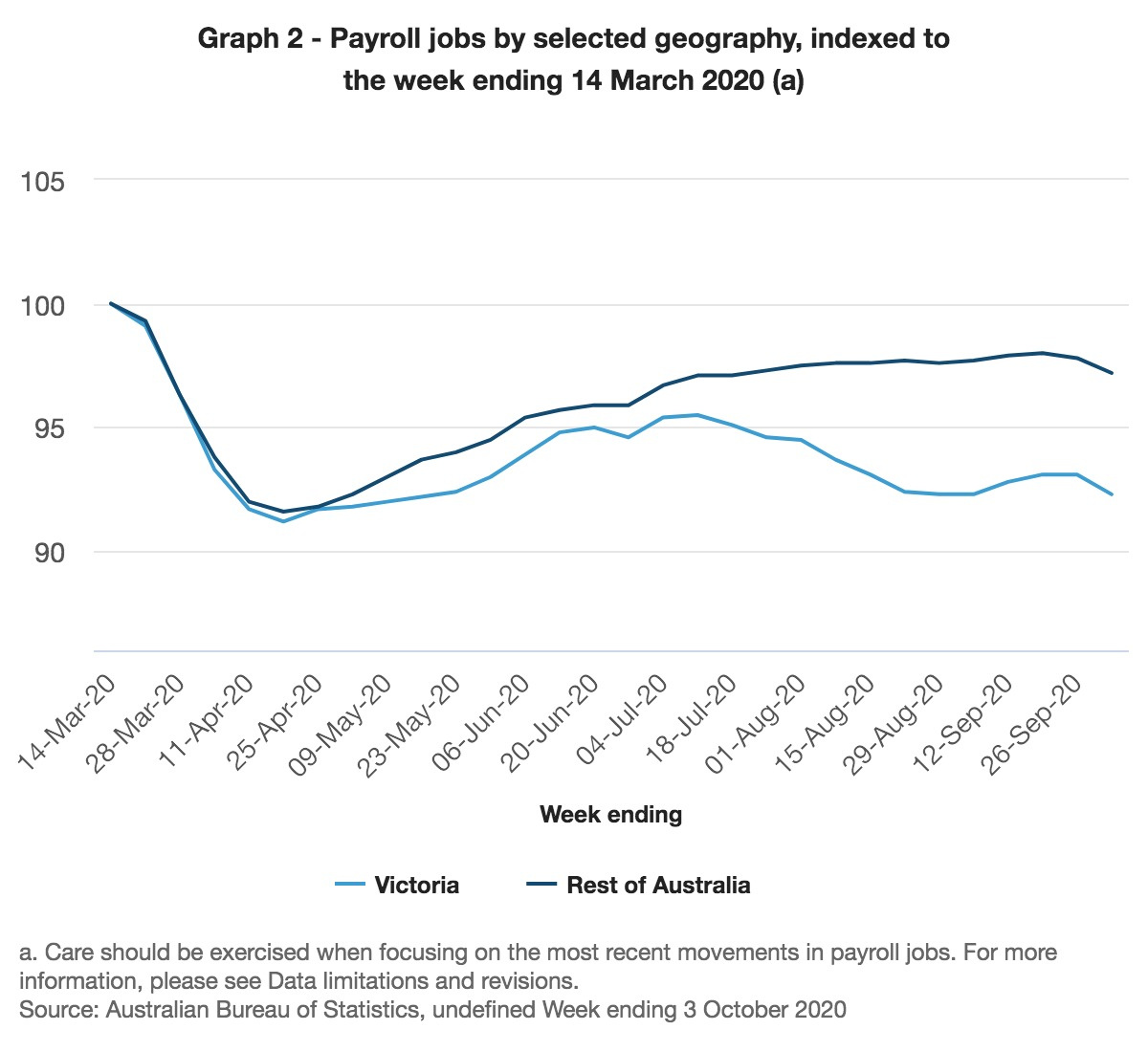 “What we’re seeing in the figures is primarily JobKeeper-related. It’s people who were considered employed under JobKeeper but now JobKeeper has [been reduced] they’ve effectively lost their jobs,” said Angela Jackson, lead economist at Equity Economics.

Ms Jackson said the jobs market recovery ran out of steam months ago and “a lot of effort” was required to create new jobs.

“Looking forward, the loss of job momentum raises concern that the cyclical downturn is still to come,” she wrote in a note.

“The Federal Budget asked Australians to ‘Spend for your Country’. There is a question mark over whether households will do that in the face of a weaker labour market.”

The latest ABS data shows that over the fortnight to October 3 business owners cut jobs in every state – not just Victoria – and across all industries bar hospitality, financial services, and education and training.

That means businesses have 440,000 fewer jobs on their payrolls today than on March 14.

Commonwealth Bank associate economist Nicholas Guesnon said the results were “disappointing” and coincided with a rise in the number of people receiving the unemployment benefit JobSeeker.

But he said a gradual easing of restrictions in Victoria combined with stimulus measures included in the budget would give the economy a major lift. 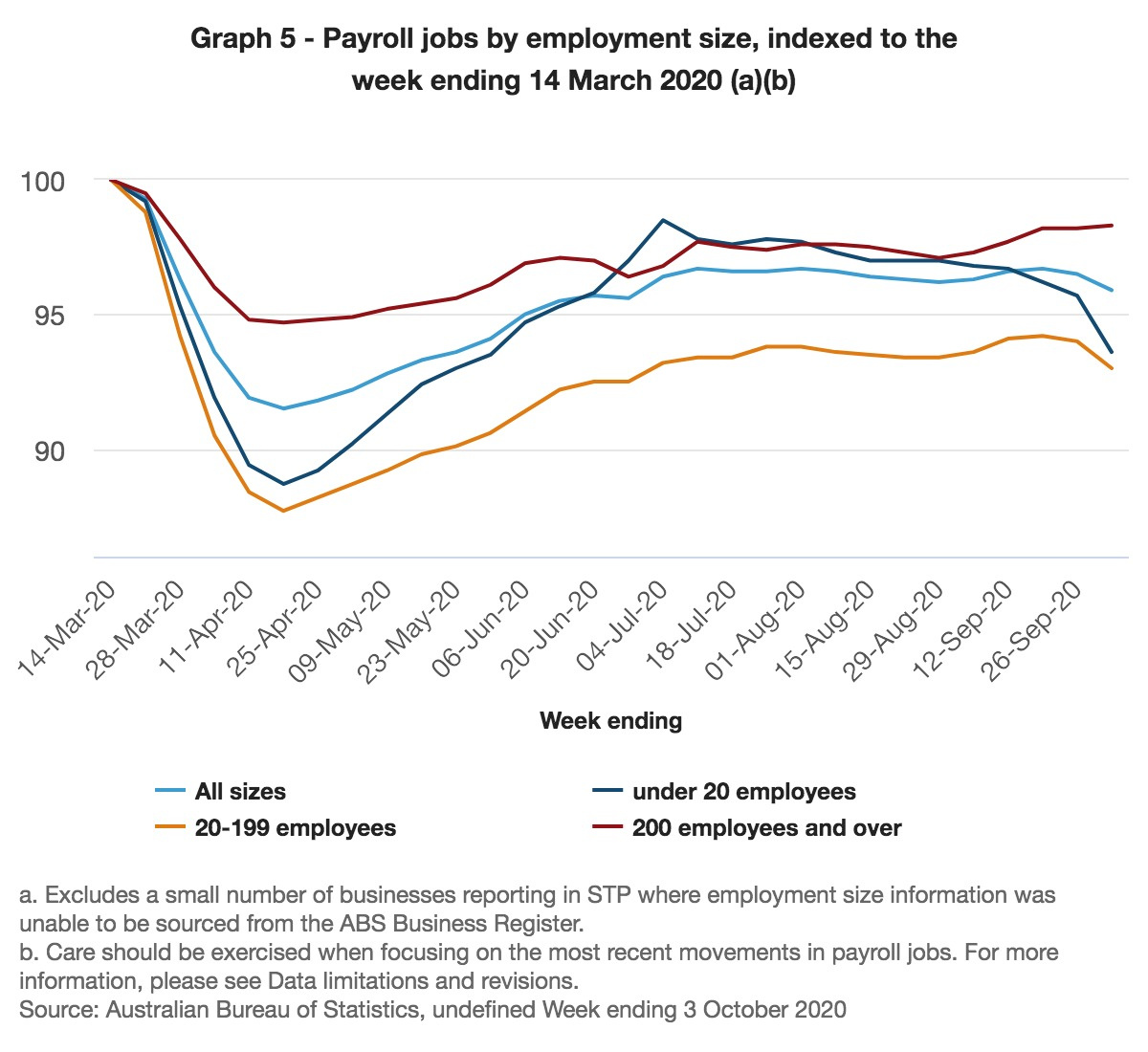 “And the RBA also looks set to ease monetary policy further at the upcoming November meeting.”

The ABS data comes after Reserve Bank governor Philip Lowe told a Citi bank conference last week that further cuts to interest rates would have a greater stimulatory impact now the economy was starting to reopen.

“When the pandemic was at its worst and there were severe restrictions on activity we judged that there was little to be gained from further monetary easing,” he told the conference.

“The solutions to the problems the country faced lay elsewhere. As the economy opens up, though, it is reasonable to expect that further monetary easing would get more traction than was the case earlier.”

Economists at ANZ bank inferred from his speech that the RBA will cut the official cash rate to 0.1 per cent at its next meeting on November 3.

As of the time of writing, financial markets put the chance of an interest rate cut on Melbourne Cup day at 73 per cent.