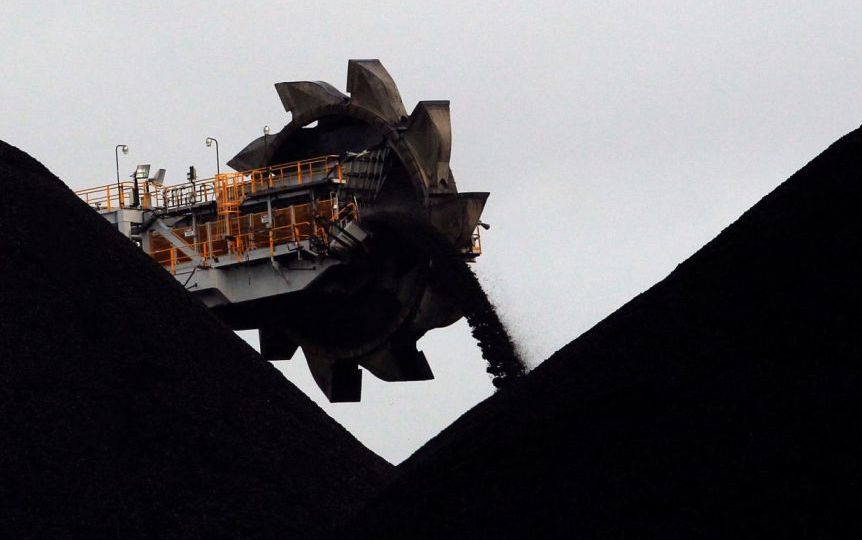 China has already received less coal from Australia than usual over the past month. Photo: Reuters

BHP has confirmed that Chinese customers have asked for deferrals of their coal orders amid reports that China has stopped taking shipments of Australian coal.

The company’s chairman Ken MacKenzie told reporters after BHP’s annual general meeting (AGM) that some coal exports had been stalled.

“We understand there may be some new developments relating to how China plans and moderates imports versus its own domestic coal production,” he said.

“Our commercial team has recently received deferment requests from some of our Chinese customers.”

Economic analysis firm IHS Markit said some Chinese ports had been told not to accept Australian coal and those shipments were being sold to other countries at the last minute.

The Federal Government is investigating the reports of a possible import ban on Australian coal amid trade tensions between Canberra and Beijing.

Mr MacKenzie said BHP had longstanding relationships with its Chinese customers and it was “working hard to understand the situation more comprehensively”.

“It would be concerning if the rumours are true regarding import restrictions for Australian coal in China.”

Coal exports have been delayed into Chinese ports in the past.

Coal is the latest export to be caught up in trade tensions between Australia and its biggest trading, China.

China has imposed trade duties on Australian barley and beef exports and wine exports are now also the subject of an anti-dumping investigation.

A major point of tension has been Australia’s banning of Chinese telecommunications firm Huawei from being involved the rollout of 5G mobile infrastructure over national security concerns.

Mr Morrison’s call for an investigation into the origins of the COVID-19 pandemic, believed to have originated in the Chinese city of Wuhan, has also damaged relations.

At the AGM, BHP chief executive Mike Henry said the impact of COVID-19 made the outlook for commodities uncertain.

“However, the strength and consistency of the economic recovery underway in China does provide a measure of confidence and optimism,” he said.

He slammed Rio Tinto for the destruction of 46,000-year-old rock shelters at Juukan Gorge in the Pilbara in Western Australia saying it was a “tragedy.”

“It was a loss of unique cultural heritage, but it was also a loss of trust,” he said.

“It’s had an impact across the industry as a whole.”

He said BHP would not act on state approvals to blast 40 heritage sites to expand the South Flank iron mine in the Pilbara without consultation with the Banjima traditional owners.

The Australasian Centre for Corporate Responsibility withdrew a shareholder resolution calling for a moratorium by BHP on the destruction of indigenous sites.

That is after Mr MacKenzie met with traditional owners and the First Nations Heritage Protection Alliance, and BHP agreed to a set of principles to manage cultural heritage.

“We have been heartened by the constructive approach BHP has adopted to our discussions,” Mr Muir said.

“Together we are determined to drive industry reform and legislative change that improves both agreement making and the protection of Aboriginal cultural heritage, which is of immense value to all Australians.”