Treasurer Josh Frydenberg has kept the door open to fast-tracking $158 billion of income tax cuts to help the economy recover from its worst quarter on record.

Mr Frydenberg told reporters in Canberra on Wednesday the government was “considering the timing” of the tax cuts and would reveal any announcements in the Budget on October 6.

The Treasurer said during a press conference that his economic rebuilding plans were centred on $10 billion of fast-tracked infrastructure projects, industrial relations reforms, cuts to red tape, investment incentives, and free short courses for 341,000 new trainees.

It came after the Australian Bureau of Statistics released data showing the economy had shrunk by a whopping 7 per cent in the three months to June 30 – the largest quarterly fall since records began in 1959.

Although retailers like JB Hi-Fi and Temple & Webster profited from Australians improving their homes and equipping home offices, the prevailing picture in the data was of an economy put into hibernation. 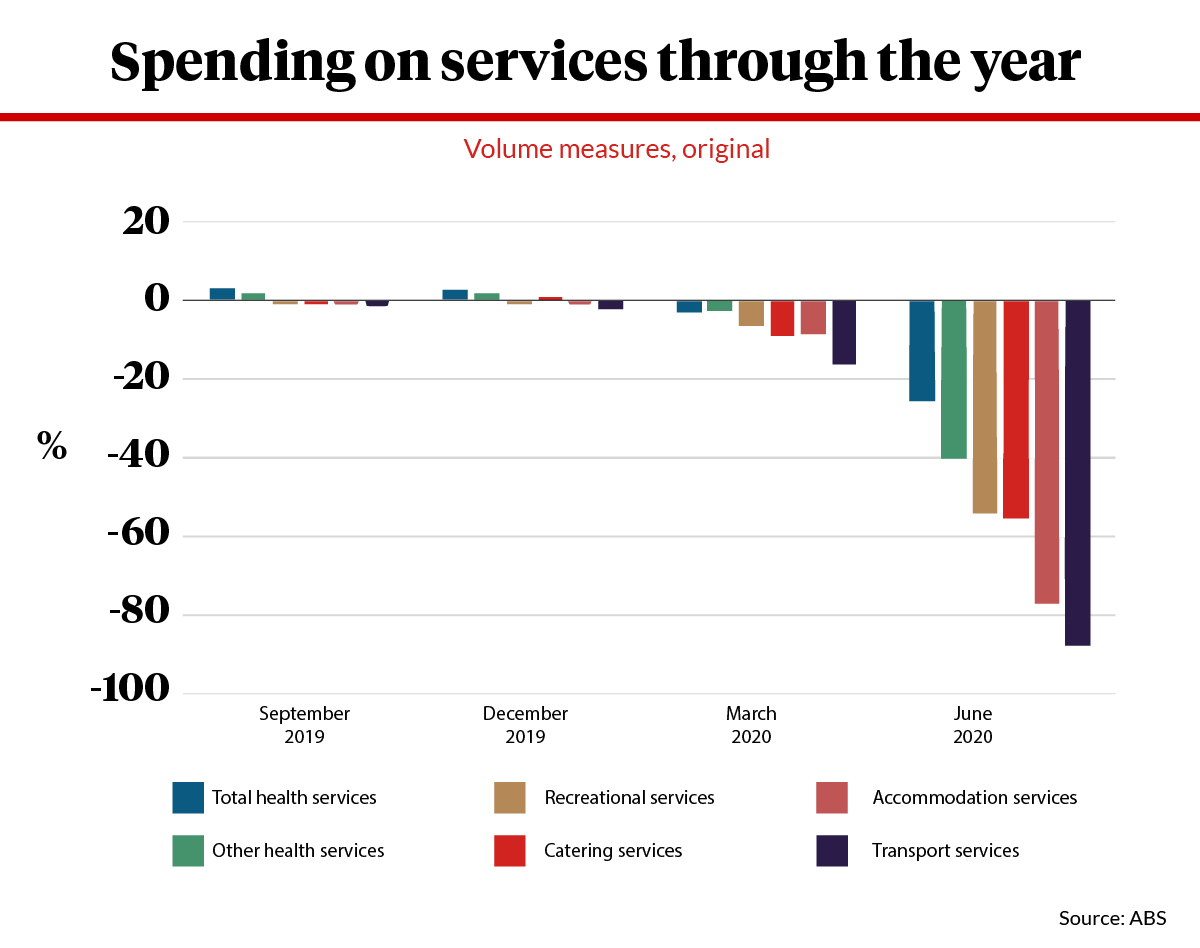 Household consumption fell by a record 12.1 per cent over the quarter, and consequently detracted 6.7 percentage points from the headline growth figure.

This was mainly because spending on services plunged 17.6 per cent as governments shut down cinemas and events and restricted restaurants to takeaway.

Spending on goods, meanwhile, fell by 2.8 per cent.

And even more worrying was the household saving to income ratio, which rose from 6 per cent to 19.8 per cent, its highest rate since June 1974.

Although it’s unclear how much of this was driven by weak consumer confidence and how much by a lack of spending opportunities, economists said it nonetheless suggested that income tax cuts would do little for the economy.

But the need for more stimulus is undeniable. Indeed APAC economist Callam Pickering said tax cuts were a politically easy sell but would fail to create jobs and stimulate the economy – “largely because those cuts accrue to the already well-off”.

“Property sector policies, such as first-home owner grants, also tend to achieve nothing but are often rolled out in a crisis.”

Mr Pickering said the magnitude of the economic shock meant the government had to “show some ambition” in the October budget and look beyond its “obsession with running a surplus”.

The federal government can borrow at an interest rate of effectively nothing,” he said.

“Nation-building projects should be on the agenda as a way to not only create jobs but also boost productivity.”

SGS Economics and Planning principal Terry Rawnsley also backed more infrastructure spending, noting that tax cuts and cash handouts would do little to help, as consumers have limited opportunities to spend their money.

He told The New Daily the government should instead spend on “lots of medium-sized [infrastructure] projects, public housing, and infrastructure that we need for our cities to keep the economy ticking along”.

“The danger is that if you give money to people, they might save it … but if you’re building roads, public space, public housing, then you know that money is hitting the economy,” Mr Rawnsley said.

“You don’t have to worry about it being saved away by households. You know you’re going to get the biggest bang for your buck.”