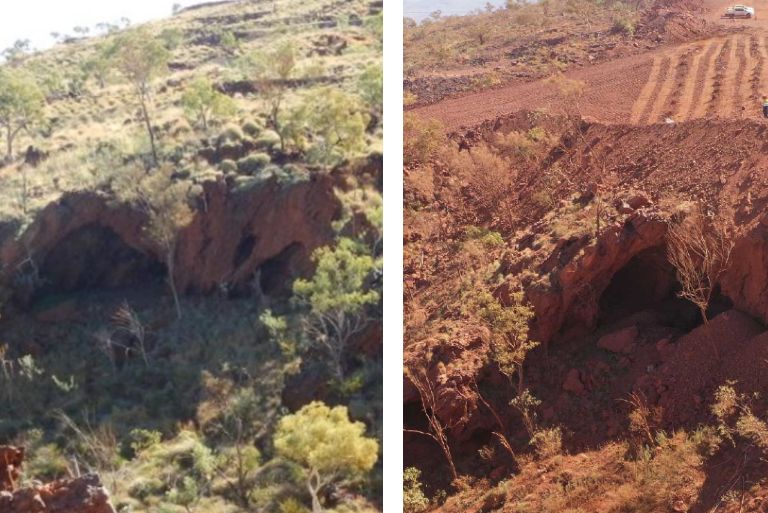 Juukan Gorge in 2013 and in 2020 after the land was cleared. Photo: Puutu Kunti Kurrama And Pinikura Aboriginal Corporation, ABC News

A Rio Tinto board review into the loss of the ancient rock shelters has blamed flaws in systems, data sharing, Indigenous engagement and decision making, after the caves were blasted to allow for an expansion of the Brockman 4 mine.

The company detonated explosives near the culturally significant rock shelters in May, destroying them in the process.

The cave sites were among the oldest in Australia with evidence of continuous human habitation going back 46,000 years.

The destruction was legal under the section 18 exemption to WA’s Aboriginal Heritage Act, which is currently being reformed.

It gave Rio Tinto access to an extra eight million tonnes of high-grade iron ore, estimated at the time to be worth $135 million.

But the company’s review found while it had obtained legal authority for the blasts, it fell short of the standards and internal guidance Rio Tinto set for itself, over and above its legal obligations.

It found the company failed to properly engage with the Puutu Kunti Kurrama people (PKKP).

Mr Jacques and two other senior executives will lose their annual performance bonuses as a result of the findings.

As well as not receiving a performance-related bonus, the board decided Mr Jacques’ long-term incentive plan award, due to vest in the first half of 2021, would be reduced by $1.83 million.

The total losses for the chief executive alone total $4.9 million.

The board review found there was “no single root cause or error that directly resulted in the destruction of the rockshelters”.

“It was the result of a series of decisions, actions and omissions over an extended period of time, underpinned by flaws in systems, data sharing, engagement within the company and with the PKKP, and poor decision-making,” it said.

Earlier this month, Rio Tinto admitted it did not tell traditional owners there were four options for blasting at Juukan Gorge, three of which did not involve the destruction of highly significant ancient rock shelters.

In a statement on Monday, Rio Tinto chairman Simon Thompson said the review provided a clear framework for change.

“We will implement important new measures and governance to ensure we do not repeat what happened at Juukan Gorge and we will continue our work to rebuild trust with the Puutu Kunti Kurrama and Pinikura people,” he said.

“We fully recognise traditional owners must be treated as equal partners which includes regular, open and respectful dialogue.

“We look forward to continuing our engagement with the PKKP on a joint initiative to learn the lessons from Juukan and to strengthen our partnership.”

The review was conducted by Michael L’Estrange, an independent non-executive Rio Tinto director.

He said the company was focused on preventing any similar incidents and repairing its relationship with the traditional owners.

“We understand the damage. We deeply regret it. We want to rebuild it and this is going to take a long time,” he said.

“But we are very keen to do so and we look forward to working with the PKKP traditional owners.”

It said it would be “strengthening communities and heritage systems, processes and teams within operations to ensure that heritage issues are accorded equivalent priority alongside safety and operational performance”.

“This includes improved processes for escalating heritage issues to more senior decision-making levels and the need for a greater prioritisation of partnerships and relationships with Traditional Owners and First Nations people from senior operational leaders and teams,” the review said.

It pledged to strengthen Rio’s audit capability “through the introduction of more effective internal audits to ensure conformance with Rio Tinto and independent international heritage standards and guidelines”.

It also said it would strengthen board oversight and assurance to enhance governance and overall accountability.

Mr Thompson said no single individual or error was responsible for the destruction of the Juukan rock shelters.

“But there were numerous missed opportunities over almost a decade and the company failed to uphold one of Rio Tinto’s core values – respect for local communities and for their heritage,” he said.

“We are determined to learn, improve and rebuild trust across various internal and external partners.

“I look forward to working with [Jean-Sebastien], Chris and Simone to drive change and improvements in order to re-establish Rio Tinto’s credentials and strengthen heritage management across the business.”

WA Premier Mark McGowan said the destruction of the gorges had led to a lot of consideration by mining companies of their internal practices.

“It was obviously a tragic and unfortunate situation,” Mr McGowan said.

“Our focus is not on undoing the past. Our focus is on coming forward with important new Aboriginal heritage laws that make sure the interests of Aboriginal people, our history and heritage and the broader community, are taken account of.”

He said the new laws would “hopefully resolve these issues once and for all”.

Executives from the company told a federal parliamentary inquiry investigating Rio Tinto’s destruction of the rock shelters that senior executives were only made aware of its significant issues more than a week after tonnes of explosives were already laid in the area comprising the Brockman 4 mine and were unable to be removed.

The inquiry heard senior executives only became aware of the issue on May 21, and were not aware of the area’s high cultural significance until then.

This was despite a number of archaeological reports funded by the company since 2013.

The hearing was told “the point of no return” for the blasting was May 13 when hundreds of charges were laid at the site.

In a statement at the time, PKKP spokesman Burchell Hayes said Rio Tinto’s submission to the inquiry had “only served to deepen the anguish” of the traditional owners.

“We are deeply hurt and traumatised by the desecration of a site which is incredibly significant to us and to future generations,” Mr Hayes said.

“Rio Tinto’s submission to the parliamentary inquiry has deepened our hurt as we understand the true extent of the dysfunctional process which led to this desecration and has belittled our heritage.

“The information tabled to date leads us to question the foundations of our relationship with Rio Tinto.

“In particular, we regret the lack of value being attached to the land we had entrusted to them, beyond short-term financial gains.”