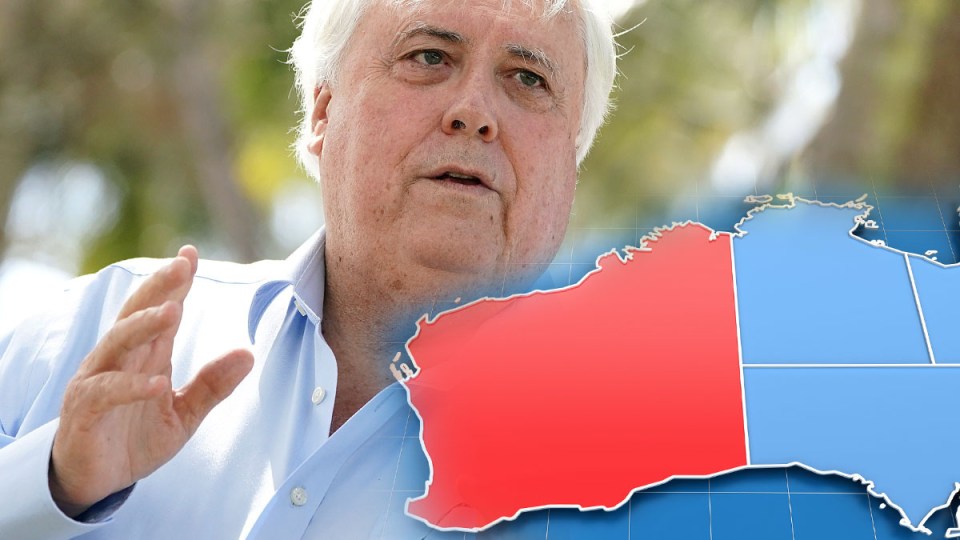 Clive Palmer is no stranger to the Australian court system. And as history reveals, he’s done quite well there, too.

But this time, the outspoken and often controversial businessman’s latest legal action risks bankrupting the state of Western Australia.

During a pandemic, no less.

The WA government rushed emergency legislation into state parliament late on Tuesday in a bid to protect itself from a $30 billion claim over decisions by former premier Colin Barnett.

Eight years on, the man who arguably put Scott Morrison back into The Lodge with his $60 million advertising spend in the 2019 election now wants recompense for the fact he couldn’t develop the Pilbara iron ore mine and sell it to Chinese companies.

But the government’s hopes of passing the bill on Thursday could be dashed after the Liberal opposition argued it should be scrutinised by a select committee.

The government does not have a majority in the upper house, unlike the lower house which signed off on the legislation on Wednesday night.

“The claims which are being made against the state … amount to nearly $30 billion,” Mr Quigley told state parliament.

The claim is equal to every Western Australian paying Mr Palmer more than $12,000, Mr Quigley added.

He said the action comes at a time “when the people of Western Australia are in the most need of our public money”.

There is nothing Mr Palmer appears to enjoy more than a good blue in court and he has told WA he will take it to the High Court if it enacts the legislation introduced on Tuesday evening.

He has also brought High Court action against WA’s COVID-19 border closure, which Mr Quigley noted that Mr Palmer had referred to as a “media beat-up”.

That action is based on his belief that the border restrictions are preventing his Mineralogy group officers from attending mediation over another legal fight with the state over his iron ore dealings. 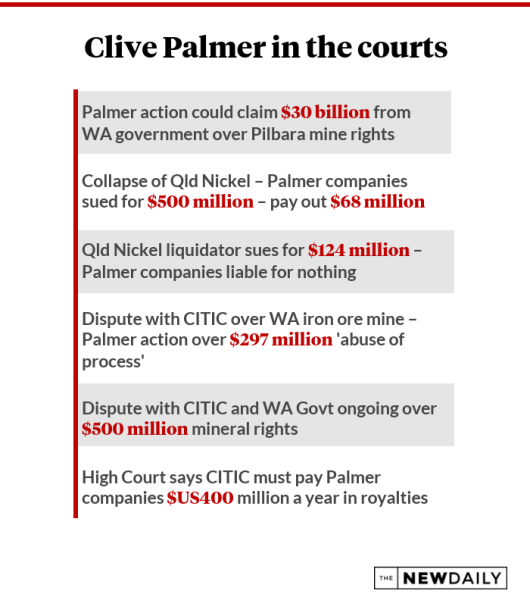 “In 1988, Bob Hawke took to a referendum measures that would have allowed legal action against states, taking action damaging property rights, but it lost by a margin of 75 per cent,” he said.

Had it gone through, it would have allowed Mr Palmer to use the “Castle principle”, where the main protagonist in the iconic film The Castle, Darryl Kerrigan, was able to overturn Commonwealth action to take over his home to expand the airport.

But no one should take court action against Mr Palmer lightly as he has had some remarkable victories in recent times.

Following the collapse of his Queensland Nickel refinery business in Townsville in 2016, liquidators and others took action against him for recompense of $500 million.

The case was eventually settled with Mr Palmer paying out $68 million and a liquidator getting nothing on a claim of $124 million.

Then there is his ongoing dispute with Chinese group CITIC and the WA government over $500 million in rights over a jointly held iron ore mine.

Although the mine is in operation, in February a Supreme Court judge threw out Mr Palmer’s attempt to claw back $297 million in revenues from CITIC as an “abuse of process”.

However, in the same week, the High Court upheld his rights to claim $US100 million ($140 million) in royalties from CITIC every three months.

Taking nothing for granted

Recognising that he is dealing with a tough customer, Mr Quigley told parliament “the McGowan government is not prepared to risk the financial consequences to the state of an adverse arbitral award, and one where the state of Western Australia and taxpayers could be exposed to billions of dollars. To do so would be fiscally irresponsible”.

Consequently, the government will act to protect itself “from the rapacious nature of Mr Palmer, Mineralogy and International Minerals,” Mr Quigley said.

A series of mediations over the issue carried out by former High Court judge Michael McHugh delivered findings partly in Mineralogy’s favour, but Mr Palmer failed to act on them from 2014.

As a result, the government told him in 2017 that his applications had lapsed, Mr Quigley said.

King of the court: Why Clive Palmer’s $30 billion fight has WA worried