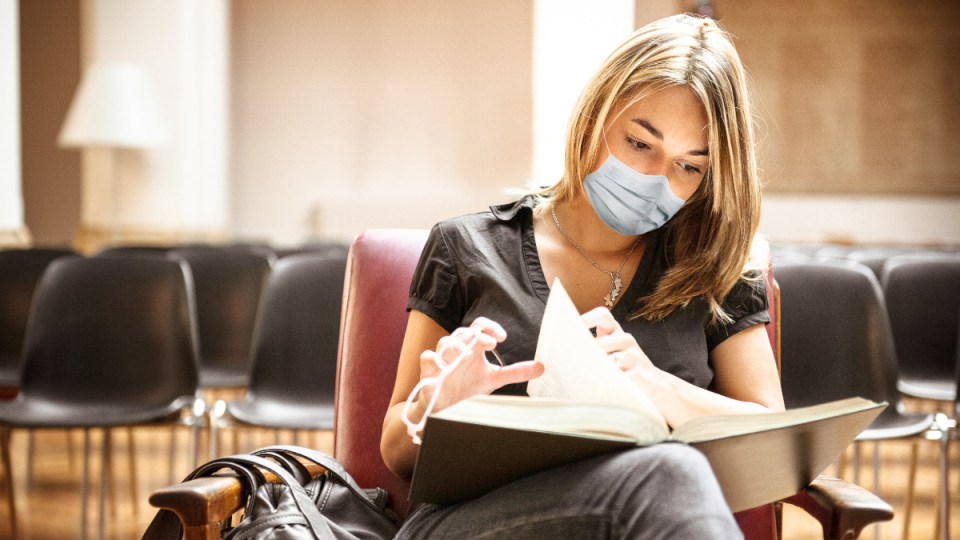 Universities could lose 30,000 jobs as the pandemic slashes their income. Photo: Getty

University workers are bracing for more than 30,000 job losses as the coronavirus devastates foreign student enrolments.

But National Tertiary Education Union president Alison Barnes said “that 21,000 figure doesn’t include casuals, many of whom were let go as soon as the pandemic hit”.

It comes after Prime Minister Scott Morrison announced a $2 billion funding package for vocational education but ignored universities, which are ineligible for JobKeeper as most have not suffered a large enough fall in revenue.

When questioned about the lack of JobKeeper support for universities by journalist Leigh Sales on ABC’s 7.30 program, Mr Morrison said universities were private businesses that have large cash reserves and pay their CEOs millions of dollars every year.

He said other large corporates have been encouraged to draw on their reserves to keep people in jobs during this time, noting the government had maintained the same level of Commonwealth Grant Scheme (CGS) and HELP funding payments for universities, despite a projected drop in student enrolments.

Universities are getting support but they’re “just not getting a special deal,” he said.

On top of the 30,000 projected job losses in universities, Ms Barnes said there are even more casual academics who have lost jobs in the private English language and vocational sectors, which are built on foreign students.

But estimating potential job losses in these sectors is impossible, she said. 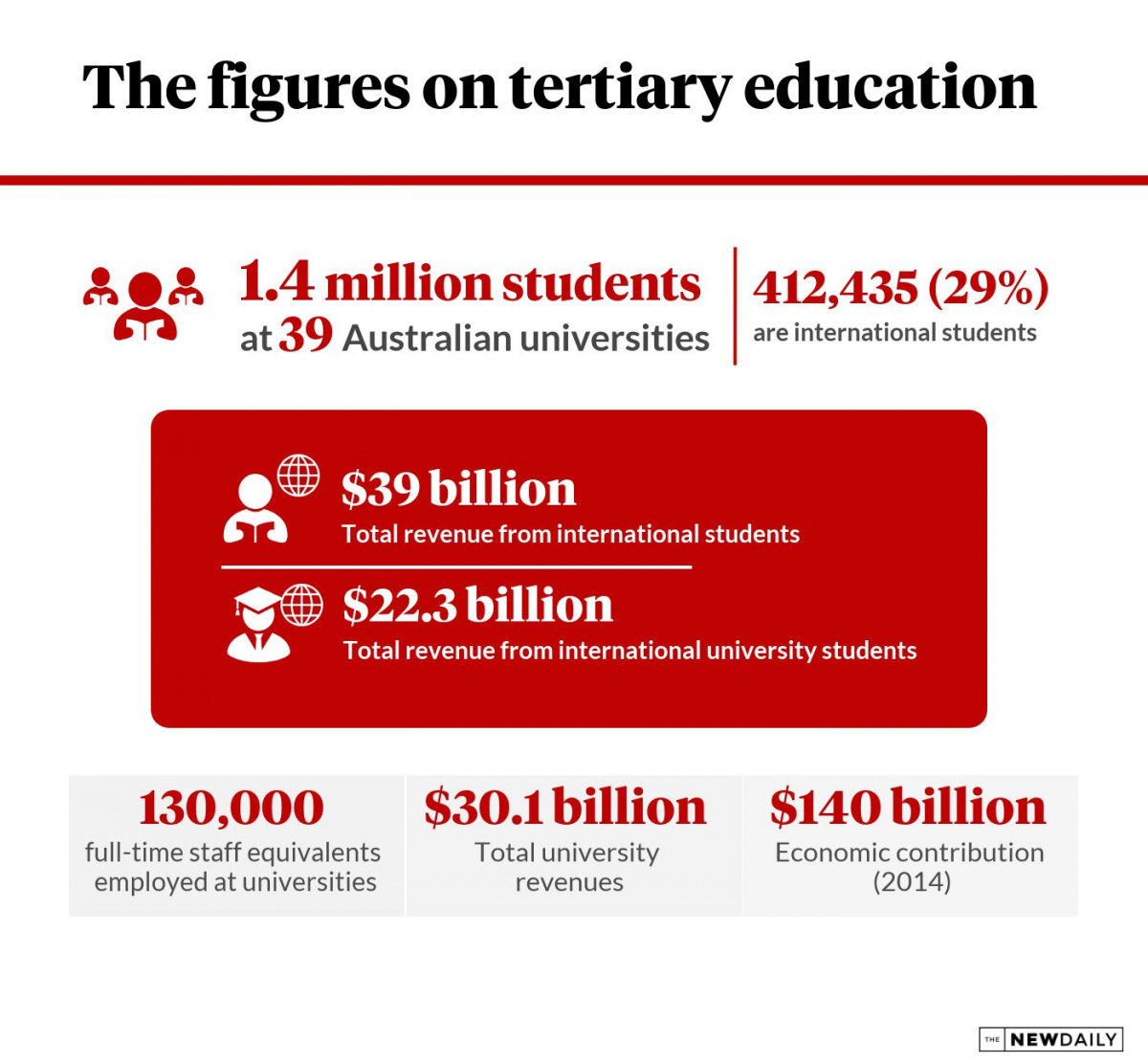 Official figures put university staff numbers at 130,000 full-time positions. But the trouble with that is that many are not full time.

“It’s very hard to know how many staff are casuals, but we think it might be 50 per cent of all university teaching positions,” Dr Barnes said. Other estimates put the figure as high as 70 per cent.

That means that women are far more likely to lose jobs than men.

The boom in foreign student numbers in recent years has put education exports at No.4 on the national balance sheet.

The sector was bringing in $39 billion a year until COVID-19 struck – coming in just behind iron ore, coal and gas.

International students, who mostly pay full fees, make up about 29 per cent of university enrolments, or 412,000 out of 1.4 million students.

Currently 87,000 (22 per cent) of foreign students are marooned outside the country.

But as the second semester rolls around, universities will be hit by the loss of another 84,000 foreign students who are due to start their courses.

Even though declining foreign student enrolments will cost the university sector billions of dollars, most are unlikely to suffer a large enough fall in revenue to receive the JobKeeper wage subsidy.

And because many university workers are casuals, most do not meet the scheme’s requirement to have worked for the same employer continuously for more than 12 months.

Treasurer Josh Frydenberg has said that criterion will not change.

“We’re not proposing to change that criteria … What we have done is guarantee funding for domestic enrolments to pre-COVID-19 levels,” Mr Frydenberg told the ABC. 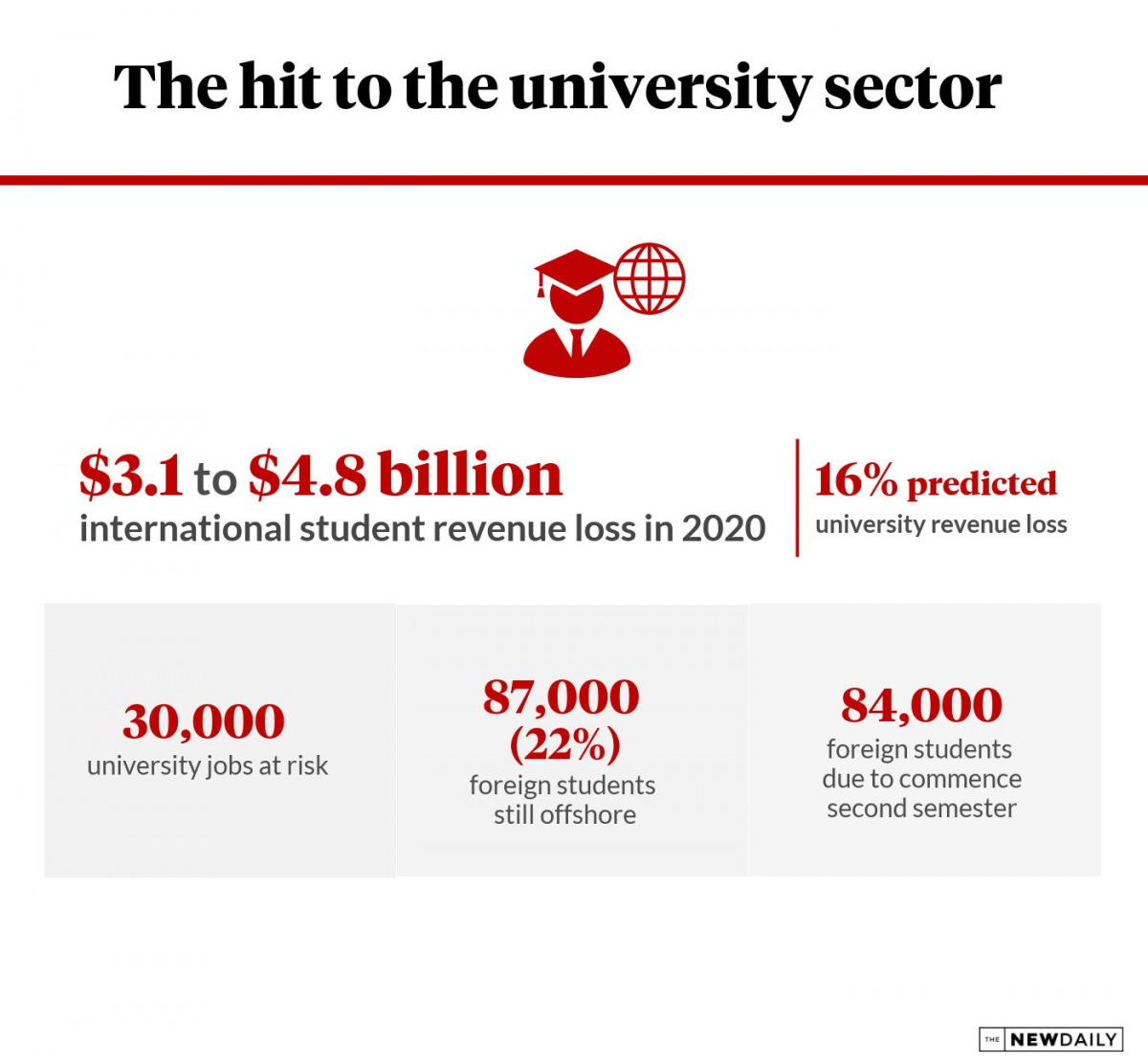 The problem with that stance is that it leaves universities without the funding that they have come to rely on as they built their overseas student business.

“I find it quite extraordinary that the government will not support the universities in the same way that they have supported other industries,” said Nicki Hutley, partner with Deloitte Access Economics.

“The unis have come to rely on income from foreign students and that has been a response to government policy.

“That income stopped as a result of government policy so it would be sensible to support those jobs, which we really need, that are building job skills and training people for the jobs of the future, especially in STEM [science, technology, engineering maths].

“If we don’t value our universities, there is something very wrong.”

University income totals about $30.1 billion a year and UA suggests this could fall by as much as $4.8 billion in the current year.

Although that’s a big figure, it’s only about 16 per cent of overall revenues – barring them from accessing JobKeeper.

However, that figure is likely to increase next year unless our international borders reopen and foreign students return to Australia.

“Some $10 billion has been taken out of the university sector [in government budget cuts] in recent years,” she said.

“That needs to be addressed in broader terms but we also need a ‘UniKeeper’ scheme to support academics.”