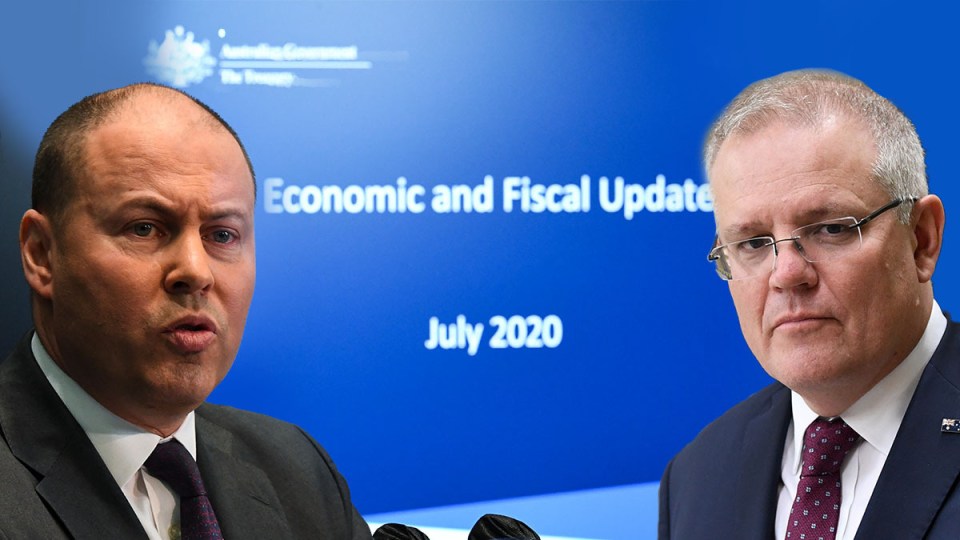 The federal government will deliver a massive budget deficit as it fights to contain the pandemic. Photo: The New Daily

The federal government will record the largest budget deficit since the Second World War as it attempts to cushion the blows of the coronavirus recession.

And there’s more bad news for workers, with unemployment expected to hit 9.25 per cent by the end of the year.

Treasurer Josh Frydenberg revealed on Thursday that the budget deficit is on course to reach a record $184.5 billion this financial year, after hitting $85.8 billion in the financial year just gone.

If accurate, the 2020-2021 estimate will be almost four times the previous record set by the Rudd government after the GFC ($54.5 billion.)

The eye-watering number, which was broadly in line with private-sector forecasts, is a product of record government spending and falling tax receipts.

Combined support measures from the government and Reserve Bank have so far totalled $289 billion, which according to the government is equal to 14.6 per cent of GDP.

“This has driven a dramatic change in the budget’s position,” Mr Frydenberg told reporters in Canberra.

“These harsh numbers reflect the harsh reality we face.”

They also assume the Victorian lockdown will end after six weeks, other state economies will reopen without major setbacks, and our international borders will open up in the first six months of next year. These deficits reveal the real cost to the budget of rejecting lives and livelihoods as a result of the coronavirus,” Mr Frydenberg said.

The Treasurer was also keen to stress that 99 per cent of the stimulus announced so far will be spent in the 2019-20 and 2020-21 financial years and won’t be baked into the budget beyond that.

He nonetheless conceded, though, that “Australia is experiencing a health and economic crisis like nothing we have ever seen in the last 100 years”.

The government estimates that the pandemic will slash real GDP growth by 3.75 per cent this calendar year, before bouncing back by 2.5 per cent in 2021 – albeit from a much smaller base as the economy will have contracted significantly. Of greater concern to most Australians, though, are Treasury’s grim unemployment forecasts.

The official jobless rate, which ignores JobKeeper recipients working zero hours and people who have given up looking for work, jumped from 5.1 per cent in February to a 22-year-high of 7.4 per cent in June.

Treasury forecasts it will peak at 9.25 per cent in the December quarter – though Mr Frydenberg said that without government stimulus it would have risen a further 5 percentage points.

“Between March and May, 870,000 jobs were lost and more than one million Australians saw their working hours reduced, in many cases, to zero. These are mums and dads, sons and daughters, friends and colleagues,” he said.

“Without the government’s economic support measures, unemployment would have peaked at five percentage points higher.

The Treasurer did not reveal economic forecasts for the full forward estimates period, as he said current conditions were too volatile and uncertain to provide helpful forecasts.

He said he will provide these figures, in addition to further policy announcements, when he hands down the budget on October 6.

Peter Dutton touted as next Liberal leader as he claimed victory in Dickson
‘The urgency of the situation’: WHO steps in as monkeypox cases erupt around the world
Volodymyr Zelensky: How war will end as Ukraine ‘breaks backbone’ of Russian army
Jim Chalmers decries Coalition waste as Labor hits the hustings amid downpours in Queensland
Anthony Albanese, Scott Morrison cast their votes in Sydney
Australian aces at French Open out to show there’s life after Ash Barty
Why a Commonwealth-backed paid pandemic leave scheme makes sense
Today's Stories

Australia on course for largest deficit since WW2 after massive stimulus