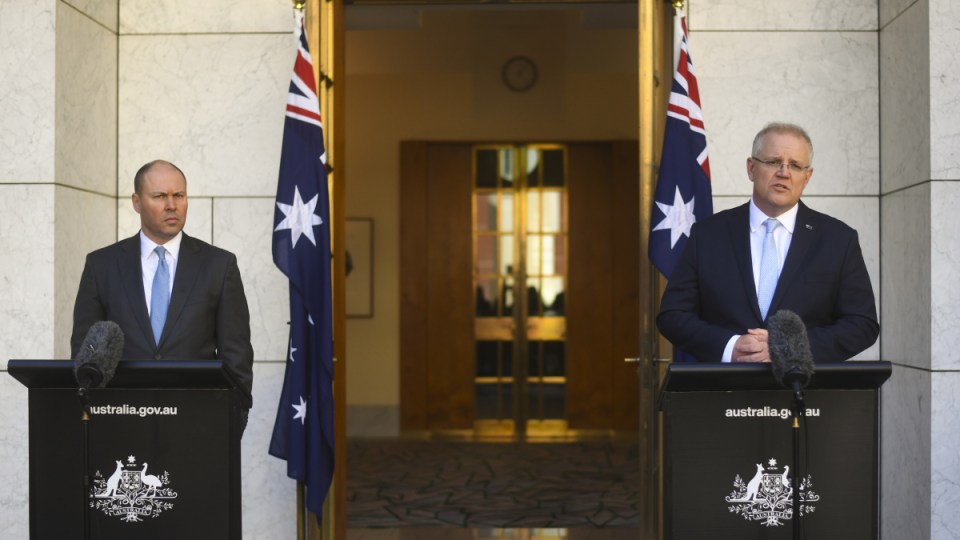 Treasurer Josh Frydenberg will on Thursday announce the largest budget deficit since the Second World War, but economists want him to keep on spending.

Just days after the government announced it would be extending modified versions of JobKeeper and JobSeeker, Mr Frydenberg will deliver a major economic update on Thursday.

The Treasurer will provide forecasts for wages and unemployment across the 2019-20 and 2020-21 financial years, in addition to the usual budgetary details on prices and GDP.

He will also provide an update on government debt levels and the size of the budget deficit, while revealing that government stimulus has so far prevented the loss of some 700,000 jobs.

Meanwhile, Victoria’s six-week lockdown is expected to slash GDP by $3.3 billion, or around 0.75 per cent of GDP growth in the September quarter.

The joint economic response from the government and Reserve Bank has so far totalled $289 billion – of which, $164 billion has come through direct government spending, and $125 billion through loans and loan guarantees.

The government is providing timely economic support with significant fiscal and balance sheet measures that are temporary and targeted, helping those who need it most,” the Treasurer said.

“We carefully designed our economic support measures to ensure we maintained the structural integrity of the budget.”

Although government stimulus so far amounts to roughly 11 per cent of GDP, economists have repeatedly told the government not to worry about borrowing large amounts of money, as interest rates are at record lows, debt-to-GDP is comparatively low, and the unemployment rate will stay higher for longer if stimulus runs dry.

During the economic update, Mr Frydenberg will also explain how stimulus measures are expected to protect an estimated 700,000 jobs – reducing the peak unemployment rate by 5 percentage points.

Based on publicly available data and previous estimates published by Treasury, this suggests the government expects the official unemployment rate to peak at 10 per cent – rather than the 15 per cent forecast by Treasury in April.

But that success will come at a cost.

Although the government has had little choice but to spend record amounts of money to protect the economy, Mr Frydenberg will on Thursday reveal the largest budget deficit since the Second World War.

Westpac predicts it will hit $240 billion this financial year – more than four times the record set by the Rudd government after the GFC ($54.4 billion).

They would have been the first budget surpluses since before the GFC.

“Our announced measures, together with large declines in taxation receipts, has seen a hit to the bottom line, but this has been necessary in order to cushion the blow for millions of Australians, and to keep businesses in business and keep Australians in jobs,” the Treasurer said.

Finance Minister Mathias Cormann added: “In this update we are reconciling the impact of both our policy decisions since MYEFO and the impact of the economic hit from the coronavirus pandemic on revenue, expenditure and the budget bottom line over two years.

“By the time of the Budget [on October 6], we will be in a position to provide all the relevant forecasts and projections over the entire forward estimates period and over the medium term.”

The economic update comes just days after the government drew heavy criticism for announcing cuts to JobKeeper and JobSeeker at a time when unemployment is continuing to rise.

Even though many economists agreed JobKeeper should be modified to ensure money only goes to businesses in need, most argued it was a bad time to reduce the rate, given the jobs market has yet to recover and stimulus payments are propping up spending.

Reserve Bank governor Philip Lowe has also repeatedly said the government will need to provide ongoing support as interest rates are already at record lows – and deputy governor Guy Debelle has said he is comfortable about the government’s ability to service its debt.

Meanwhile, two-thirds of economists surveyed in Wednesday’s monthly joint Economic Society-Conversation poll “strongly agreed” that the Coalition must provide ongoing fiscal support, “even if it means a substantial increase in public debt”.

And the Grattan Institute has argued that the economy needs another $70 to $90 billion of stimulus to bring unemployment back below 5 per cent by mid-2022.