There’s no such thing as a free lunch – or Afterpay transaction.

They cost, on average, 3.9 per cent if you ignore late fees.

That is an expense that is built into the merchant’s overall prices.

If you see the Afterpay sign in a shop and you don’t use the “buy now pay later” fad, you are subsidising those who do. (The company allows customers to split the cost of a product over four interest-free instalments, and only charges them if they pay late.)

And if you think that is silly, after three years as a listed company, the stockmarket is valuing this unsecured consumer credit provider with an uncertain future at $19.3 billion.

That is a rather vast amount of money for a company that had revenue of about $220 million in the latest financial year and doesn’t make a profit.

Yes, folks, Afterpay looks suspiciously like a speculative bubble in what is already a dislocated market where the real value of anything is hard to judge.

The bubble reached fever pitch last week (if bubbles can have a fever in COVID times) as speculators scrambled for a slice of more than a $1 billion worth of Afterpay shares up for grabs.

The company is issuing $800 million worth of new shares to finance expansion and its co-founders, newly minted billionaires Anthony Eisen and Nick Molnar, are taking the opportunity to offload $250 million worth of their shares.

They’ve previously sold off one tranche worth $35 million at the time and another worth $100 million – anyone see a pattern here?

They have promised they won’t sell any more until after the annual general meeting – but that’s only four or five months away.

Just as tech stocks have been the stars carrying the US market higher despite the biggest economic shock since the Great Depression, Afterpay has been the Australian market’s little tech star.

Unsurprisingly, some greybeards hear echoes of the Dot Bomb era, but there are plenty of boosters thinking Afterpay is the best thing since tulips.

The Afterpay mania has been a bit of embarrassment for stockmarket analysts, a subject of some wry grins around the market.

For those who think the stock is overvalued, there is the discomfort of missing out on such a dramatic performance.

For those who suddenly think Afterpay can turn lead into gold, there’s the embarrassment of their earlier assessments that it was overvalued when it was much cheaper.

Oh, did someone mention Citi? Well I have now.

In April, Citi analysts downgraded Afterpay to “neutral” with a target price of $27.10.

They weren’t the only ones feeling a bit negative about the shares of an unsecured credit provider that mainly services the younger, smaller end of the market as the world went into recession that is affecting the younger and smaller most.

On July 2 Citi suddenly turned bullish on Afterpay’s prospects with a target price of $64.25 and – surprise, surprise – a week later was named as one of the two brokers to pick up fat fees as underwriters for the $800 share issue.

Citi, along with NAB, also provides Afterpay’s receivables financing facility in Australia and, along with Goldman Sachs, does the same job in the US.

Basically, they provide the money for Afterpay to pay merchants when someone uses the product. (Goldman Sachs analysts have remained less bullish though with a target price of $25.675 a share, a long way below Friday’s $72.31 closing price.)

Even sceptical analysts have had to lift their valuation as the price has run away.

UBS did a fine job of analysing the company in April and decided on a price target of $13 a share. That target has now been increased to $25.

The reason for the UBS upgrade was the bullish trading update provided by the company with its capital raising announcement.

In keeping with the Dot Bomb techs, Afterpay is big on talking up sales growth, not so loquacious about bottom-line losses; happy to give details about increases in customers and merchants, not so happy to go into details about bad debts.

Afterpay’s favourite number is what it calls “underlying sales” – the amount it finances. That jumped from $5.2 billion to $11.1 billion in the June year – very impressive growth.

Afterpay’s actual revenue though, its net transaction margin, is only two per cent of that – about $220 million. And the percentage has been falling.

On that revenue, it’s claiming earnings before interest, tax and depreciation of $20 to $25 million – which means it’s likely to report a bottom-line loss.

But for every Amazon or Facebook, there are thousands of techs that didn’t.

The risks facing Afterpay are well known – most obviously the danger of bad debts blowing out and margins shrinking as plenty of competition piles into the BNPL space (including a European player in partnership with the Commonwealth Bank).

But the problem less mentioned is the business of non-Afterpay users effectively subsidising those who do.

Afterpay is charging merchants an average of 3.9 per cent for the “free” credit its customers enjoy.

For some small merchants, that charge is as high as 6 per cent, according to the Reserve Bank.

Afterpay forbids merchants from surcharging customers for such a high fee, as they can for much cheaper credit card fees.

RBA figures show even a relatively expensive credit card, American Express, is only charging merchants about 1.4 per cent on average, a charge merchants can add to the customer’s bill if they wish. 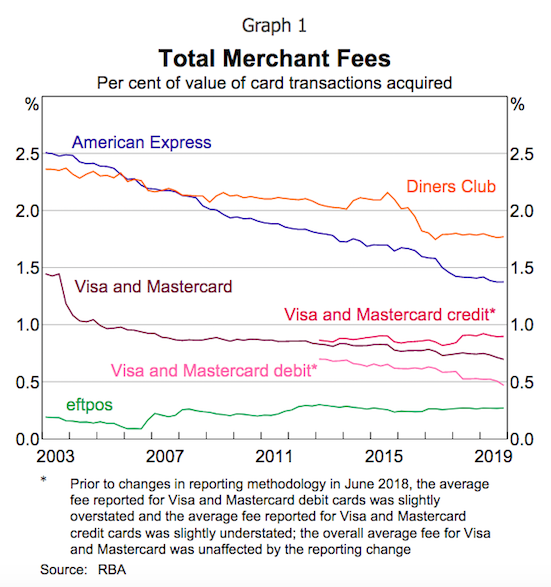 The RBA reckons credit providers stopping merchants from adding that cost to the bill is crook, which is why the bank first of all stopped credit card companies imposing a “no surcharge” rule – and then stopped merchants charging an over-the-top surcharge that didn’t reflect the real cost of using the card.

As the central bank summarised it in a payments system issues paper: “If a business chooses to apply a surcharge to recover the cost of accepting more expensive payment methods, it is able to encourage customers to consider making the payment using a cheaper option.

The RBA is clearly of a mind to ban Afterpay’s surcharge ban, but the process of review has been delayed by the pandemic with a decision not expected until next year.

Afterpay declared this was a key risk in its investor presentation last week: “A change in Australia’s payment system regulations could restrict Afterpay’s ability to limit merchants adding a surcharge on customers who use Afterpay as a payment method. If a material number of merchants did add a surcharge as a result of such a change, it could adversely affect usage of Afterpay relative to other payment methods.”

Afterpay’s submission to the RBA review begging to be excused is as full of self-serving claims as any I’ve seen, topped by this absolute doozy: “Afterpay’s unique characteristics and value proposition to merchants and consumers means it should not be considered a payment system.”

CEO Anthony Eisen also submitted that any contemplation of regulatory reform “should be part of a parliamentary process that has a broader lens than the regulation of payment systems”.

Maybe he thinks the company would have more luck lobbying politicians than staid central bankers – or at least that any such parliamentary process would take years.

And there was this: “The BNPL industry, as a growing and innovative industry, should also be recognised for its efforts to self-regulate and raise standards.”

Yeah, with all the experience we have industries left to self-regulate, sure.

So how is this start-up so quickly worth a ridiculously large amount?

Some of the answer might be in a recent newsletter by the British commentator and investor, Anthony Peters, writing about America’s NASDAQ reaching dizzying heights.

He pointed to the explosive growth of online trading accounts and retail trading volumes since the start of the pandemic and the fondness of retail investors for the dominant tech stocks, then reminisced about Bitcoin’s big run, the dot.com revolution, the real estate bubble and the crash of ’87, all of which smashed retail traders.

“But petty retail and the explosive recovery in stock prices since the March lows are two different kettles of fish,” he wrote.

“The rule of thumb used to be that the moment a taxi driver asked you what you thought of the market you should be heading for the door. The thing is that in the pandemic nobody is taking taxis…

“In order to be good enough to be a trader one needed to be right 55 per cent of the time. Anything above 58 per cent made one a star.

“It’s only when one appreciates that at 58 per cent one is a star that one begins to understand the concept of risk management. It’s not about how to make money when one is right but how not to hand it all back and more when one isn’t.

“The staggering rallies in some of the techs and in one particular automotive company which will be nameless that one is obliged to ask oneself where the risk mitigation is to be found?

“At the end of the day all securities trading is a relative value game so if the hot stocks go on a mission the other boats will eventually and inevitably have to rise on the same tide. That they are doing …

“Owning shares is not a game of click and collect.

“Having done my four decades in markets there is one thing I can confirm and that is that picking entry points is a lot easier than picking exit points or put more succinctly, it’s easier to identify the time to hoover up something which is under-priced than to let it go when it’s overpriced.

“We simply rely on a greater fool being out there who will pay just that little bit more than the last guy.”