More than 620,000 have dropped out of the labour force since March.

And a further 3.3 million are earning wages subsidised by JobKeeper.

Prime Minister Scott Morrison described the latest unemployment figures from the Australian Bureau of Statistics as “heartbreaking” but not surprising.

Economists conceded they were worse than expected.

The figures showed businesses shed another 227,700 jobs between mid-April and mid-May, taking the official unemployment rate to 7.1 per cent, and the number of jobless Australians to almost one million (927,600).

The actual unemployment rate, however, sits around 11.3 per cent, or 1.55 million working-age Australians.

This is because the ABS only defines people as unemployed if they are available and actively looking for work – meaning 623,600 people who have lost jobs since March are classified as having ‘left the labour force’, rather than as newly unemployed.

Alison Pennington, senior economist at the Centre for Future Work, said the data confirms Australia faces “a Depression-level crisis in [its] labour market”.

What comes next, she said, depends on the policies introduced by the federal government.

“I don’t see this shifting any time soon, because the industries that have been most affected by this shutdown are nowhere close to, in inverted commas, bouncing back,” Ms Pennington said.

And government has made no attempts to create jobs for people – particularly young people and women, who have been most affected by this fallout.”

Ms Pennington said government should expand JobKeeper to include workers who currently miss out on the payments, and extend the scheme beyond September to save as many jobs as possible.

Expanding public health care and building social housing would create jobs and satisfy growing demand for these services, while free child care would make it easier for women to enter the workforce.

“One other issue is we definitely need to repair the skills system,” Ms Pennington said.

“A healthy skills system is going to be integral to us being able to pivot through this crisis and train up people, whether they be young people into new jobs, or retraining people out of jobs that are on the down.

“Our skills system is fragmented, haphazard, under-resourced and unco-ordinated. And it’s totally unfit for this challenge that we have coming up.” 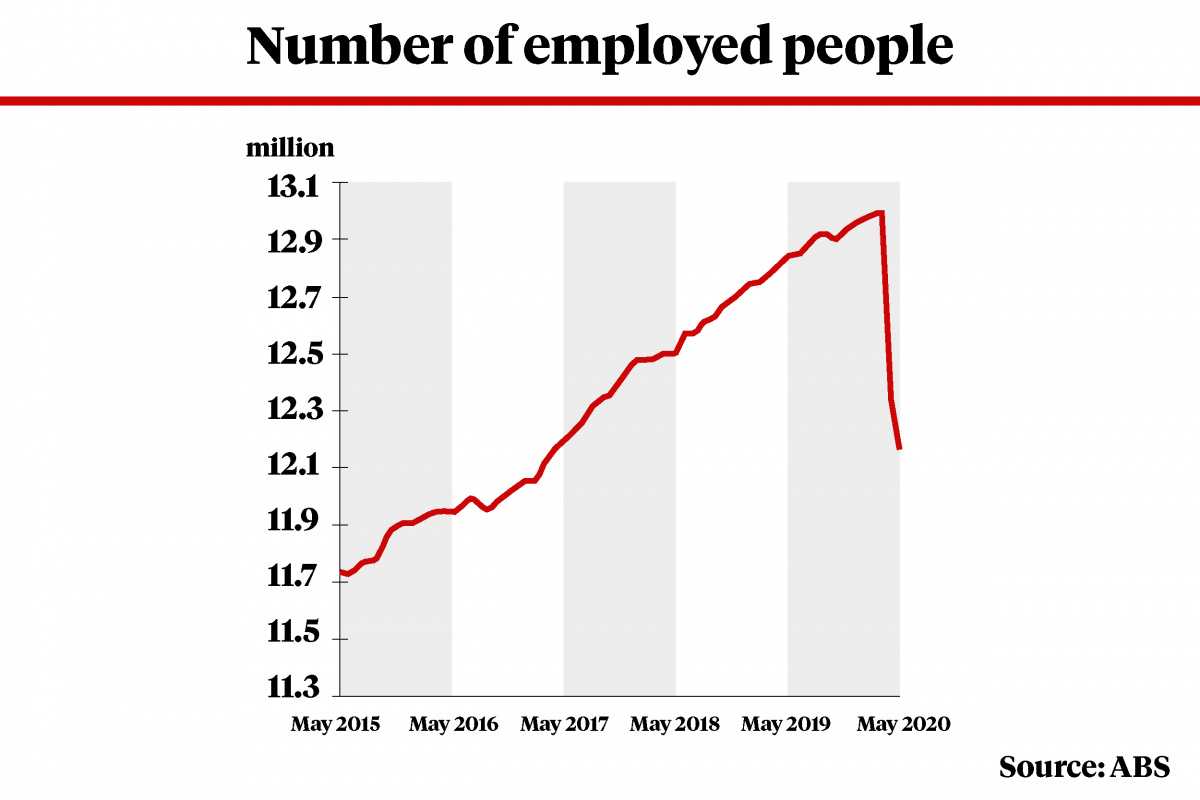 Ms Pennington said “the main story is one of ongoing long-term unemployment” unless government steps up to the plate.

But other economists are cautiously optimistic.

During the coronavirus pandemic, the ABS has released weekly jobs estimates based on Single Touch Payroll data from the ATO.

The latest release came out on Tuesday and showed total payroll jobs increased 1 per cent in May.

Alongside the recovery in consumer spending, the easing of restrictions, and surveys showing consumer confidence has recovered to pre-crisis levels, the marginal increase in payroll jobs has led some to suggest the economy is already on the road to recovery.

“The weekly payroll data on Tuesday, for the week ending May 30, had 14 out of 18 industries adding to the payroll in the month,” EY Oceania chief economist Jo Masters told The New Daily.

“Now, don’t get me wrong, they added to the payroll having cut the payroll substantially. But, nonetheless, it does indicate that the worst of the job shedding is behind us.”

Meanwhile, ANZ senior economist Catherine Birch said in a note to clients that employment and hours worked should pick up in June, thanks to “the faster rollback of restrictions and improvements in activity and spending”.

But there’s a $70 billion elephant in the room.

“The rate of unemployment would also be much higher in the absence of the JobKeeper wage subsidy,” Indeed APAC economist Callam Pickering wrote in a note.

The subsidy is imperfect – failing to cover vulnerable casual workers and certain sectors – but it has preserved the connection between business and their employees.”

“Policymakers should move towards removal or tapering with caution,” Mr Pickering warns.

“A premature removal could pave the way for a secondary recession, job losses and bankruptcies.”