The number of cash withdrawals at ATMs and shop registers has fallen off a cliff since the outbreak of COVID-19.

Most shops have displayed signs asking customers to pay with cards to minimise transmission.

Others have gone further and banned cash outright.

And the shift could be permanent, but don’t just blame the pandemic.

Shops – and shoppers – were turning off cash well before the coronavirus, with research from the Reserve Bank of Australia (RBA) showing our use of ATMs halved in the past decade.

The RBA’s figures show that on average every Australian bank card holder visited the ATM or withdrew cash at the register just 23 times in the past financial year, down from 40 each in 2008.

Meanwhile, at the shop counter we swiped or tapped to pay almost three times more often than we did a decade ago (usually a debit card).

Swinburne University professor and payments researcher Steve Worthington said the pandemic would only speed up that trend.

“What you’re doing is creating a more cashless society because you’re depriving people of the opportunity to pay with cash,” he said.

It shows that the amount of cash withdrawn in dollar terms at ATMs, bank branches and shop registers across the country is now down 35 per cent on the same time last year. Even though cash is becoming less popular with most consumers, Professor Worthington doubts it will ever disappear entirely.

“We’ll become a less cash economy, not a cashless economy,” he said.

That’s because many Australians still think they need to hold on to at least a few ‘pineapples’ for a rainy day. 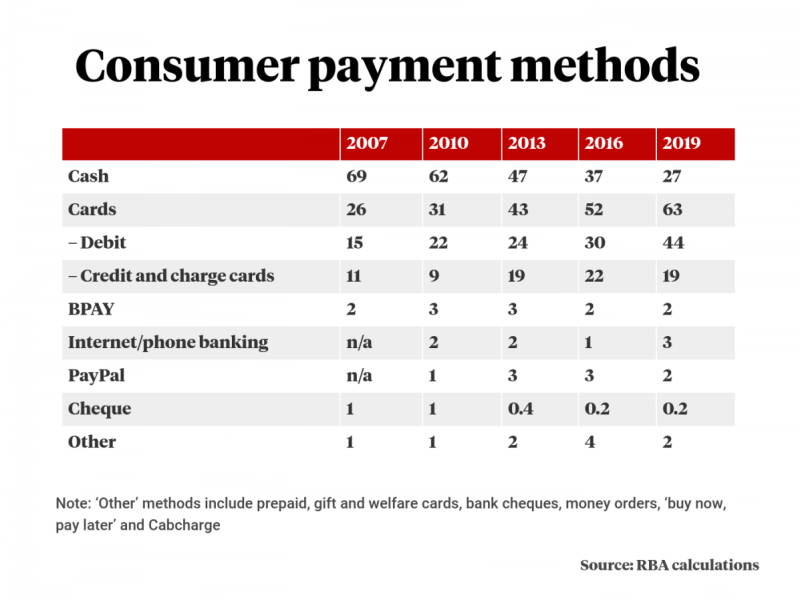 The RBA found in 2019 that almost 40 per cent of Australians held a small amount of cash outside that in their wallets – 45 per cent of whom kept it in case of emergency.

“People will always have cash on hand for those times when they can’t pay for something with their cards or their phone,” Professor Worthington said.

Some customers even began drawing large sums of cash from their accounts in the lead up to the coronavirus shutdown, fearing a possible run on the banks.

Meanwhile, many demographic groups – particularly those in rural areas, the homeless, and the elderly – still rely on cash as a means of payment.

There would be this financial exclusion. You’re almost denying the use of the system because they don’t have the cards or the phones that can handle it.”

“We know that nearly half of Australians have decreased their use of cash when making purchases in person because of coronavirus fears around cash handling,” he said.

We expect new habits in the way we pay will become permanent for many Australians.”

Even so, he is also worried about customers who can’t access digital payments.

“There will need to be some provision for these customers and clear guidance around cash as a form of legal tender,” Mr Zahra said.

The cost of using digital payment platforms will also need to be considered, he said, as many small businesses are overpaying and afraid to negotiate better rates with their providers.

“Saving on unnecessary fees will go a long way to helping retailers get back on their feet as we move towards retail recovery,” Mr Zahra said.